Mosaics cover tens of thousands of feet of the Church of the Holy Sepulchre. Cleaning, analyzing and restoring them is a painstaking process. Photo courtesy of the Mosaic Center, Jericho

JERUSALEM (RNS) The tens of thousands of Christians who visited the Church of the Holy Sepulchre this month got a special Easter treat: the chance to view the newly cleaned and restored mosaic that covers the ceiling and walls of a Franciscan chapel dedicated to Calvary, or Golgotha, the hill where Jesus was crucified.

They might also pause to marvel at this: the work of restoring those mosaics involves a joint effort of Palestinian Christians and Muslims.

The church, whose original structure was built in the fourth century, stands atop the sites where, according to Christian tradition, Jesus was crucified, buried and resurrected.

READ: The ‘Splainer: Was the Last Supper a Passover seder? 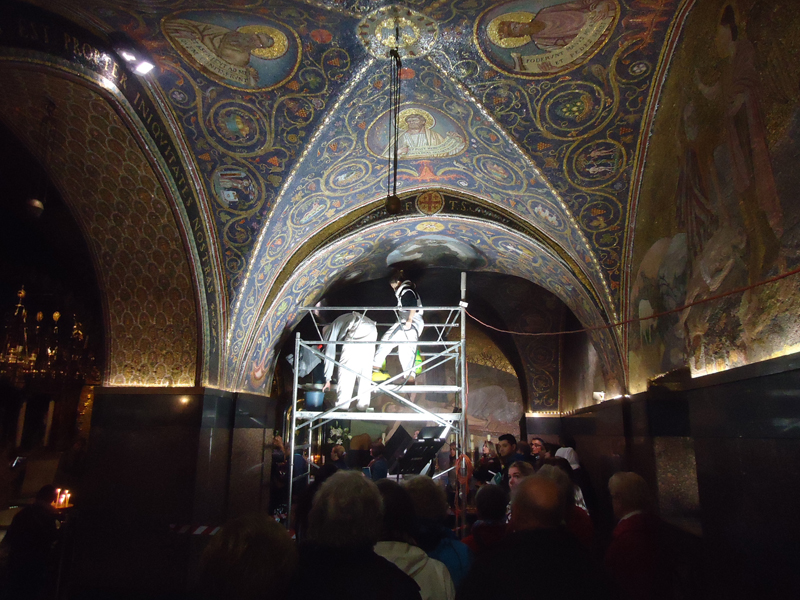 The church contains five of those stations: where Jesus was stripped of his clothes, nailed to the cross, died on the cross, was removed from the cross, and laid to rest.

From a distance, the 1930s Calvary mosaic, located in the church’s basilica, looks like an enormous tapestry. Winged angels, animals, grapevines appear throughout. In one scene, 12 doves fly over a large golden cross; in others, biblical figures, from Abraham and Moses to Paul and Jesus, appear like iridescent constellations in Jerusalem’s rich blue-purple sky. The entire mosaic is made of hand-cut glass, some of it overlaid with gold leaf and then baked in an oven.

The job of caring for it and others that decorate thousands of feet of wall and floor space is the responsibility of a Palestinian team of restoration experts from the Jericho Mosaic Center, based in the West Bank town of Jericho. The town, which is mentioned in the Hebrew Bible, has a rich tradition of mosaic art.

Opened in 2002 by the late Rev. Michele Piccirillo, a Franciscan priest, archaeologist and mosaic specialist, the center — now an independent nonprofit — trains young Christian and Muslim Palestinians in the techniques necessary to restore and protect the Holy Land’s fragile mosaic treasures. It also teaches Palestinian schoolchildren to value and protect mosaics and other artifacts and to view them as part of their Palestinian heritage.

READ: The Judas in each of us (COMMENTARY)

Funding for the center comes from the Italian government, UNESCO, the Franciscan Custody of the Holy Land, foundations and the European Union.

The Calvary restoration was a collaboration between the Mosaic Center and the Association pro Terra Sancta, a group that supports Franciscans working in the Holy Land.

Although foreign and Israeli antiquities experts have been restoring the Holy Land’s sacred and cultural sites for decades, it’s important for Palestinians to care for their cultural heritage, said Osama Hamdan, the Mosaic Center’s director.

“It’s not just a question of repair or conservation,” he said. “It’s an issue of cultural pride and empowerment.”

The center’s Palestinian experts have restored mosaics in iconic churches and an ancient West Bank synagogue. Their re-creation of the mosaics of the Dome of the Rock was widely exhibited throughout the Holy Land.

Hamdan said his center tries to bridge cultural gaps between Muslims, who make up 98 percent of the population in the Palestinian territories, and Christians, who make up only 2 percent.

“We bring schoolchildren to visit churches to explain the history and the importance of conserving all kind of cultural heritage in this country. There are separations, barriers, but we are working to remove these barriers,” he said.

Raed Khalil, a senior mosaic restorer with the Mosaic Center and supervisor of the Calvary project, said most if not all of the church’s mosaics were created by artists in Europe and mounted to the church’s walls and ceilings section by section. 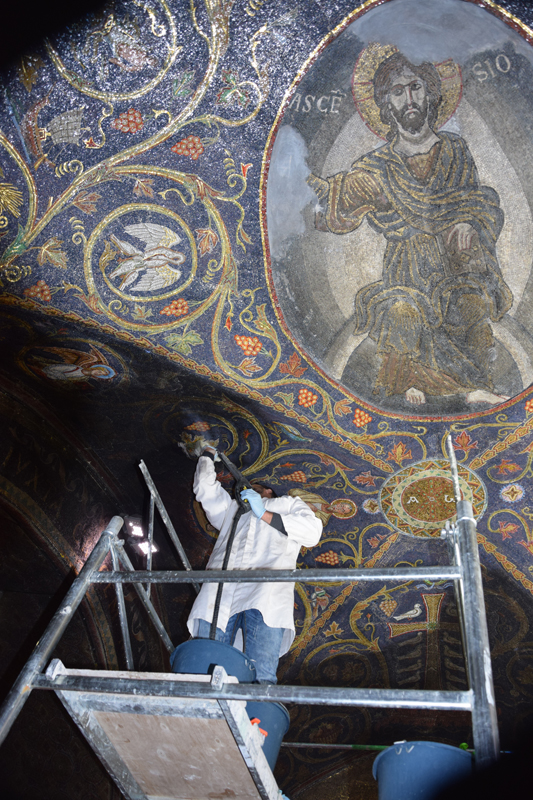 Cleaning the mosaics is painstaking work, but only one element of a much larger process.

“There is the cleaning but also the documentation,” he said. “We take photos and enter the data into a computer. Then we analyze any problems or errors and plan the restoration. Before undertaking a cleaning, the team tests how a small section of the mosaic tiles and grout react to the cleaning materials.

“We survey the area. Are there any lost stones? We place small signs to hold the place where problems exist. If you destroy a mosaic you destroy history,” Khalil said solemnly.

Anas Abu Tiar, a young member of Khalil’s team, said being a Muslim has not stopped him from appreciating the ethereal beauty of the Holy Sepulchre or respecting the Christian faith.

“I have many Christian friends. When it comes down to it, all people are one.”

Khalil, who is also Muslim, said that when he is working in a sacred place “I’m looking at the heritage, not religion or politics. This land is full of history and heritage. My job is to save them.”