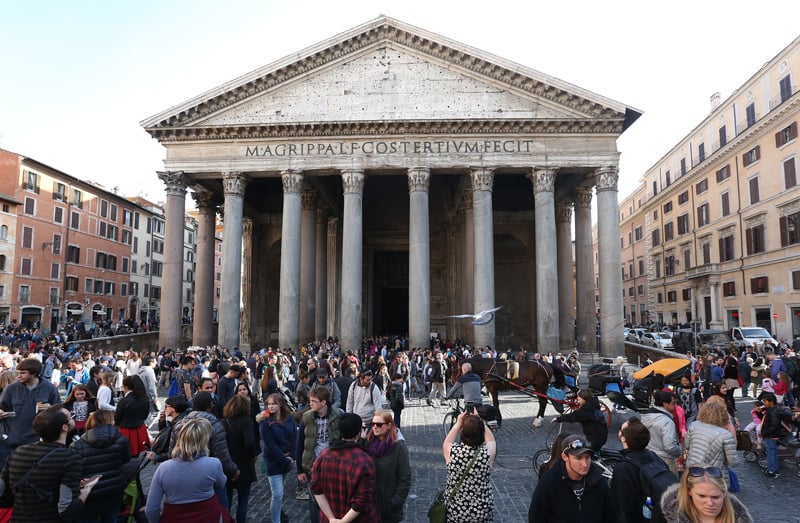 People stroll in front of the Pantheon’s ancient temple in downtown Rome on March 27, 2016. Photo courtesy of REUTERS/Stefano Rellandini
*Editors: This photo may only be republished with RNS-ITALY-CATHOLIC, originally transmitted on March 29, 2016.

ROME (RNS) Italy may be the spiritual home of 1.2 billion members of the Catholic Church around the world, but a new poll shows only 50 percent of Italians consider themselves Catholic.

The poll, published in the liberal daily L’Unita on Tuesday (March 29), challenges long-held perceptions that Italy is a ”Catholic” country, despite the popularity of Pope Francis and the historic role of the Vatican City State in the heart of Rome.

In addition to the 50 percent who consider themselves Catholic, the poll, conducted in Italy by research firm SWG, found that 13 percent defined themselves as “Christian.”

Enzo Risso, research director at SWG, said Italy has witnessed a weakening of religious faith over the past 20 years and a growing trend toward personal spiritual inquiry.

Sixty-four percent of those surveyed said they did not feel part of a religious community. Of those, some said they believed in destiny, horoscopes, reincarnation, Tarot readings and miracle cures.

Monsignor Bruno Forte, archbishop of Chieti-Vasto near the Adriatic Sea, and an adviser to the pope, said the data was “worrying but not surprising.”

“It is not that those who do not believe in God don’t believe in anything; on the contrary, they risk believing in everything, as a ‘surrogate’ to faith, ” Forte, a prominent theologian, told news agency AdnKronos on Tuesday.

In July 2014, Francis appointed Forte as a consultant to the Congregation for Institutes of Consecrated Life and Societies of Apostolic Life, the Vatican group that oversees Catholic religious orders. In October he played a key role in the Synod on the Family.