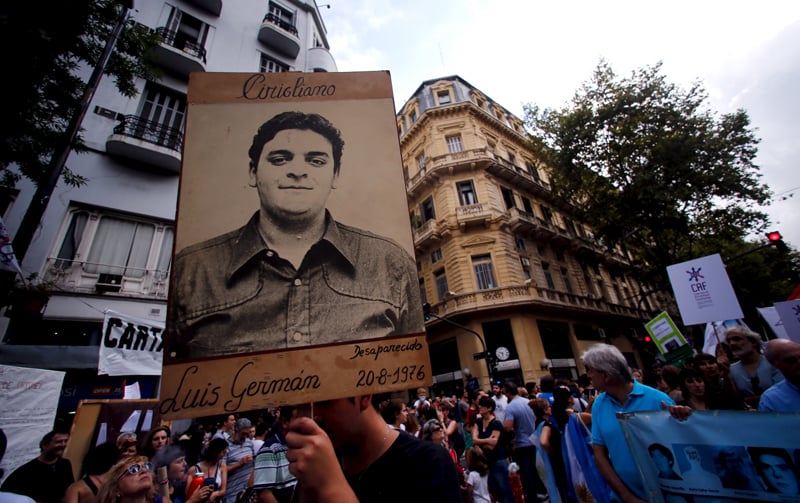 A man holds up a portrait of Luis German Cirigliano, who disappeared during Argentina’s “Dirty War,” during a demonstration to commemorate the 40th anniversary of the 1976 military coup in Buenos Aires, on March 24, 2016. Photo courtesy of REUTERS/Marcos Brindicci
*Editors: This photo may only be republished with RNS-MORELLO-OPED, originally transmitted on March 29, 2016.

(RNS) The announcement that Pope Francis has ordered the Vatican to open its archives from the era of Argentina’s “Dirty War” prompted hope for many that the light of justice could finally shine on one of Latin America’s darkest episodes.

The news from Rome last week (March 23)  followed word that Argentine bishops were declassifying their own archives from the 1976-1983 military dictatorship. Then President Obama, who was in Argentina last week, announced the U.S. would open its records and reveal what Washington knew about the regime, which the U.S. initially supported.

The announcements were timed to coincide with the 40th anniversary of the coup that brought the military to power.

According to Catholic News Service, Monsignor Guillermo Karcher, an Argentine priest and close aide to Francis, said last year that the pope — a native of Argentina and the first Latin American pontiff in history — wanted “something to be done.” Karcher said declassifying the Vatican archives would “shed light on many situations that have been left without explanation.”

So what could be discovered? And why is it important to go back to the years of the Cold War in Latin America? Do we really need to keep digging in the past?

First of all, it is important to understand the Latin American perspective. For us, the “Cold War” wasn’t “cold” at all.

Political violence during that time left an estimated half a million dead and “disappeared” in Latin America. Guatemala alone had some 200,000 fatalities. In El Salvador, there were 60,000 deaths, in Nicaragua 15,000 casualties.

In Peru, first the violence of the “Sendero Luminoso,” or Shining Path guerillas, and then the backlash of state-sponsored terrorism left 70,000 dead. There were 125 political assassinations in Brazil, 140 disappearances in Uruguay, and an estimated 3,000 dead in Chile.

Around 220,000 Colombians have been killed in the longest-running civil war in Latin America. (Francis helped push the Colombian government and a main rebel group, the Revolutionary Armed Forces of Colombia, or FARC, toward a peace agreement.)

In Argentina, there were an estimated 14,000 victims, though there could be many more. Some 9,000 “disappeared” and 2,000 were “officially” killed at the hands of the state, plus around 700 killed by the guerrillas and 2,300 by paramilitary groups.

The war might have been cold in Washington and Moscow, but it was nothing of the sort for Latin Americans.

As Latin Americans we need to make sense of what happened. And for that we have to know and understand the past.

So, where do you start to gather information? Archives are one source among many — they are not the only one, neither do they represent the deposit of truth.

Usually, they are owned by institutions that aim to keep a record of their daily life. In that sense, they have limitations. They reflect the point of view and the struggles of the institution that produces them so they’re hardly “objective.”

Still, the Vatican decision is a significant one for the victims’ families, who wonder if there might be some information in those files about what happened to their loved ones.

We know that the Vatican’s representative, or nuncio, in Buenos Aires for much of that period, Archbishop (later Cardinal) Pio Laghi, submitted lists of the disappeared to the government as well as requests of habeas corpus for some detainees to be brought to court. Other people criticized Laghi for holding those meetings and not having done enough. It is possible there is more information about those meetings and the answers received from the government.

We also know that one of the duties of a nuncio is to report to the pope about the local bishops. And I think here we might find the most substantive data in the archives.

They might reveal details on the tension between the Argentine bishops and the Vatican on some points, and they also may shed light on the thoughts of Laghi about some prelates being too close to Marcel Lefebvre, the French archbishop who led the only schismatic division in the Catholic Church in the 20th century.

But I don’t think we will find decisive things that will take us in new directions. We will fill in gaps, and learn some important details. But we are not going to rewrite history. The church record is well known, and if it’s not the worst among Argentine institutions in those years, it is not a heroic one, either. In reality, most of the bishops were fearful pastors who fell short in taking care of their flock.

Many will surely be curious about any details on the record of the priest who headed the Argentine province of the Jesuit order during that time, the Rev. Jorge Mario Bergoglio — elected Pope Francis in 2013.

After Francis’ election some raised questions about his role in that time, charging that he did not do anything to stop the abuses or was, in fact, complicit. Others say Francis worked mainly behind the scenes to save many people. In any case, I don’t expect to find many documents that will provide much more information about him or his tenure: The Jesuit provincial is simply not an important figure in the Argentine political or ecclesiastical realm.

The real goal of those archival documents, and the point of view of those who produced them, was to fulfill an institutional duty. What they reflect are the positions and the struggle of the bureaucracy that is the Catholic hierarchy, the body that we usually have in mind when we say “the church.”

I don’t think, however, that any institutional archive will shed light on the “actual” church in Argentina — the people of God who suffered persecution and were victims of state terrorism.

For that reason I believe that along with the access to archives we need above all to pay attention to the victims themselves. 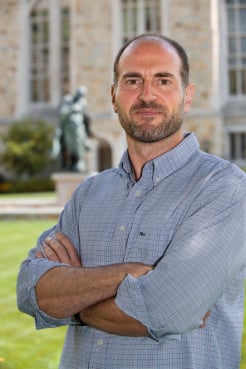 If it is important for the victims, the survivors, and their families to have access to the historical documents, it is also important for their voices to be heard — to be recognized by the Catholic Church as victims of state terrorism and church failure.

On Wednesday (March 23), Francis met with several relatives of some of the victims who disappeared without a trace during the regime’s rule. That’s an important step.

We still need — as Argentines, as Catholics, as human beings — to listen to their stories, struggles and suffering. This is the real unfinished business of the “Dirty War,” a past that is still present.

(The Rev. Gustavo Morello, a Jesuit priest from Argentina, teaches sociology at Boston College and is author of “The Catholic Church and Argentina’s Dirty War”)