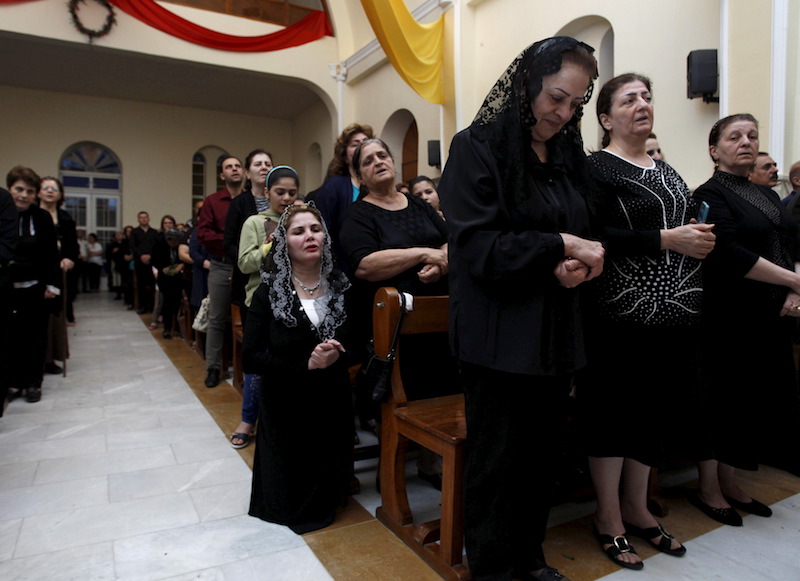 BAGHDAD (Reuters) Iraqi Christians gathered in Baghdad to mark Easter but celebrations were tempered by fears the Islamic State would eradicate their shrinking community, even as the army launched a U.S.-backed offensive to retake Mosul, their ancestral homeland.

In mid-2014, Christians in Mosul were forced to flee when Islamic State seized the northern city and began destroying centuries-old religious sites, ending a presence that once numbered in the tens of thousands and dates back to Christianity’s earliest years.

U.S.-backed Iraqi forces launched an offensive against Islamic State last week touted as the beginning of a broader campaign to clear areas around Mosul, though progress has been slow.

“We are threatened with extinction. This is a harsh word but every day we are being depleted. Our people are travelling, migrating,” said the Rev. Muyessir al-Mukhalisi, a priest at Saint George’s Chaldean Church in east Baghdad.

Like millions of other Iraqis forced to leave home by the Islamic State’s seizure of a third of the country, members of the Christian minority have moved from northern towns and villages to the capital or other cities, and many have joined the masses fleeing to Europe.

Their numbers have fallen to a few hundred thousand from about 1.5 million before the U.S.-led invasion in 2003.

Around 250 worshippers packed the pews for a Good Friday mass at the Catholic church fortified with concrete blast walls, concertina wire and armed policemen.

Boys reenacted the crucifixion of Jesus Christ and the congregation sang hymns alternating between Arabic and a variant of the ancient Aramaic language spoken by Jesus.

The church provides food and money to 45 families displaced from Mosul by the ultra-hardline Sunni Muslim militants, who issued an ultimatum to Christians in 2014: pay a tax, convert to Islam, or die by the sword. The jihadists then stripped hundreds of Christian families of their possessions as they fled.

Huda Meti Saeed, 30, who attended weekend services with her husband and three young children, said her family left Mosul two years ago. An uncle living there was kidnapped and killed around the same time.

“We cannot return. Our neighbours came and took our house. They wanted to take us hostage and take all our valuables,” she said.

The family does not plan to emigrate but even if the militants are soon expelled, Saeed said she ruled out taking her family back to Mosul, the largest city in the north where Sunni and Shi’ite Muslims, Christians and Yazidis once coexisted.

“Very few people are thinking about returning to Mosul,” she said.

Turn the other cheek

Bishop Basilio Yaldo preached against retribution on Friday (March 25), telling worshippers that Jesus’s message of forgiveness had never been more relevant than it is today in Iraq.

Some Christians fight with the security forces while others have taken up arms and formed militias to defend their lands against Islamic State on the plains of Nineveh near Mosul, but the cleric’s message seemed to resonate with attendees.

“Since we were young, we were raised that there should be love and tolerance,” Reem Paulis Saada, a 27-year-old church volunteer, said after the mass. “I will not seek revenge. What would I gain from revenge? It will come back to hurt me.”

Saada, a pharmacist who devotes much of her free time to the church, added that although she was not hopeful about the future in Iraq, as one of the last members of her family still living in the country she felt bound to stay.

Christianity in Iraq dates back to the first century, when it was said the Apostles Thomas and Thaddeus brought the gospel to the fertile flood plains of the rivers Tigris and Euphrates.

The country is traditionally home to many different Eastern Rite churches, both Catholic and Orthodox, and their presence was once a sign of Iraq’s ethnic and religious diversity.

But now Christians say they are often denied freedom of expression in the predominantly Muslim country, and like many Iraqis, lack security, basic services and economic opportunity.

“The issue is: what comes after the liberation of Mosul?” said Mukhalisi, the priest, suggesting the Baghdad government needed to do more to protect Christians in areas under its control. “Thinking only about liberating Mosul does not provide relief to Christians.”