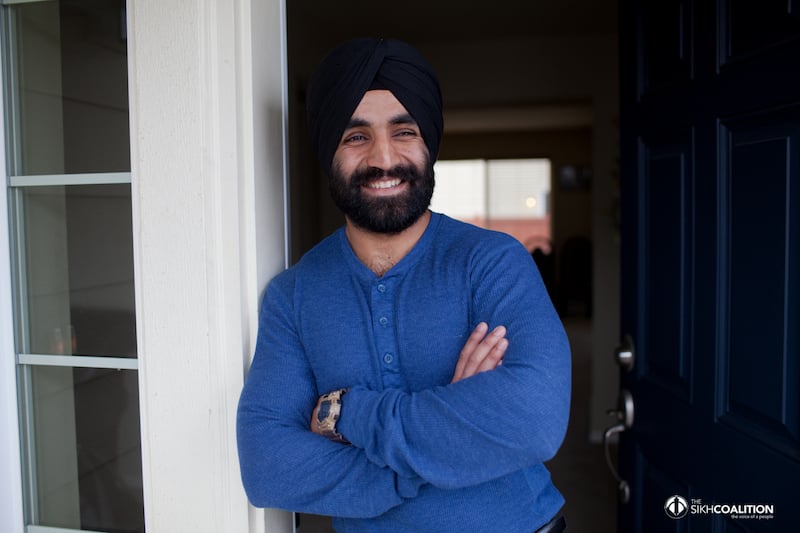 U.S. Army Capt. Simratpal Singh is the first to be allowed to maintain his religiously mandated beard and turban on active duty. Photo courtesy of The Sikh Coalition

(RNS) A decorated veteran Sikh officer is the first to win an approval from the U.S. Army to continue on active duty while maintaining his religiously mandated beard and turban.

The Army issued a decision Thursday (March 31), concluding that to allow beards for medical reasons but ban them for religious reasons is a discriminatory bar to service for Sikh Americans, according to a statement from the Becket Fund for Religious Liberty, one of the law offices that argued his case.

Capt. Simratpal Singh, a West Point graduate, an Army Ranger, and a veteran who earned a Bronze Star in Afghanistan, “proves to our military that the religiously mandated turban and beard do not hinder the ability to successfully serve,” said Sikh Coalition Legal Director Harsimran Kaur in a statement Friday. “This decision gives hope that our nation’s largest employer is making progress towards ending a policy of religious discrimination.”

Singh, who is assigned to battalion operations staff in Fort Belvoir, Va.,  said in the statement: “My faith, like many of the soldiers I work with, is an integral part of who I am. I am thankful that I no longer have to make the choice between faith and service to our nation.”

Three other Sikh soldiers are pursuing similar accommodation, according to the Sikh Coalition. The Becket Fund and McDermott Will & Emery filed another federal court lawsuit on Tuesday asking the Army to allow the men to enter basic combat training while still wearing their beards and turbans.

Debra Wada, assistant secretary of the Army, granted Singh’s request and gave notice that the Army will “gather information to develop uniform standards for religious accommodation,” according to the decision.

“Captain Singh’s case is a painful study in the onerous hurdles for observant Sikh Americans who want to serve their country,” said McDermott Will & Emery partner Amandeep Sidhu. “With this historic accommodation, we hope that the U.S. military will finally move past protracted, case-by-case religious accommodations and recognize that the time for permanent policy change is now.”