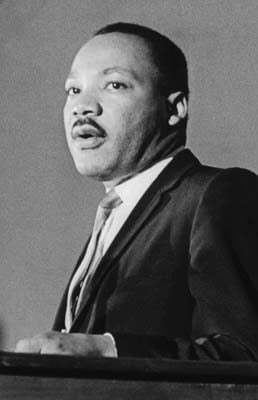 (RNS) The Rev. Martin Luther King Jr. spent the night before his death rallying a group of sanitation workers in Memphis, Tenn., to continue their strike for better wages.

This week, as we mark the 48th anniversary of the assassination of this iconic civil rights leader who committed his life to nonviolence and social justice, we must also remember to rebuke the divisive, racist, sexist, xenophobic rhetoric monopolizing the 2016 presidential election.

All Americans, but especially believers, must remember to put their faith ahead of their fears and finish the important work King started.

When we celebrate the legacy of King yet fail to embrace his struggle, we deprive ourselves of the spiritual and political revolution for which King lived and died.

READ: If Tocqueville were alive, he would worry about our national character (COMMENTARY)

The son of a Baptist pastor, King’s approach to activism was rooted in religion. Drawing on the parable of Lazarus and the rich man in the Gospel of Luke, King once preached that the failure to treat each human being as worthy of dignity and respect would result in hell, which he defined as the pain we inflict on ourselves when we disobey God’s plan for humanity.

Lazarus, the beggar outside the rich man’s gate, ends up in heaven; the rich man, in hell. King argued the rich man wasn’t punished for being rich, but because he did not see the poor. Day after day, he passed by Lazarus without looking at him.

Sadly today’s political landscape is no different as the rich discard the poor, the downtrodden and the marginalized, while celebrating the privileged, boastful and arrogant. This election is a fight for the soul of our country. Will we be the land of the free and the home of the brave or a nation of walls and incendiary rhetoric?

As political candidates seek to divide our communities, King’s clarion call for a multifaith, multiracial coalition of freedom fighters to stomp out injustice couldn’t be more pressing.

During the last year of his life, King fought valiantly to unite a wide range of Americans around the value of economic equality. He worked tirelessly to unite the labor and civil rights movements because he understood that at the heart of segregation lay an abusive economic system that disenfranchised not only blacks, but also poor whites, Latinos, Native Americans and women.

He persuaded fellow clergy and compelled the middle class to overcome their privilege and to participate in efforts like the Freedom Summer of 1964 and the historic march from Selma to Montgomery that helped to pass the Voting Rights Act of 1965.

On the evening of April 3, 1968, in front of an audience of labor leaders and clergy whom he hoped would support the striking sanitation workers, King told the biblical story of the good Samaritan who helped an ailing traveler on the road to Jericho.

King called for a kind of “dangerous unselfishness” to get us to the mountaintop. The road to Jericho was treacherous; full of threatening twists and turns. The Samaritan, “a brother of another race,” had the courage to stop and help the victim.

Authoritarian leaders emerge when inequality is rife. Our collective failure to address inequality has much to do with the disaster of Republican presidential candidate Donald Trump. We are at a crossroads. We can challenge Trump or we can protect our own partisan interests. We can rein in policies that protect economic elites at the expense of the rest of America, or we can create an economy that treats working families and communities with dignity. We can find commonalities with immigrants, hurt by the same trade policies as the people in Flint, Mich., and Detroit, or we can build more walls and deport more children.

Harkening back to the story of the good Samaritan, King concluded, “Either we go up together or we go down together.”

It’s time that we all become good Samaritans and go on this journey together.

(The Rev. Jennifer Butler is CEO of Faith in Public Life. Follow her on Twitter at @JenButlerFPL)