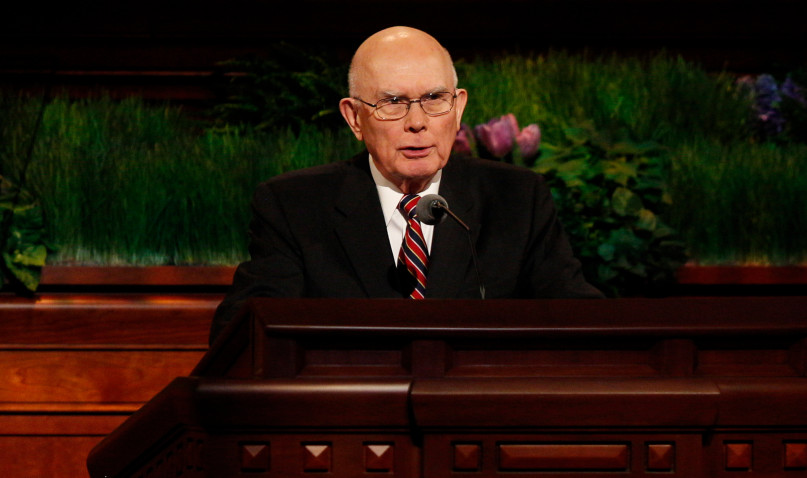 Dang it. I told you guys that if there was a General Conference talk that would disturb the happy and peaceful bubble I was in from having only heard half of GC this past weekend, I’d appreciate it if you wouldn’t tell me about it.

But you did. Because I missed Elder Dallin H. Oaks’s “Opposition in All Things” talk on Sunday, I never heard this statement that has bothered me quite a bit since I first read it yesterday:

God rarely infringes on the agency of any of His children by intervening against some for the relief of others. But He does ease the burdens of our afflictions and strengthen us to bear them, as He did for Alma’s people in the land of Helam (see Mosiah 24:13–15). He does not prevent all disasters, but He does answer our prayers to turn them aside, as He did with the uniquely powerful cyclone that threatened to prevent the dedication of the temple in Fiji; or He does blunt their effects, as He did with the terrorist bombing that took so many lives in the Brussels airport but only injured our four missionaries.

So terrorism and physical disasters can be averted for righteous Mormons who pray, but not for other people?

More than two dozen people are dead after the terrorist attacks in Brussels two weeks ago. I’m grateful that all four of the LDS missionaries who were injured at the airport that day are going to recover. But to suggest that the Lord will “blunt the effects” of evil acts for Latter-day Saints and not for others is a slippery theological slope.

First of all, even within our own narrow community, you would then have to account for all of the missionaries who have in fact been killed while serving the Lord on their missions. Why would God choose to save these four missionaries, when others have died from car accidents (here and here), illness (here), and violent crime (here)? Were they not righteous enough?

Such deaths are uncommon, but they do happen. So whenever we’re tempted to argue that God intervened to save missionaries in Belgium, we’re on the hook for explaining why other missionaries in other places have died.

Secondly, and more importantly, we pit Mormonism against the world. We diminish God into a pocket deity who cares the very most about Mormons, who constitute about two-tenths of one percent of the world’s population.

The other 99.8% will have the full force of nature unleashed on their children while our pocket deity intervenes to save one of our buildings. Our temple dedication goes forward, which is a sign of the Lord’s favor, while 42 Fijians are dead and thousands more are homeless?

In Elder Oaks’s defense, there is a strong biblical precedent for this kind of theology. Much of the Old Testament chronicles God’s protection and favor for a tiny minority, the Israelites, in far more violent terms than the ones Elder Oaks employed in General Conference.

Where you don’t see that theology, however, is in the New Testament. Jesus had countless opportunities to play the theodicy game, including the time he was asked, “Who sinned, this man or his parents?” to explain the existence of a man born blind since birth.

Jesus answered that neither the blind man nor his parents had sinned — a radical departure from the beliefs of his time — and suggested that his suffering might be a window through which God’s works might be displayed more fully. (Which is not the same as saying that God caused the blindness, just that God could use it for God’s glory.)

Throughout the gospels Jesus points to suffering and death as necessary, and sanctifying, things. I feel that Elder Oaks’s talk had many good things to say about the holy role that opposition and suffering can play in our lives . . . which he then qualified or even negated by suggesting that God sometimes removes suffering from a very, very few Latter-day Saints.

Flunking Sainthood
If Mormons could just hang out in the church building
Follow us on Facebook!
Submit your photos to RNS