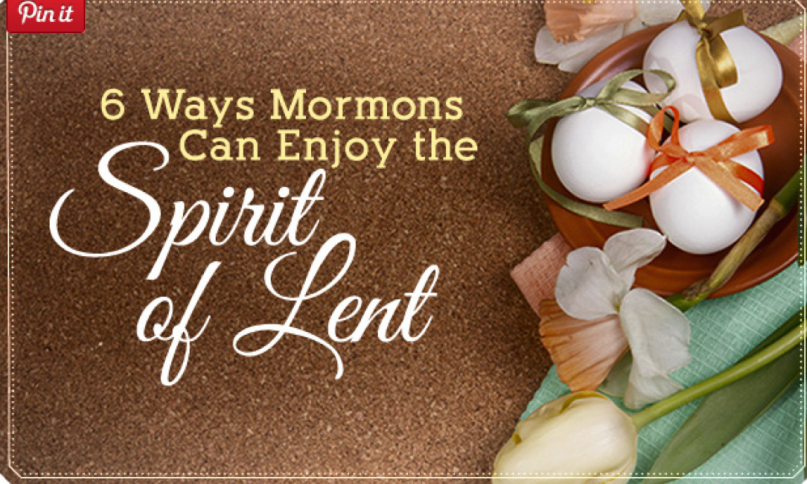 I love getting the ashes placed on my forehead, a startling reminder each time I catch myself in the mirror that what awaits this body is death.

I love the entire Lenten season, a time of penitence and reflection, and the community of people that observe it. “What are you giving up?” we ask each other. “What are you doing this year, and why?”

But until very recently, there’s been little intersection between what I sacrifice during Lent with the wider Christian church and what I do within my own church, because Mormons traditionally have ignored Lent entirely. In fact, on Ash Wednesday last year I wrote:

Mormons persist in a stubborn optimism that rarely dwells on pain or suffering. Sometimes, this relentless cheer is one of the things I like most about my religion; we are a people who look on the bright side and are not cowed by difficult circumstances.

At other times it makes me crazy. It is ironic that Mormonism—the same religion that says Christ’s atonement was accomplished not only on the cross, but also in the Garden of Gethsemane—is averse to any depiction of the reality of Christ’s pain. In our churches you will not only never see a crucifix depicting the actual crucifixion of Jesus, but rarely even an empty cross to represent his resurrection.

But rumblings in various pockets of Mormondom suggest I’m not the only Latter-day Saint who finds our cheerful omission of Christ’s suffering strange, even theologically impoverished. Last year I began noticing, anecdotally, more Latter-day Saints giving Lent a try. Many were interested in the idea of giving up something for six weeks — a favorite food, a questionable habit. And while self-improvement has never been the goal of Lent, I can see how Mormonism’s love of self-improvement can provide a “way in” for Latter-day Saints to stay open-minded about the Lenten season. It’s a start, anyway.

Still, I was pleasantly surprised this morning to find that LDS Living magazine is offering a feature story on “6 Ways Mormons Can Enjoy the Spirit of Lent.” Lent is gaining a little more traction in the orthodox LDS community.

The “six ways” begin by emphasizing the sort of self-improvement regimen that I’ve been seeing, but then graduate to something deeper:

“The point of observing Lent—however you decide to do it—is to find more meaning in the Easter season and draw closer to Christ,” the article notes.

AMEN TO THAT. Getting to Easter in a more meaningful way is the whole point. And that means we cannot ignore Christ’s suffering.

I noticed in some of the comments on my Ash Wednesday post last year that some Mormons can be adamant about not wanting to dwell on suffering. It’s not called the Great Plan of Happiness for nothing, said one reader. The idea seemed to be that Christ suffered so we would not have to, so why would we turn that on its head?

Here’s an answer, and it comes from our own scriptures: “For it must needs be, that there is an opposition in all things” (2 Nephi 2:11, Book of Mormon). We re-enact Christ’s suffering during Lent because without going through at least an iota of his misery, there is no joy of Easter. We will not understand it.

Later today, I will receive the ashes on my forehead and be told I am dust and to dust I will return. For six weeks I will live as if this were true. It will certainly feel true, because life is suffering.

But then Easter will come, and I will understand anew that There Is Something More. Yes, what awaits this body is death, but also life everlasting.

Saved by the City
How We Survived the Great Evangelical Betrayal
Follow us on Facebook!
Submit your photos to RNS