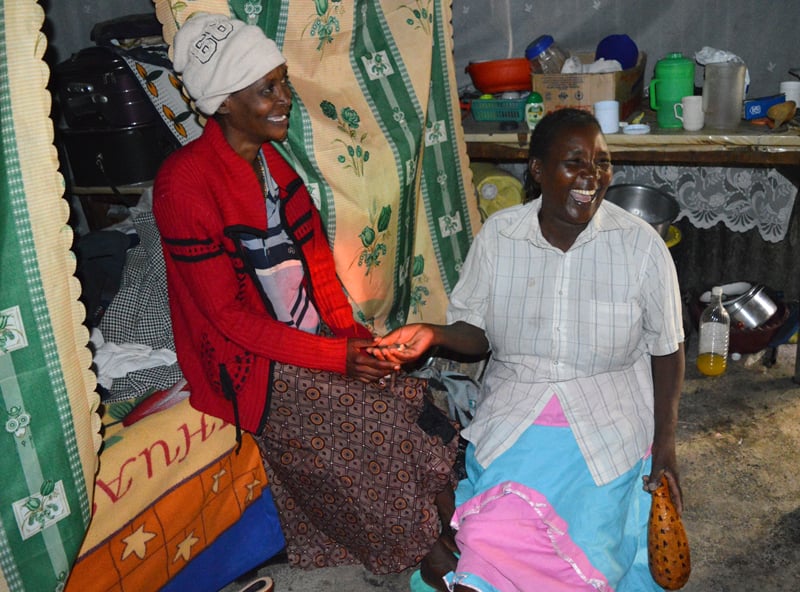 A traditional healer in Eastern Kenya, right, shares a light moment with a patient in a 2014 photo. Healers like this one have joined with Christian leaders to help detect and refer mental illnesses to clinics in Makueni. Religion News Service photo by Fredrick Nzwili

WOTE, Kenya (RNS) Across Africa, many people believe mental illness is caused by curses, witchcraft or demons. In such places, traditional medicine has long remained the first line of treatment.

But a novel program in Eastern Kenya is working to change those perceptions and help the mentally ill receive better care.

The Africa Mental Health Foundation, a Nairobi-based nongovernmental organization, is partnering with a U.S. hospital and a Canadian government program to collect data on the mentally ill via an online platform that will allow traditional healers, clergy and community health workers to work together to direct mentally ill people to primary care centers.

The partnership was born out of an acute need: In Makueni County, located between Nairobi and Mombasa, it is not unusual to find mentally ill people confined to homes or roaming the streets for lack of medical care and residential facilities. 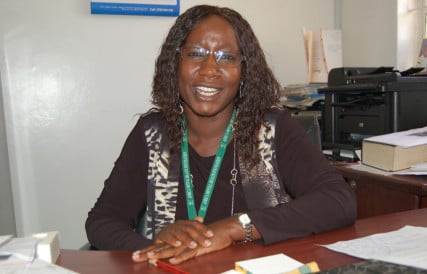 Dr. Victoria Mutiso, a clinical psychologist who is a director at the Africa Mental Health Foundation, a Nairobi-based nongovernmental organization that does research on mental and neurological health and substance use, during an interview at the organization’s office in Nairobi on March 23, 2016. Religion News Service photo by Fredrick Nzwili

“When there are signs of mental illness, the community member first takes their relatives to the traditional healers so that demons are cast out,” said Dr. Victoria Mutiso, director of the Africa Mental Health Foundation.

But rather than undermine traditional healers, the foundation seeks to partner with them to gain direct access to the Kenyan rural population in need of care.

With a $500,000 grant by the Canadian government and $500,000 from the Makueni County government, the project is now scaling up and adding expertise from New York’s Columbia University Mental Health Program.

In its initial phase, the project helped identify 500 mentally ill people out of nearly 1,600 referred to the clinic.

The World Health Organization estimates that 450 million people are living with a form of mental disorder. The WHO warns that depression, the most common type of mental illnesses, will become the second leading cause of disability by 2020.

According to the African Population and Health Research Center, 5 percent of Africa’s population suffers mental illness, but the number is thought to be underreported and is expected to increase significantly in the coming years.

But Kenya sorely lacks the resources to tackle the problem. It has an estimated 500 psychiatrists and psychologists for more than 40 million people. This shortage of professionals, combined with limited drug supplies and stigma, leaves most of those living with mental illness unable to access treatment or even have their illness diagnosed. 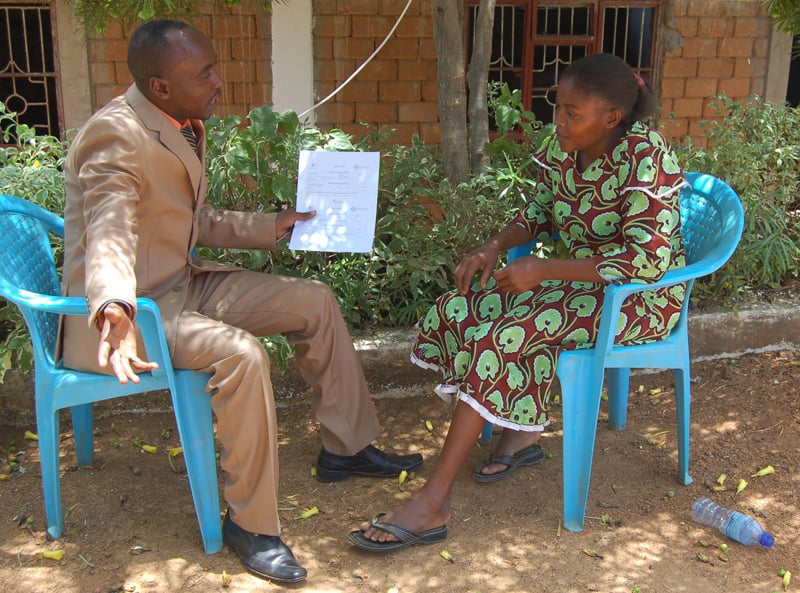 “Most families don’t think it is important to spend money on treatment,” said Muendo. “They neglect the persons, believing they cannot recover.”

Another obstacle to care is people’s perception of mental illness.

“There is still a huge barrier between contemporary medicine and traditional medicine, which we are working to break,” said Mutiso, who is a clinical psychologist.

Convincing healers to join the program and keeping healers, clergy and medical experts on the same page has required a lot of open discussion and a willingness to protect each other’s work and territory.

“It took a lot of dialogue and still takes more even now, but it is working,” said Mutiso. “For us to get a traditional healer to write a referral note, which they do and give to the patient and the patient takes to the clinic and clinician accepts and takes that referral note, is in itself a huge barrier broken.”

As part of their training, faith healers and clergy learn to check for symptoms and fill out documentation that might help doctors treat patients.

So far, traditional healers such as Queen Muli, a healer from Sultan Hamud, a town in Makueni County, have not cited any tensions with clergy or with modern medicine. 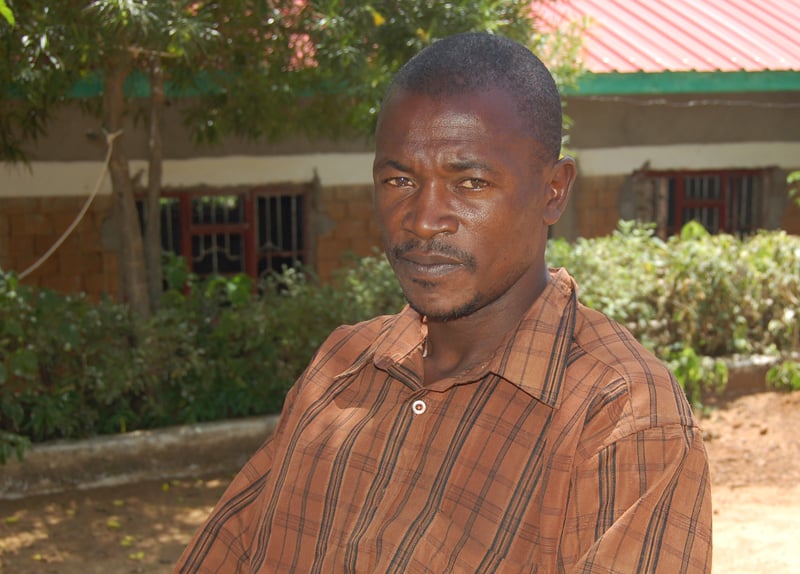 Stephen Juma, who is recovering from depression, signed a referral note in the presence of Pastor Ezekiel Musembi on March 28, 2016. Religion News Service photo by Fredrick Nzwili

“We have no problem since there are those sicknesses that we can treat and those we cannot,” said Muli. “I have referred to the clinic people with problems such as alcohol abuse, epilepsy and others.”

Asked whether the referrals might cause her to lose income for traditional healing sessions, she added: “We are one community. Even when we are not in this program, we meet in social gatherings. I don’t have a problem with them, and neither do I think the clinics and their officers are taking away our income.”

Stephen Juma said the program has already proved its worth. For several years, depression had almost driven the 40-year-old father of 12 to suicide.

“I had battled an inner voice that kept telling me, ‘Kill yourself,’” he said. “It was when I met a pastor in the project that I realized what I was facing could be solved by opening up.”

Juma, who was referred to a medical clinic in town, believes many people are suffering serious mental conditions but are afraid of seeking help.

“We believe reaching people with mental illness is what brings us together,” added Ezekiel Musembi, the general secretary of the Makueni Pastors Foundation, echoing Juma’s sentiments. “Mental illness does not affect Christians only, but everyone in the society.”