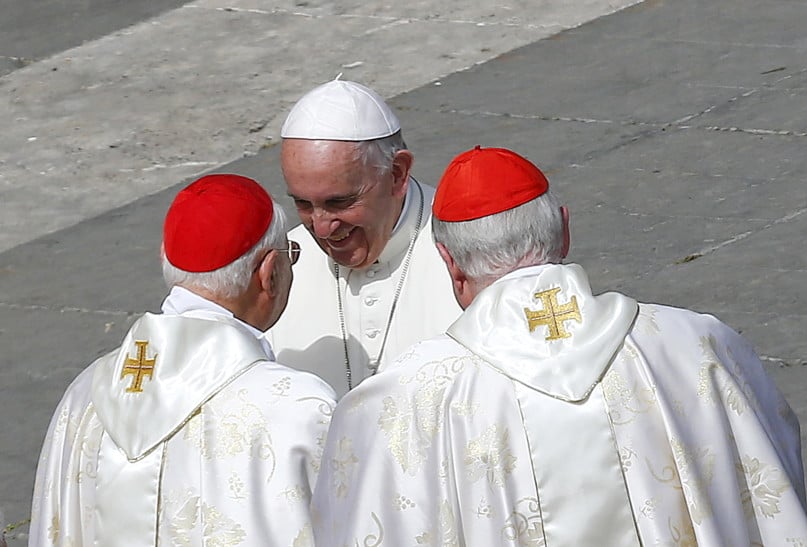 Pope Francis greets cardinals at the end of a Jubilee Mass in St. Peter’s Square at the Vatican, April 3, 2016. REUTERS/Tony Gentile

But stressing the need for “a healthy dose of self-criticism,” Francis used the document to outline his views on how the church should respond to modern-day realities of family life, going so far as to encourage husbands to do more household chores and parents to put down their mobile phones.

The much-anticipated text, running to 263 pages in English and released on Friday (April 8) in six languages, is titled “Amoris Laetitia” (The Joy of Love) in a reflection of the positive tone favored by the pontiff.

Following a two year process involving two synods of bishops and questionnaires sent in from parishes around the globe, the document is the pope’s response. He says the hierarchy must adapt to challenges at the local level.

“At times we have also proposed a far too abstract and almost artificial theological ideal of marriage, far removed from the concrete situations and practical possibilities of real families,” the pope wrote.

An apostolic exhortation does not carry as much weight as an encyclical and is not considered doctrine. But it does advise lower-level clergy on its implementation.

While emphasizing the importance of church teachings, Francis said not all issues need to be settled by interventions from the Magisterium, namely the pope and bishops. “Different communities will have to devise more practical and effective initiatives that respect both the church’s teaching and local problems and needs,” he said.

Francis described as “reductive” the approach of simply considering whether a person’s actions correspond to a rule, paving the way for pastoral discernment on issues such as remarried divorcees.

Although the pope did not go as far as allowing divorcees who have remarried the right to receive Communion, he said it was important for them not to feel excommunicated, “and they should not be treated as such, since they remain part of the ecclesial community.”

The nine-chapter document was woven with references to religious texts and the views of bishops’ conferences from around the world.

A key area debated during the synods was the church’s response to same-sex unions, which Francis said could not be equated with marriage. “No union that is temporary or closed to the transmission of life can ensure the future of society,” he wrote.

In adopting a more compassionate tone than his predecessors, however, Francis called for all people to be respected, regardless of their sexual orientation, and that “respectful pastoral guidance” be provided for families who have gay relatives. The pope did not move to change the church’s definition of same-sex relationships as “intrinsically disordered.”

In writing “Amoris Laetitia,” Francis has dedicated considerable time to the role of education, both for children and young couples. He lamented that the church has not always provided solid guidance to young married couples, stating: “They do not need to be taught the entire catechism or overwhelmed with too much information.”

He instead made proposals such as older couples providing guidance, warning “we can no longer be like a factory” producing courses for newlyweds that are poorly attended.

Additional snippets of advice for spouses include the importance of looking at each other, having a routine that is broken by the occasional party and viewing the sexual dimension of marriage as “a marvelous gift to his (God’s) creatures.”

Parenting is discussed at length alongside education, with Francis criticizing sex education in non-Catholic schools. “Frequently, sex education deals primarily with ‘protection’ through the practice of ‘safe sex.’

“Such expressions convey a negative attitude towards the natural procreative finality of sexuality, as if an eventual child were an enemy to be protected against,” he wrote.

Francis remained firm in the church’s opposition to contraception and abortion, describing the “horrendous contradiction” of a life being “rejected and destroyed” within a family. “Let us pause to think of the great value of that embryo from the moment of conception,” he added.

Adoption was viewed in positive terms and the pope encouraged Catholics to lobby on the issue: “It is important to insist that legislation help facilitate the adoption process, above all in the case of unwanted children, in order to prevent their abortion or abandonment.”

In the lengthy text, Francis addressed a wide range of topics, from the high cost of weddings to the need to care for the elderly. Although he pushed for traditional values to be maintained in some areas, the pope praised progress such as greater gender equality.

“The equal dignity of men and women makes us rejoice to see old forms of discrimination disappear,” he said, advising husbands to take on domestic chores.

“Masculinity and femininity are not rigid categories,” he said. “It is possible, for example, that a husband’s way of being masculine can be flexibly adapted to the wife’s work schedule.”

Francis was not, however, on board with all developments in modern society, recalling some negative impacts of technology on family life: “We know that sometimes they can keep people apart rather than together, as when at dinnertime everyone is surfing on a mobile phone, or when one spouse falls asleep waiting for the other who spends hours playing with an electronic device.”

At a Vatican press conference following the release of the document, Cardinal Christoph Schonborn of Vienna praised the tone of Francis’ text and the change in discourse.

“No-one must feel condemned, no-one is scorned. In this climate of welcome, the discourse on the Christian vision of marriage and the family becomes an invitation, an encouragement, to the joy of love in which we can believe and which excludes no-one, truly and sincerely no-one,” he said.

Schonborn, a progressive whose parents divorced, said he understood the harm and sense of exclusion the church’s approach has had in the past: “I am personally aware of how difficult that is for those who come from a ‘patchwork’ family, due to the situation of my own family.”

The cardinal went on to celebrate the pope’s “rare clarity” on his writings on passion and the broader celebration of family. “Pope Francis succeeds, in the work of both synods, to offer a positive outlook to families, profoundly rich in hope,” he said.

But the pope’s publication has also attracted criticism. Francis DeBernardo, executive director of New Ways Ministry, a Catholic LGBT group, said DeBernardo said it lacks an affirming message that many in the LGBT community had hoped for.

“Though the pope calls for church leaders and ministers to be less judgmental and to respect individuals’ consciences, he has not provided a new pastoral approach to LGBT issues or people,” he wrote.

His view was echoed by the Human Rights Campaign Foundation, an LGBT educational organization.

“We had hoped that Pope Francis’ more open and loving message about LGBT people would translate into fuller inclusion during the Church’s Year of Mercy,” said Mary Beth Maxwell, the group’s senior vice president for programs, research and training.