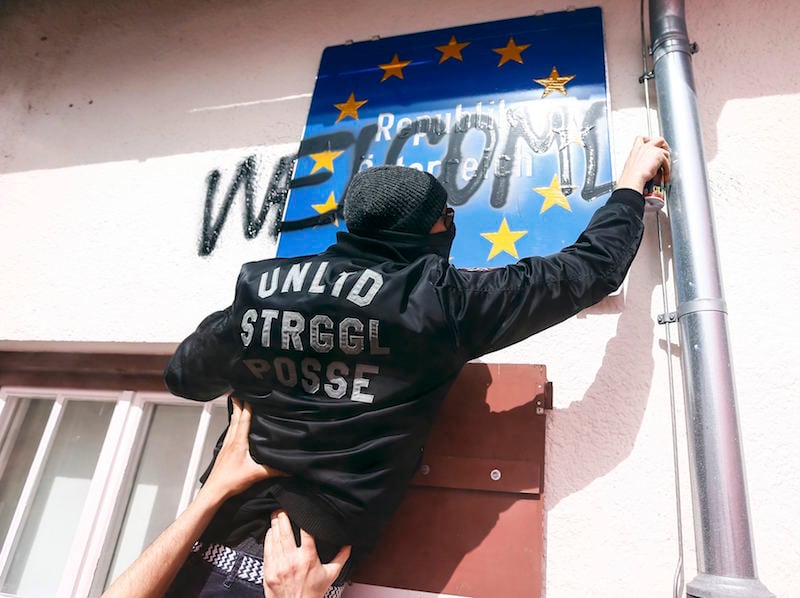 A demonstrator sprays a slogan on a boarder sign during a protest against the closing of european boarders, at the Austrian-Italian boarder in Brenner, REUTERS/Dominic Ebenbichler

VIENNA (Reuters) – Aid groups including Catholic Caritas and the Red Cross, said on Monday (April 11) they will resist plans by the Austrian government to toughen its asylum process, shifting decision-making to centers near its borders.

Draft legislation Austria says is needed to safeguard public order and internal security would make family reunification harder for migrants and would see the bulk of asylum requests being dealt with within an hour of crossing Austria’s border.

“This is probably the most fundamental change in recent decades. A change which means Austria virtually takes leave of the right to asylum,” Michael Landau, head of the Catholic non-governmental organization (NGO) Caritas, told reporters.

Austria’s government has relied heavily on NGOs such as Caritas, the Red Cross and German aid group Diakonie to manage migrant flows and accommodation centers, provide legal assistance and collect and distribute clothes and food to asylum seekers.

The head of Austria’s Red Cross, Werner Kerschbaum, said he had sent a letter to the government to say his group would refuse to help enforce the new measures, should parliament approve them in a vote expected to take place in May.

The heads of all three organizations said the bill breached both European law and the Austrian constitution and would encourage migrants to make use of human traffickers.

“There is no doubt about the illegality of the Austrian bill in question,” said Michael Chalupka of Diakonie.

The groups will appeal to each lawmaker’s conscience in writing to encourage them to vote against the draft tabled by Austria’s centrist coalition government, Chalupka said.

The new plans would go beyond previous restrictions Austria introduced to limit the number of asylum claims it accepts this year to 37,500 – less than half of last year’s 90,000. It has received around 14,000 claims so far in 2016.

The country has mainly served as a conduit into Germany for refugees and migrants from the Middle East and Africa but has absorbed a similar number of asylum seekers relative to its much smaller population.

Austria has also coordinated a series of border closures with nearby Balkan countries over the past few months, which has led to around 50,000 people being stuck in Greece. (Reporting By Shadia Nasralla Editing by Jeremy Gaunt)