Whitman College is no longer the home of the “Fighting Missionaries.” Whitman is dropping the name, which refers to missionaries Marcus and Narcissa Whitman (whose work as missionaries was, at best, complicated). Christianity Today reported that the college is keeping the name Whitman College, but it is letting go of the nickname because it does not reflect the inclusive values of the institution today.

Whitman isn’t the only school to drop a name with religious ties. Elon University students are now the “Phoenix” (singular) and not the “Fighting Christians.” Lincoln Christian University teams are not “Preachers” or “Angels”; they’re the “Red Lions.” Several schools have crossed out Crusaders as a nickname:

There are other schools with obviously religious nicknames (Friars, Saints, and Demon Deacons), but do you know this stories behind these six college nicknames? 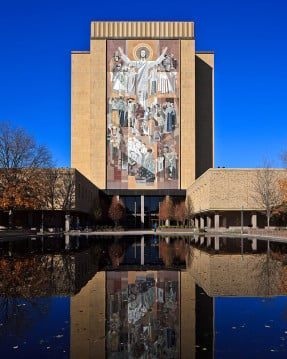 The Word of Life is a large mural on the side of the Theodore Hesburgh Library depicting the resurrected Jesus. The mural, which can be seen from the football stadium, has become popularly known as “Touchdown Jesus”. Source: Wikimedia Commons.

Here’s a question: Is the name “Notre Dame” French or Irish? It’s obviously French. The famous Catholic university Indiana is officially named L’Université de Notre Dame du Lac (University of Our Lady of the Lake). So, why are they called the Fighting Irish and not the Fighting French?

The nickname comes from the use of “Irish” to refer to Catholics (as is still common in England). Calling someone “Irish” was used as a derogatory reference that carried stereotypes of being ignorant and brutish. When Notre Dame began playing football, they sometimes were called the “Catholics” or the “Fighting Catholics,” but sometimes they were called the “Irish.” In the 1920s, the university officially claimed the name for themselves.

A “Jasper” isn’t a ferocious animal. In fact, in a ranking of nicknames, a “Jasper” may be the most benign. The college’s athletic teams are named after Brother Jasper of Mary, FSC, who coached the college’s baseball team in the 1800s. If having a monk as a moniker isn’t gentle enough, Brother Jasper is best known for the seventh inning stretch. For international readers, the seventh inning stretch is a time near the end of the baseball game when drowsy fans watching players stand around stand up for a few minutes before sitting for the rest of the game.

3. Quakers (who fight and hustle)

This is the sports chant claimed by Quaker schools including Earlham, Guilford, Haverford, and Swarthmore. Wimington College is the only remaining school with “Fighting Quakers” as a name. Earlham College was once the home of the “Fighting Quakers,” but it changed names twice. In the 1980s, it changed to the “Hustling Quakers.” A decade later they became just the “Quakers.” Earlham reportedly has another cheer

Catholic universities don’t often have “demons” as their nicknames. But as any alumnus of DePaul knows, they aren’t really named after a demon but the “D-men.” The early uniforms for the DePaul football team featured a blue “D” (the high school associated with the university wore uniforms with a red “D”). So, the squad became known as the Blue-D Men, which morphed into the DePaul Blue Demons. While some leaders at DePaul have considered changing the mascot to something more in line with Catholic symbolism, the reaction from alumni has been a clear desire to keep the school the home of the Blue Demons.

Duke Blue Devils are also not named for the diabolical. The nickname was chosen by the students in reference to a famous French fighting troop that gained fame for its fighting during World War I. It’s not clear if students in the early 1920s chose the name in honor of the “Les Diables Bleus” or if the link to the French was a justification to make a popular name more palatable at the Methodist college. Regardless, the name was adopted in 1923 as the first class of World War I veterans were graduating.

While other schools are holding on to the Crusaders. Valparaiso is a Lutheran institution that arrived at its nickname as a response to war. Up until 1942, Valparaiso was the home of the Uhlans, the name of cavalrymen (in this case, German Uhlans). It was not a time to embrace German soldiers as a nickname; so the administration dropped “Uhlans” in favor of “Crusaders.” The name may not seem like an improvement, but at least the Crusaders holding lances weren’t German, right?

The colors of the University of Illinois and of Wheaton College (Illinois) are the blue and orange. Normally, colors are of little importance. The choice of orange, however, in both cases is a reference to Protestant hero William of Orange. In 1690, William of Orange defeated King James II. The victory did give greater power to the parliament, but it also was a victory for Protestantism. Today, orange is still used to represent Protestantism in sectarian conflicts.

Andrew Draper (Illinois) and Jonathan Blanchard (Wheaton) were each proud descendants of Puritans. And they each wanted to honor Protestantism in their schools’ respective colors. In 1894, university president Andrew Draper recommended the choice of orange. Speaking on the adoption of the school’s colors, Draper said:

Orange has come down to us through 200 years of history.  It was the color under which the world’s first great battle for liberty was fought.

Blanchard chose orange for Wheaton College for the same reason: to honor “that great Dutch patriot.”

Correction: Goshen College was incorrectly listed as being a Quaker college. Goshen in a Mennonite school. Its nickname is the Maple Leafs (Goshen, Indiana is known the Maple City).