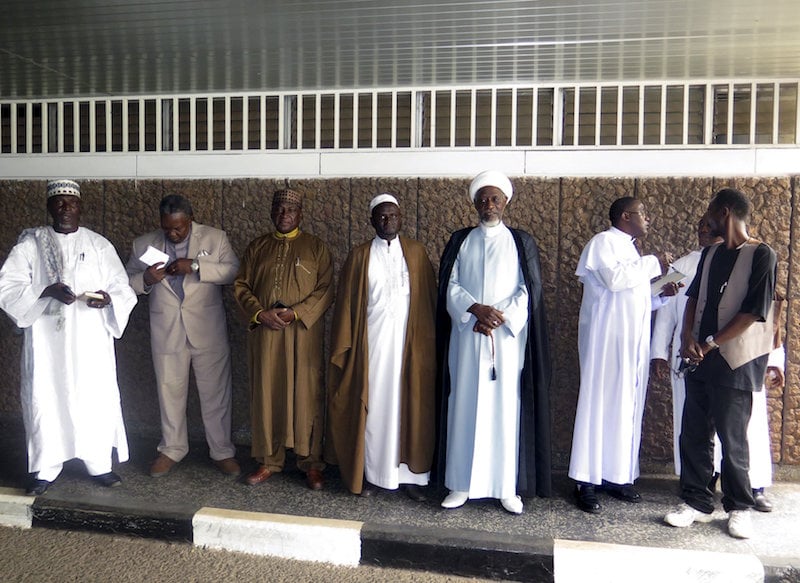 Christian and Muslim religious leaders wait to meet parliament members to oppose a law that would have legalized abortion in Freetown, Sierra Leone, January 27, 2016. REUTERS/Umaru Fofana

FREETOWN (Reuters) – When she was 15, long before she became gender adviser to Sierra Leone’s president, Naasu Fofanah was raped by her church pastor. With her mother’s help, she had an abortion, a decision she does not regret, even though it involved breaking the law.

“That is the choice I want other girls and women to be able to make,” Fofanah said in an interview. She stopped working for the president last year and now heads an organization combating sexual violence, angry that abortion is still illegal.

Since December, parliament, dominated by President Ernest Bai Koroma’s party, has twice passed the “Safe Abortion Bill” which would scrap the current ban, both times with more than the two-thirds majority needed to override a presidential veto.

Koroma has refused to sign it into law, however, saying it runs counter to the right to life enshrined in the constitution and should be put to a referendum.

RELATED STORY: Unsafe abortions on the rise across Africa

His opponents say the move is aimed at currying favor with powerful religious leaders, with some, including opposition politicians, asserting he will seek to stay in power after a constitutional two-term limit runs out next year. His spokesman said the president had made clear he had no such plan.

Almost all of Africa has restrictive abortion laws, and in much of West Africa it is outlawed, often under legislation dating from European rule, although some states allow it in certain circumstances, including if a mother’s life is at risk.

Supporters of repealing Sierra Leone’s colonial-era abortion law say it is largely unenforced in practice. AdvocAid, a legal organization for women and girls, says it has handled just eight cases related to the law in the past eight years.

Instead, the consequences of illegal abortion are primarily health-related. While Fofanah said her mother was able to find a doctor for her abortion, many women have the procedure done by unqualified medics in private homes.

Sierra Leone has one of the world’s highest maternal mortality rates, with healthcare weakened by a lingering two-year Ebola epidemic and the after-effects of a decade-long civil war that ended in 2002.

Some 10 percent of maternal deaths resulted from unsafe abortions, according to a 2013 report by the Ministry of Health and Ipas, an organization that seeks to expand women’s access to reproductive health services.

The new abortion bill aims to reduce this figure by permitting access to an abortion during the first 12 weeks of pregnancy or until week 24 in cases of rape, incest, or health risk to the fetus or the mother.

It has received endorsements from both the African Union and United Nations but has been denounced by religious leaders who regard the life of the fetus as sacrosanct.

“The very title ‘Safe Abortion Bill’ is a contradiction in terms,” Edward Tamba Charles, the Catholic archbishop in Freetown, said. “Whether it is done by a quack or by a professional, there is nothing like safe abortion because somebody’s life is lost.”

Fofanah said some opponents of the law readily cite the right to life but keep silent on the maternal deaths that result from the practice being driven underground. “I also resent the hypocrisy in some of what these people are saying,” she said.

An open letter in January from the Inter Religious Council grouping the country’s Muslim, Christian and traditional religious leaders said the bill ran counter to the constitution.

Koroma agreed and his office sent a memorandum to parliament in February arguing that an impending change to the current civil-war-era constitution, also via a referendum, made it an ideal time to run a referendum on the bill.

But no date has been set for either public vote and his unusual decision to defy his own parliamentary majority prompted speculation in local media that politics may be playing a role.

Religious leaders hold enormous sway in Sierra Leonean society and many people look to them for guidance on political matters and during elections.

“I think it’s more about politics than any moral and religious convictions,” said Ibrahim Tommy, executive director of the Centre for Accountability and Rule of Law – a Freetown-based independent watchdog group. “It’s really about the next elections.”

Opposition politicians say Koroma, who is due to step down at the end of 2018 in line with a constitutional two-term limit, is preparing to follow in the footsteps of other African leaders and stay on longer.

Some of his supporters say he needs more time to carry out work interrupted by the Ebola epidemic, but his spokesman Abdulai Bayraytay denied he was seeking a third term.

“The president’s decision not to sign the bill into law has nothing to do with an extension of his mandate. He has made it abundantly clear that he is not interested in an extension or a third term of office,” Bayraytay told Reuters.

Many women’s rights activists in Sierra Leone say putting the bill to a referendum may take months or never materialize. However, Aisha Fofana Ibrahim, the president of gender-parity organization 50/50, says Sierra Leoneans would back the bill: