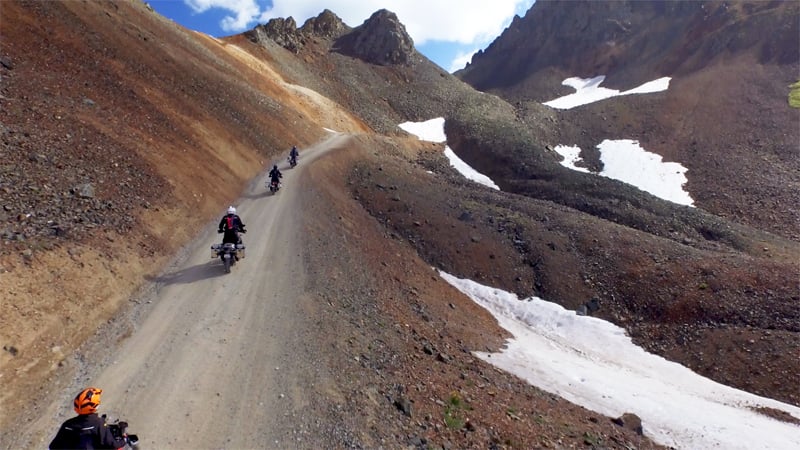 A scene from “A Story Worth Living.” Photo courtesy of A Story Film

(RNS) The idea to attempt a 1,000-mile motorcycle trek through the Colorado mountains came after best-selling Christian author John Eldredge and his three sons watched the 2004 miniseries “Long Way Round,” documenting actors Ewan McGregor and Charley Boorman’s trip around the world on motorcycles.

It was an idea that came up again and again when the Eldredge boys — Sam, Blaine and Luke — on visits home from college, talked about their dreams, the things they hoped to do together someday.

There was only one catch: None of them were bikers.

But, Sam Eldredge said, “Once we had our (motorcycle) licenses, it was just a matter of dreaming.”

Now that dream has become a documentary titled “A Story Worth Living.”

And John Eldredge, counselor and president of Ransomed Heart Ministries, and a writer who seeks to put Christian men in touch with their masculinity, says he hopes the trip he took with his three adult sons, who run And Sons Magazine, and two friends will inspire others the same way they were inspired by McGregor’s and Boorman’s. He hopes their story will get audiences thinking about the stories they are living.

“What we’re hoping the film does is to get people asking questions both about their own story, understanding their own story, but also looking for answers on ‘What is the story my life is meant to be a part of?’” he said. Sam Eldredge in “A Story Worth Living” movie. Photo courtesy of A Story Film

At first, the six riders dreamed of the Australian outback, Sam Eldredge said. Then Patagonia.

Then they realized how many people travel to their own home state on similar journeys, and they realized, he said, “It doesn’t have to be NASA’s next moon landing. This could be something we could pull off.”

They started collecting BMW F800 GS adventure bikes — all used motorcycles, just to prove how attainable the dream could be, according to Eldredge family friend Jon Dale, the only one who made the trek who had been on a long motorcycle trip before. And they started mapping their route.

“We had the criteria of something being fun to ride, beautiful to shoot, and we wanted to filter in these other stories of guys who own ranches who had been longtime friends,” Sam Eldredge said.

Six months and one training school later, the Eldredges set off on the trip with Dale and psychologist Dan Allender.

Along the way, they had a run-in with a bull and a bone-crushing crash. They had long conversations around campfires and poker tables to encourage audiences to have meaningful conversations with their family and friends. They fished and visited friends and shared passages from more of their favorite stories.

They felt like the Blue Angels riding together, Sam Eldredge said. 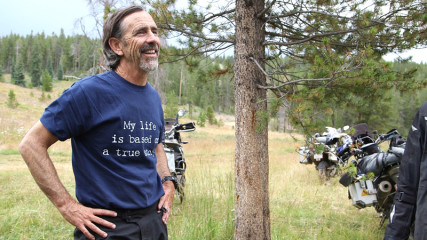 John Eldredge in “A Story Worth Living,” movie. Photo courtesy of A Story Film

But, John Eldredge said, “As I’m reflecting back on the trip, I think the opportunity to do something like this with my sons and with friends, to produce a film of meaning — that’s the highlight.”

“Part of the motive behind the film was adventure films are the No. 1 genre on YouTube … and they have nothing to say. There’s no meaning to the adventure. There’s no content. We wanted to go out and make a beautiful adventure film with rich content.”

They wanted to tell a good story in order to talk about story, to tap into the same longing for story and adventure the author said his book “Wild at Heart: Discovering the Secret of a Man’s Soul” had 15 years ago. The book — with its premise every man dreams of being a hero, being a warrior and living a life of adventure and risk — has sold 4 million copes, he said.

Story is the way we make sense of our lives, he said. And the message of the film is our stories point us to “the larger story of God and the story God is telling in the world” — each a chapter that doesn’t make a lot of sense until you find the story it came from, he said.

“A Story Worth Living” will be shown one night only on May 19 in theaters around the country, followed by a taped interview with Boorman, whose story had helped inspire it.

News
In Oregon, churches and anti-fascists unite to provide mutual aid to fire evacuees and others in need
News
The preaching politician: ‘Good Trouble’ documentary follows John Lewis from fields of Alabama to halls of Congress
Beliefs
Four young people of different faiths move into a home together, then a pandemic happens
News
There’s an app for that: Christian mindfulness, meditation apps find their moment
Opinion
Warning: Your piety might be dangerous to your health
© Copyright 2020, Religion News Service. All rights reserved. Use of and/or registration on any portion of this site constitutes acceptance of our User Agreement and Privacy Policy, Privacy Statement and Cookie Notice. The material on this site may not be reproduced, distributed, transmitted, cached or otherwise used, except with the prior written permission of Religion News Service.