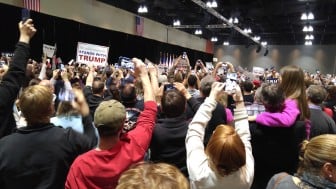 The largely but not exclusively white crowd of six or seven thousand gathered in the unprepossessing exhibition hall was generally good humored, and Trump did little to stir things up. He barely mentioned immigrants, and said nothing about Muslims, blacks, or women. “We have to be inclusive,” he declared. After mentioning that the number of food stamp recipients in Connecticut had increased by 54,000, he cautioned, “It’s not their fault.”

Rather, it was the fault of companies moving their operations to other countries and government officials making bad trade deals. He gave a shout-out to Bernie Sanders for agreeing with him on trade, albeit “basically, he’s a Communist.”

The point was: “The system is rigged.” By Wall Street. “Wall Street owns Hillary Clinton,” said Trump. “I was establishment 12 months ago. Now I am about as anti-establishment as God ever created.”

He called out “Lyin’ Ted Cruz” as a religious hypocrite, which the crowd enjoyed. “He walks into a room with his Bible held high,” Trump said. “And then he lies.”

Minor disruptions occurred every few minutes when a protestor would shout something at the stage and be escorted out of the exhibition hall by campaign officials and safety officers, to the mild jeers and snapshots of the crowd. After half an hour it was over.

The only real ugliness occurred on the way out. Descending to the plaza, we were confronted by a thousand or so demonstrators, mostly middle class white liberals to all appearances, waving banners and placards reading things like “Hate Won’t Make Us Great,” and “Wall Street is the Enemy Not Asian and Latino Immigrants” and “Trump is the Face of Racism.”

This stirred up the Trump supporters, who began shouting back. “All lives matter,” yelled someone. “No more food stamps!” yelled another. “I grew upon it, but I got a job.”

It wasn’t much of a confrontation compared to the rocks-and-tear-gas protests of my youth but it was unpleasant enough, and disturbing to my students.

The left has long lamented how the capitalist powers-that-be have split the working class by using racist fear-mongering to turn white workers against blacks and Latinos. I carry no brief for Donald Trump’s candidacy, but it was hard not to see the anti-Trump protestors as serving the same end.