(RNS) Time magazine came out with its annual “Time 100” list of the most influential people and, no surprise, Pope Francis made the cut.

“He’s electrified the world because he embodies the basic tenets of Catholic social doctrine that also cut across all great faiths,” wrote Vice President Joe Biden, a fellow Catholic, in his brief appreciation.

But what other religion-related leaders are on this year’s list?

Muhammad will wear her hijab as she represents the U.S. in the Summer Olympics in Rio de Janeiro. “The sport let her express her athletic talent, and the uniform allowed her to stay true to her faith,” writes U.S. Rep. Keith Ellison, D-Minn., the first Muslim elected to Congress.

Robinson’s novels — including “Lila” and “Home” — range from the mysterious to the certain, writes fellow novelist Colm Toibin. “In her essays, in which she displays a questioning spirit, she is concerned with belief and tradition,” he says.

Zerai, an Eritrean Catholic priest who gained asylum in Rome, has earned the nickname “Father Moses” after setting up an emergency call center in 2003 to help address the volume of refugees fleeing persecution and war. 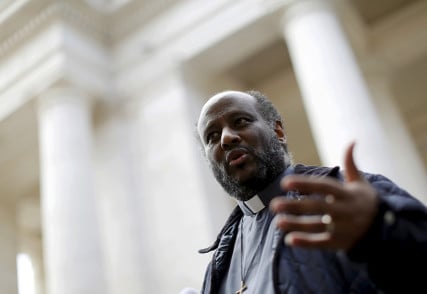 Eritrean priest Mussie Zerai gestures during an interview in front of Saint Peter’s Square at the Vatican on September 30, 2015. Photo courtesy of REUTERS/Alessandro Bianchi *Editors: This photo may only be republished with RNS-ERITREA-PRIEST, originally transmitted on Oct. 13, 2015.

“For over a decade, this Catholic priest has been a lifeline for thousands of Europe-bound boat migrants in distress,” writes artist and activist Ai Weiwei.

Suu Kyi, a former political prisoner in Myanmar, has been hailed for her courage and criticized for not speaking up for the Rohingya Muslim minority group. 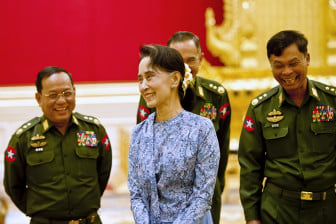 President Obama writes of visiting her home where he saw she “sustained herself by studying Buddhist teachings on love and compassion.”