NEW YORK (RNS) What are you afraid of? That’s what Pulitzer Prize-winning author Marilynne Robinson asks writers who shy away from writing about faith.

The beloved author won the National Book Critics Circle Award on Thursday (March 12) for her novel “Lila,” the final book in her trilogy set in the fictional Gilead, Iowa.

Robinson is known for writing openly about belief, but it remains a subject few other writers take on.

“It’s courageous of Robinson to write about faith at a time when associations with religion are so often negative and violent,” Diane Johnson wrote in her New York Times review of Robinson’s book.

Robinson has been able reach varied audiences. A member of the liberal United Church of Christ, she is far from holding up ideals put forward by the religious right, but that hasn’t stopped conservative Christians from engaging with her writing. Earlier, she spoke with Religion News Service about guns, gay marriage and Calvinism.

Before giving an address at Union Theological Seminary last spring, Robinson also spoke about the tensions between faith and writing. Some answers have been edited for length and clarity. 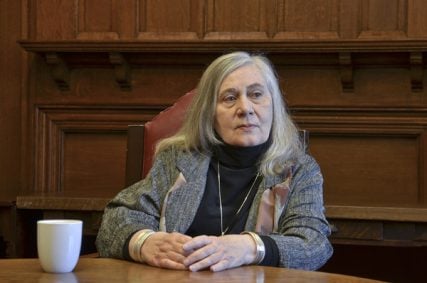 Q: Could you see a character like Ames or Lila existing in 2014?

A: We’re living in a period where people have very little conscious historical memory. They’re not observing their circumstance from the point of view of its origins from preceding periods. There’s a thinness in what you would call “contemporary consciousness” that I’m not interested in.

Marilynne Robinson holds her book “Lila” during a visit to Union Seminary in March 2014. Photo by Kristen Scharold

Q: How involved are you in your church, the Congregational United Church of Christ of Iowa City?

A: I’m less involved than I used to be. When I had a little idle time, I used to teach classes in the church, and so on. I was a deacon; oh, those golden days. But now, I go to church every Sunday I’m in town. It’s very valuable to me, it’s a very meditative experience to me, and full of good thought, but I’m basically a passenger.

Q: You probably go through periods of active or less active involvement in church life, but what role has a local church played in your life over the years?

A: It’s given me the material for at least one novel (laughter). People always think my father was a minister or something like that. No, I just sit in the pew and watch. One of the things that it does is it ponders, at length, a great ancient literature, which is incredibly valuable all by itself. One of the things that attracts many people to church is it gives you the avenue to do something in society that you feel is good, to donate money or time or whatever. And simply because people in the church are socially minded, you get some information that is important about what’s actually going on around you. It’s a village. If you go to a church and stay there over time, you see babies baptized, and children confirmed, the middle-aged becoming the elders, becoming the much lamented. It actually configures your sense of things around the defined arc of human life. I have lived in a college town, which can create the impression that everyone is 22, but in my little village I have a very different sense of people, which I value very much.

Q: Did you experience some kind of Christian conversion?

A: I didn’t grow up anything else. I was more aware of my grandparents’ religion, who were Presbyterian, than my parents’. The becoming-a-Christian thing, I’ve never had any other tropism, shall we say.

Q: Some Christians talk about experiencing God. Do you experience God in some way?

A: I assume that experience is the experience of God. If you think of experience as what is given to you—I mean day to day, the weather of your existence—that, I take it, is intelligible, and has purpose of a certain kind. One of the things I like about John Calvin is that he always talks about people as being presented to us, or even given to us. What he means is that any encounter with another human being is like God posing a question. The answer is what God wants, assuming that God loves and is loyal to the person he has presented to you, which is a very profound ethical question. This might seem over-intellectualized, but to me it’s much more meaningful than Zen or something like that. It opens the world. It’s not a place of refuge, it’s a place where the exhilarations of reality are presented to you, almost at the level of demand.

Q: Does your faith directly impact your writing? For instance, do you access language through prayer ever?

A: I find that my praying turns into thinking. It’s like trying to contain something, and then perhaps it turns into prayer. It’s almost impossible for me to maintain it as a purely distinct activity.

Q: When people read your books, do you hope that they have an encounter with God, or see Jesus more clearly, or that they might have a spiritual experience?

A: At this point, right across the traditions, there is nothing more valuable to be done than to make people understand that religion is beautiful and it is large.

Q: As you write, do you draw on language found in your faith? What are the strengths of religious language, or what are the limitations of language when it comes to talking about faith and belief?

A: Language is limited in its nature. It’s like consciousness itself. It’s defective, and you can push at it. You can make it do things you wouldn’t have known it can do. One of the things that is a benefit to me is that, because I have been interested in a particular theology, it makes a coherent language. It’s internally self-referential, in a way. This could be true of anyone who is deeply acquainted with any tradition. This particular tradition was very verbal, so you have a very rich literature that pushes the articulation of certain basic ideas.

We have anxiety about differences. We are different, anyway, so we might as well calm down about it. But one of the things that we have to do is understand that within the system that is anyone’s difference is incredibly enabling. It means people before me have pondered the response to death. People before me have pondered the reality of time in different dialects. This is beautiful. This is not a thing to be anxious about. For my own Calvinistic purposes, I would like to see the tradition that I speak from re-animated, fleshed out. It’s human, it’s experience. Only religion fully realizes the arc of human life, and so much beautiful thought has gone into this over our eons of time.

Q: An article in The New York Times asked, “Has Fiction Lost Its Faith?” Is it hard to write about faith in fiction?

A: It’s too exhausting and demanding to write; I would never write about anything I didn’t really want to write about. So my imagination goes to where it basically lives. I wrote my book about a man interpreting the Ten Commandments for his son. Under no circumstances was I reproved for having used this kind of language. I don’t know who the Pulitzer committee are, but I assume they’re pretty representative of New York cultural life, and they gave me a prize!

People say to me “I’m religious, I’d like to write about religion but … everybody would hate it, nobody would read it.” You’re a coward, is what you feel like saying. … Faith is one of the great structuring elements in civilization. It has fascinated the best minds of many centuries. If it happens to fascinate yours also, there is no reason to be afraid. Of what, a bad review?

Q: Why is there a dearth of good authors who write about faith?

A: Religion has been associated with narrow denominationalism, where people think if you explore religion in the language that your own tradition makes available to you, that you are making some assertion about the superiority of your tradition over the one next door. But there’s no reason to think that. We simply have different vocabularies that come out of different traditions. Anyone can explore the brilliance of their received vocabulary.