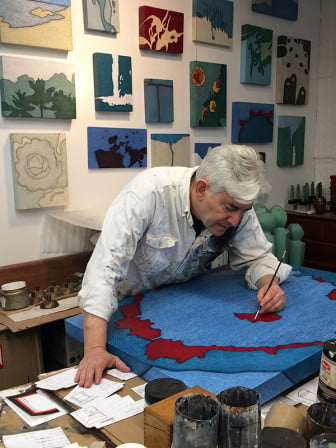 (RNS) As the early-April sunlight streamed through a window in his cheerfully cluttered studio in Queens, New York artist Tobi Kahn bent over a workbench with a number 10 Filbert brush. He was putting the third wash of glaze — out of eight — on a painstakingly worked silver-painted peg, a unique miniature sculpture soon to join 48 others.

Kahn was on deadline. “I want it done before Pesach,” he remarked. On the second evening of Passover, during which Jews recall God’s deliverance of their ancestors from Egypt, the more observant also begin a 49-day countdown to the festival of Shavuot, which marks the time Moses received the Ten Commandments. Most people fulfill the obligation, called Counting the Omer, by simply reciting a blessing each day.

Not Kahn. The 49 meticulously worked pegs fit into an equally beautiful 2-foot high case. Hang the case on your wall and you have a sculpture that evokes the grids and boxes of modernists such as Sol LeWitt and Joseph Cornell, or an abstract rendering of an idiosyncratic small town. Remove a peg daily and you’re counting the Omer. (Some prefer to add a peg a day.) 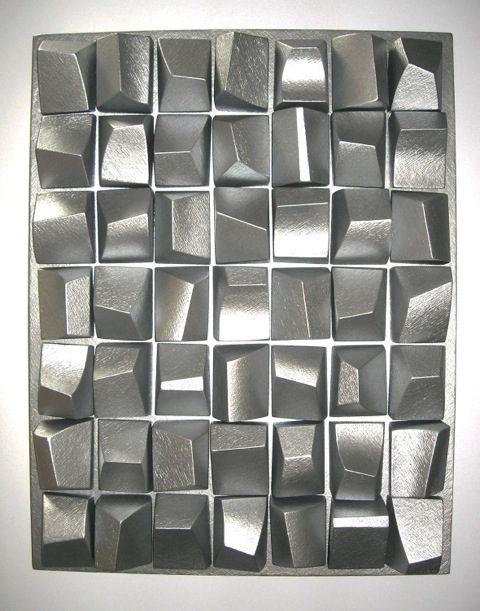 “Saphyr (Omer Counter),” 24 x 18 x 5.5 inches, acrylic on wood, 49 individual sculptures in a larger housing component, 2015. The 49 sculpted forms are set in a grid; each one can be placed in its designated space in only a single way. By a daily act, the viewer becomes a participant in the continually changing work, a celebration that takes place over measured time. Photo courtesy of Tobi Kahn

Kahn’s first Omer counter (he is now creating his third cycle of seven) hangs in New York’s Jewish Museum. His clients sign an agreement saying that they will remove and replace the pegs once a year. But interestingly, not all of them are Jewish.

“All I ask,” he says, “is, ‘Can you understand the idea of devoting 49 days to marking the passage from slavery to freedom?’ You don’t have to be Jewish to understand that.”

“Don’t get me wrong,” he says. “I’m very proud to be Jewish and I want you to know that. But I don’t think Judaism is the only game in town.”

A standard trajectory for talented artists interested in religious themes typically goes like this: early success with secular subjects; a swerve into the art of faith; a challenging career selling solely religious art to a niche market, or pushing against the mainstream art world’s disdain for expressions of faith. If the artist is Jewish, add some anxiety about violating the commandment against graven images.

Again, not Kahn. His Jewish credentials, including the tragic kind, are unassailable. He was born and remains an Orthodox Jew. He is named after an uncle, one of the first Jews murdered by the Nazis.

He attended Yeshivat Har Etzion, outside Jerusalem, and hosts an artists’ “bet Midrash,” or Jewish study group, that he co-founded 15 years ago. The Jewish magazine Moment displayed the Omer counter last year as one of 17 defining works of Jewish art. 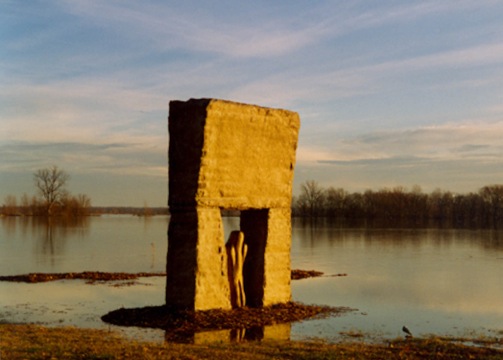 But Kahn also studied with the abstract expressionist George McNeil at the Pratt Institute. The British newspaper The Guardian recently tagged his monumental bronze sculpture “Shalev,” in New Harmony Ind., as one of the 10 best spaces “to inspire contemplation” — during Lent.

A New York Times review of his abstract landscapes called them “ravishingly beautiful” and “ambiguously abstract,” with no mention of faith. Recently he has been focusing on creating interfaith spaces that summon the emotions of faith but not its particulars.

A passion for ceremonial objects

Kahn does not believe that the Second Commandment prohibits art, saying that in his boyhood home he was more influenced by “hiddur mitzvah,” or the act of  “ornamenting the commandment.”

“We had a special tablecloth for Saturday,”  he says. “My mother had special candlesticks; we had special food. It was a visual experience. In my early years I couldn’t distinguish between my vision as an artist and a Jew.”

At first, it seemed the art market might do it for him. Kahn broke through as part of a group show in 1985 at New York’s Guggenheim Museum. Friends from that time recall no explicit religiosity to his exhibition work, associating it instead with Mark Rothko’s abstractions and a group called the New Imagists.

But Kahn was already exploring another mode. He had begun making high-art versions of Jewish ceremonial items — some of which already existed, and others that he thought should.

For his marriage to the writer Nessa Rapoport in 1986, he re-designed the huppa, or wedding canopy, to emphasize permanence. Noticing that the housings for portable Torah scrolls provided to families in mourning tended to be “ugly pine boxes,” he devised a starkly stunning version with Shaker-like lines and a landscape image evoking Sinai. 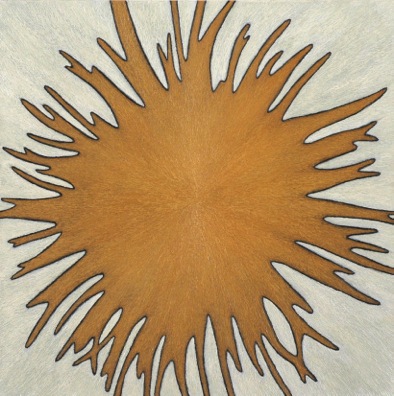 Variations on Jewish charity boxes, baby-naming chairs and Sabbath spice boxes eventually ended up in shows themselves, and people began suggesting new objects. He is currently working on a golden, multiplanar sculpture with which to celebrate Birkat Hachama, a blessing upon God’s creation of the sun, recited every 28 years. (Kahn’s deadline on that one: 4/8/2037). When a grieving friend called and asked, “Did you ever do anything for a miscarriage,” he modeled one on a geode, a rock with compact crystal formations and an empty center.

There was nothing particularly Jewish to it. He has moved into a third arena: works that are distinctly religious, but not of any particular faith. The 13-foot “Shalev,” created in 1993 for a spiritual retreat in New Harmony, Ind., was inspired in part by Stonehenge. Since the death of his mother in 2004, Kahn has increasingly turned his hand to the creation of meditative spaces and meeting places, often populated with his canvases.

These projects use no overtly religious symbols. Instead, Kahn appropriates motifs that attract him: the winding of rivers, fractal geometry, flower blooms. He happily accompanied a reporter to one of his most recent commissions, the Convening and Seminar space at Auburn Theological Seminary, on Manhattan’s Upper West Side.

Kahn’s paintings for this combine his recent fascination with Caribbean vegetation and subtle references to the biblical book of Genesis. Said Katharine Rhodes Henderson, Auburn’s president: “We’re a big tent. We’re bringing together Christians, Muslims, Jews and people who don’t identify with any religious tradition. Because he is grounded as a Jew, Tobi’s work is spiritually powerful. But his art speaks across lines of religious difference.”

And this is how Kahn likes it. “My lens is as a God-fearing person,” he said. “Judaism is the religion I know, but I’m very interested in all the others. Someone once asked (the famous rabbi, theologian and civil rights champion) Abraham Joshua Heschel, ‘Would it be a better world if there was only one religion?’ And he said, ‘Would the person like all the paintings at the Metropolitan Museum to look alike?’”