Churches are increasingly concerned about racial and ethnic diversity. This concern may be the right move theologically but it may come at a cost. New research suggests that congregations that become more diverse are more likely to see a decline in church attendance.

Among religious leaders, advocating for racial reconciliation is no longer controversial. Over  the past two decades, Protestant denominations have moved to repair nearly two centuries of racial segregation. Both the Southern Baptist Convention, the United Church of Christ, and The Episcopal Church have chosen African-American leaders. The United Methodist Church moved into full communion with historically black Methodist churches, such as the African Methodist Episcopal Church. And the National Association of Evangelicals has attempted to frame the definition of “evangelical” so that it is more inclusive.

But what happens when a congregation becomes more diverse? Does that help or hurt the growth of the local church?

Until recently, there have been more hunches than data to answer these questions.

In the 1950s and 60s, the Church Growth Movement pushed churches to change how they operated in order to increase attendance and the number of congregations. While leaders in the movement wanted to reach out to peoples from other cultures (literally around the globe), they did not see racial and ethnic diversity as successful. Churches grow when they were homogenous, they argued.

But is that true? Sociologists Kevin Dougherty (Baylor University), Brandon Martinez (Providence College), and Gerardo Marti (Davidson College) recently published their research on this question in the Journal for the Scientific Study of Religion. They find that diversity may depress church attendance.

Dougherty and his colleagues examined how over 10,000 congregations in the Evangelical Lutheran Church in America (ELCA) changed from 1993 through 2012.

When ELCA formed in 1988, it recognized that was very, very white, and established goals and offices to improve diversity. In 1993, the ELCA adopted a statement on racism that called for its congregations and leaders to repent of the sin of racism. This document called on congregations to seek diversity while acknowledging that this was “neither quick nor easy.”

Dougherty and his colleagues find that since 1993, the diversity in the typical ELCA congregation has doubled but church attendance has declined by 22 percent.

At least some of this decline is due to changes in diversity. After taking into account many other factors, the researchers find that congregations that became more diverse had fewer people attend. Churches that became more homogenous were more likely to grow.

These results come with two interesting caveats (it’s an academic study; so, there had to be a few caveats).

Second, the decline due to racial and ethnic diversity was most acute in the 1990s. One reason may be that the racial climate has become more accepting of diversity. Another is that the homogenous churches are now declining faster as debates over sexuality have added to the declining numbers in ELCA congregations. 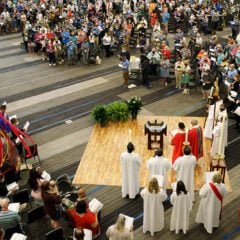