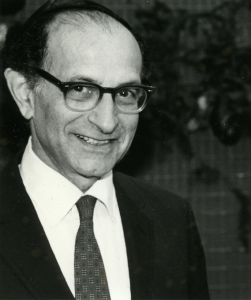 Just before Passover Rabbi Ben-Zion Gold died at the age of 92. The longtime director of Harvard Hillel, he had grown up in a Hasidic community in central Poland and was sometimes referred to as the Harvarder rebbe — a semi-joke that conveyed a truth about the man.

I first got to know him in the spring of my sophomore year when I was given the job of instituting Passover seders in the college’s residential houses. “But it’s going to cost some money,” I informed him. “Don’t worry about that,” he replied, in a way that made me think that God rather than some human donor would provide.

Ben, as he was called by all non-undergraduates, was a survivor of Auschwitz but he never called attention to that — and, appropriately, it was not mentioned at his funeral. As Hillel director he resisted the growing emphasis placed on Holocaust awareness. For him, the important thing was not to remember how the Jews of Europe had died but how they had lived. Towards the end of his life he wrote a moving memoir of his childhood in prewar Poland.

What the Nazis did to his world nevertheless made his spiritual journey difficult. He became a rabbi as if by default, he used to say, because what preoccupied him was Jews and Judaism. In America, where he arrived in 1947, he did not seek a version of the Hasidic shtetl but joined the Conservative movement, an American creation that sought to integrate traditional religious practices with modern life. Early in the 1970s, he startled his congregation on the second day of Rosh Hashanah by announcing that henceforth women would have the same liturgical status as men in our services.

Politically he was a man of the left, Jewishly and otherwise. A staunch Zionist, he was an equally staunch critic of the Israeli treatment of the Palestinians. “Those of us who criticize Israel do so because Israel is an important part of our identity, because criticism is an integral part of our traditional culture,” he said in a 2002 Hillel talk he subsequently published in the Boston Review. His funeral announcement said that remembrances could be made to the International Rescue Commission or the Bernie Sanders campaign.

Ben was a good friend of Isaac Bashevis Singer and, it must be said, he too had an impish side. He did not suffer fools, nor did he refrain from scandalizing the proper or tweaking the pious.

He had a summer place in New Hampshire that my wife and I once visited, bringing him some fresh fish on our way to Maine. In contrast to the kempt world of Cambridge there was something unsettling about the place. The grounds were overgrown with tall grasses and the house was down at the heels. The attic, he made sure to show us, was home to hundreds of bats, which he had no intention of getting rid of. On the musty bookshelves sat a complete set of the Talmud.

It was an uncanny retreat — the kind of place where a dybbuk might lurk, or where a holy man would go to struggle with his demons and, one hopes, come out on top. This Passover I’ve been thinking a lot about Ben-Zion Gold.