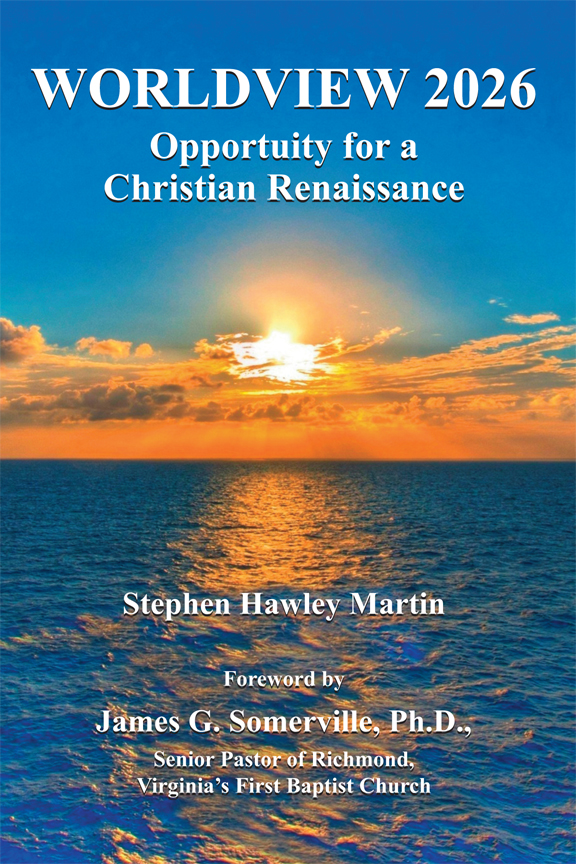 Stephen Hawley Martin, award-winning author and former principal of the marketing firm that created the GEICO Gecko and “Virginia is for Lovers,” has released a new book called WORLDVIEW 2026: Opportunity for a Christian Renaissance.

Martin, who was raised in a household of skeptics but became a Christian after study and contemplation, said, “A new worldview is rapidly emerging, particularly among the young, that I expect to be predominant by 2026. If Christian leaders will accept it and champion how Jesus’ message and the new worldview are in accord, it seems to me the current decline in Church membership not only can be reversed, we may actually see a Christian Renaissance.”

Martin went on to say that few published reports of near death experiences communicate the hell-like phenomena some endure, nor do they make clear the ramifications of a person’s actions are not only clearly seen but also vividly felt during the life review.

“Imagine what those who have been cruel or egocentric must experience,” Martin said. “Those two factors alone are reasons enough to follow Jesus’ commandment to ‘Love one another,’ but there are many more. For example, a theory being put forth by a physicist about the creation of physical reality and human life actually supports Jesus’ teachings. Yet I suspect even the physicist himself does not realize it, which means it’s up to knowledgeable Christians to connect the dots for others.”

The foreword to Martin’s book was written by James G. Somerville, Ph.D., Senior Pastor of Richmond, Virginia’s First Baptist Church, which boasts one of the largest congregations in the mid-Atlantic region.

WORLDVIEW 2026 (ISBN: 1532841043) is now available on Amazon. It is published by The Oaklea Press in trade paperback and is distributed by the independent publishing platform, CreateSpace. Established in 1995, Oaklea Press’ titles range from business management to novels, self-help, spiritual, and motivational.

FOR A REVIEW COPY AND MORE INFORMATION, CLICK HERE.