(Reuters) A California student was embarrassed and distressed after a picture of her wearing an Islamic headscarf, or hijab, appeared in her high school yearbook with the false name “Isis Phillips,” a Muslim advocacy group said on Sunday (May 8).

The senior at Los Osos High School in Rancho Cucamonga and her parents were “embarrassed after seeing the picture in the yearbook and have suffered a great deal of emotional and psychological distress,” according to an emailed statement by the Council on American-Islamic Relations, or CAIR.

The school’s principal has apologized for what she described as a “misprint,” and CAIR said its legal team would meet on Monday with the family and school officials, and seek an investigation of the incident, a spokesman told Reuters.

ISIS is one way to refer to the Islamic State, the militant group that has seized large swaths of Iraq and Syria and claimed responsibility for bombings in Europe. The United Nations defines Islamic State as a terrorist group.

A student who worked on the yearbook said the printing of the wrong name was a mistake and that a student named Isis Phillips had transferred from the school earlier in the year, according to a report in the New York Daily News. 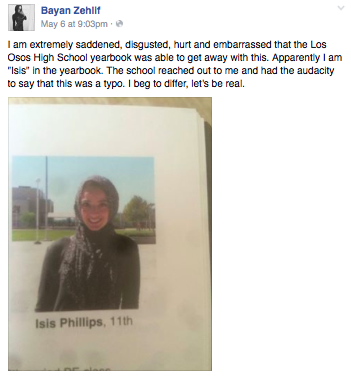 A yearbook page showing a Muslim student wrongly identified as “Isis” has been posted and shared numerous times on social media, including by the student who was pictured, whose name is Bayan Zehlif, according to the New York Daily News. Reuters was not able to independently verify that the page belongs to the Muslim student, or whether that is her real name. Screen grab courtesy of Facebook

The yearbook page has been posted and shared numerous times on social media, including by the student who was pictured, whose name is Bayan Zehlif, according to the New York Daily News.

“I am extremely saddened, disgusted, hurt and embarrassed that the Los Osos High School yearbook was able to get away with this. Apparently I am ‘Isis’ in the yearbook. The school reached out to me and had the audacity to say that this was a typo. I beg to differ, let’s be real,” said the statement on what appears to be Zehlif’s Facebook page.

Reuters was not able to independently verify that the page belongs to the Muslim student, or whether that is her real name.

CAIR declined to provide the name of the student. Officials at the high school could not be reached for comment.

Susan Petrocelli, the high school’s principal, said officials were going to correct what she described as a “misprint.” At least 200 yearbooks have been distributed, CAIR said.

“Los Osos High School is taking every step possible to correct and investigate a regrettable misprint discovered in the yearbook. We sincerely apologize,” Petrocelli said in a statement on Twitter.

News
Taco trucks and voter guides boost political profiles of faith communities at the margins
News
Poll: Muslim American support for Trump rises, but most plan to vote for Biden
News
Normally a refuge on campus, college Muslim groups fight students’ isolation in a pandemic
News
In Oregon, churches and anti-fascists unite to provide mutual aid to fire evacuees and others in need
News
What’s behind the ‘Cuties’ outrage?