Moore punched first. Outspokenly #NeverTrump from the get-go, he ramped it up this weekend with an op-ed in The New York Times and an appearance on “Face the Nation.”

In the Times, he swung at Trump’s followers citing “threats and intimidation from the ‘alt-right’ of white supremacists and nativists who hide behind avatars on social media.”

Trump struck back via social media at dawn Monday (May 9).

.@drmoore Russell Moore is truly a terrible representative of Evangelicals and all of the good they stand for. A nasty guy with no heart!

Moore was on it by breakfast time. First, he posted that Trump’s tweet was “sad.”

And then, for good measure, the theologian called down the lightning, citing a passage from the biblical Book of 1 Kings. 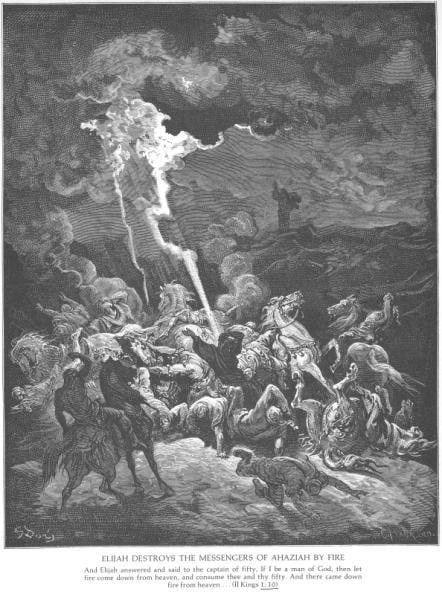 Artist Gustave Dore’s woodcuts of the Bible include the passage in 1 Kings where the Prophet Elijah confronts the priests of Baal.

This passage is a throwdown between the prophet and the pagan:

“When he saw Elijah, he said to him, “Is that you, you troubler of Israel?”

“I have not made trouble for Israel,” Elijah replied. “But you and your father’s family have. You have abandoned the Lord’s commands and have followed the Baals. Now summon the people from all over Israel to meet me on Mount Carmel. And bring the four hundred and fifty prophets of Baal and the four hundred prophets of Asherah, who eat at Jezebel’s table.”

Spoiler alert: It doesn’t end well for the followers of Baal.

Elijah destroys the pagan priests and Jezebel winds up eaten by dogs.