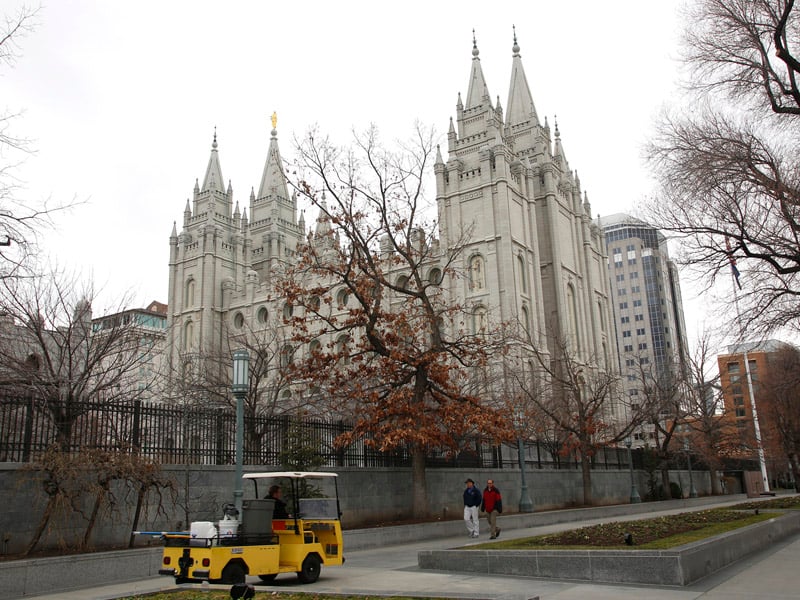 The Church of Jesus Christ of Latter-day Saints' temple is pictured in Salt Lake City on Jan. 27, 2015. Photo courtesy of REUTERS/Jim Urquhart *Editors: This photo may only be republished with RNS-MORMON-RAPE, originally transmitted on May 10, 2016.
May 10, 2016
guest

That Mormon mantra apparently was ringing in a young Brigham Young University student’s mind in 1979 as she leapt from a would-be attacker’s car on the freeway.

Being raped, the student believed, would rob her of “virtue” -- virginity -- a prize she could never regain. Her life would be over, so why not jump?

This message was preached repeatedly by LDS leaders of that era and in a widely read church volume by President Spencer W. Kimball, “The Miracle of Forgiveness.” It was encapsulated in a 1974 LDS First Presidency statement, which asserted that only if a woman resisted an attacker “with all her strength and energy” would she not be “guilty of unchastity.”

It was taught to each new generation through the decades, often presuming rape was somehow consensual sex -- and placing much of the blame on women.

Today, the Church of Jesus Christ of Latter-day Saints takes a healthier approach in its official pronouncements.

Rape victims “often suffer serious trauma and feelings of guilt” and “are not guilty of sin,” Handbook 1 for local lay leaders states. “Church leaders should be sensitive to such victims and give caring attention to help them overcome the destructive effects of abuse.”

But old ideas can be tough to quash.

Mormon women, especially at LDS-owned schools, continue to be bombarded with the notion that they are at least partially responsible for sexual assaults by what they wear or do, or how hard they fight back.

Recently, several Brigham Young University students who reported they were raped were investigated by the school's strict Honor Code Office for other violations leading up to their assault, such as drinking, staying out late or being in guys’ rooms.

Critics such as Michael Austin, a Mormon and BYU graduate who works as provost and vice president of academic affairs at Newman University, a Catholic college in Wichita, Kan., says colleges must reject some long-standing presumptions, including the belief that women are responsible for men’s sexual behavior, that they lie about their experiences to escape accountability or that they would always be safe if they simply obeyed church or school standards.

Some Mormons “came right out and blamed women for breaking rules,” he writes in a post for the LDS blog By Common Consent, “with the clear implication that getting raped is the punishment they deserve because they are, you know, sinners.”

More troubling, Austin says, is that such attitudes echo what young Latter-day Saints learn at church about modesty, sexuality and gender.

“I can trace what my daughter is learning in Young Women” -- the LDS organization for girls ages 12 to 17 -- “and what is playing out at BYU.”

Though Mormon teachings call on both genders to be chaste before marriage, too often LDS men and women hear different messages about sex, says Chicago-based Mormon therapist Jennifer Finlayson-Fife.

Men are told they have a natural sex drive, which is inherent to being male, she says.

“They are the actors in sexual situations, but they are also taught they can’t control it.”

Women, on the other hand, get the idea that they may be sexual beings but don’t have desire the way men do, Finlayson-Fife says. “Femininity is constructed as nonsexual.”

They are the “sober drivers” in these interactions, she says, “more responsible for any sexual interactions by the way they dress, behave and setting limits on when to stop.”

LDS women are expected to be “nice,” “deferential” and “accommodating to men’s needs,” but also are responsible for “fending off men’s advances,” the therapist says. “It’s a double bind.”

And, she says, these dynamics play out again and again in Mormon relationships.

Consider the case of Meagan Leyva, a first-year student at BYU in January 2014 when she began seeing a 25-year-old returned Mormon missionary who attended nearby Utah Valley University and lived in BYU housing.

She felt “violated,” she says, and yet also guilty.

She was breaking Honor Code rules by being in his apartment, especially late at night, Leyva says. “If I hadn’t done that, this wouldn’t have happened. So the blame sort of fell back on me. It felt wrong. I knew (what he did) was wrong, but I knew I was in the wrong, too.”

The Salt Lake Tribune generally does not name sexual-assault victims, but Leyva agreed to be identified.

“It was January and freezing, obviously. ... I was carrying my shirt and my bra with me. I was just wearing a sweatshirt I had worn. ... It was snowing. ... It just felt so ironic because it was so white and so pure, and here I was, not pure anymore.”

Leyva says she didn’t report the assault to police because it wasn’t until months later that she realized what had occurred to her amounted to rape.

Mormons are quick to blame the woman in encounters like Leyva’s, Finlayson-Fife says.

“We want to look away from human cruelty. We want to believe somehow it was deserved or such women had it coming. … We want to think a woman like that had more control than she had. That makes us all feel better.”

The Chicago therapist would like to see Honor Code infractions disconnected from sexual-assault allegations.

“We want victims to come forward,” she says, “and perpetrators removed.”

In addition, Finlayson-Fife is adamant that Mormon views of repentance should have no place in a rape investigation for victims. Not all LDS bishops, however, understand the distinction.

Spencer W. Kimball, beloved by many, published “Miracle of Forgiveness” in 1969.

The loss of chastity is “far-reaching,” Kimball wrote. “Once given or taken or stolen it can never be regained. … It is better to die in defending one’s virtue than to live having lost it without a struggle.”

In 1998, an 18-year-old Mormon convert in New York was raped by her boyfriend.

The woman, who asked that her name not be used, was terrified that her Catholic parents might kill him if she told them. So she went to her LDS bishop, seeking money for a pregnancy test.

The now-36-year-old says she was “disfellowshipped” by the bishop, who had known her since her baptism four years earlier. She was forbidden from taking the sacrament, or Communion, speaking in church, serving in a church position or performing temple rituals.

“I was blindsided,” she says. “I was a Molly Mormon. All I wanted was a beautiful white wedding and kids. The rapist robbed me of all of that.”

The woman, who now lives in Salt Lake City, says she had trouble enough forgiving herself, but Kimball’s book made it worse.

Such a misguided response to sexual assaults is still happening on Mormon campuses and elsewhere.

Austin, the university administrator in Kansas, insists it’s time Mormons reverse their use of shame.

Shame is a powerful cultural tool to use in enforcing norms, he says, “but we’ve made victims feel ashamed and not predators.”

Instead, he says, men need to be “shamed” for objectifying women, for refusing to be accountable and for any coercive actions.

Retired BYU physics professor Kent Harrison, who has been working since 1979 to shift attitudes at his Provo school and in his faith, believes approaches to rape have changed over time.

“My impression is that the old attitude — better dead than a nonvirgin — is mostly gone,” he says. “But the issue of rape is still not talked about much in General Conference or on the church website.”

He would like to see more leaders in the Young Women and all-female adult Relief Society discuss sexual issues openly, especially as they address the Utah-based church’s expanding female membership across the globe.

Even Mormonism’s most famous rape victim, Elizabeth Smart, had internalized feelings of self-loathing when she was routinely assaulted by her captor.

Smart didn’t try to escape as a 14-year-old, she later told national audiences, because she felt like a “chewed-up piece of gum; nobody rechews a piece of gum, you throw it away” — repeating an analogy she had heard growing up.

The poised 28-year-old wife, mother and activist now knows that comparison is flawed — and that someone’s “virtue” cannot be stolen.