PARIS (RNS) Nadia El Bouga is talking about the long-term scars of female genital mutilation — the women she’s treated who cannot enjoy sex, who suffer from medical complications, who may have even forgotten about the painful event that took place when they were as young as 4 or 5.

“As a practicing Muslim, it’s a mutilation that doesn’t exist in the religious texts,” El Bouga says of an ancient tradition that persists among some, mostly African communities, including some Coptic Christians.

“It’s a way to control female sexuality, and it’s a false belief,” she adds, calling on male Muslim leaders to “take a stand.”

Elegant in a pink veil and flowing black pants, El Bouga is at the Paris studio of Beur FM, a French radio station where her weekly talk show on sexuality draws audiences from as far as sub-Saharan Africa.

For some of her listeners, female genital mutilation is a taboo topic, a scourge that affects an estimated 200 million women and girls worldwide, including some 60,000 in France. But no subject seems off limits for 39-year-old El Bouga, France’s rare and perhaps only veiled Muslim sexologist, who mixes medical facts with a dose of religious reality.

If she’s a long way from becoming a household name — or France’s Muslim answer to Dr. Ruth, America’s no-nonsense Jewish sex therapist — the midwife and mother of two is challenging conservative Muslim conventions, not to mention stereotypes about Islam.

“Nadia is exceptional,” says therapist Latifa Bennari, a Muslim and president of the l’Ange Bleu (Blue Angel), an organization that supports victims of sexual abuse. “Other veiled women don’t necessarily have her character, don’t have her courage. Unfortunately, in many Muslim families we’re still confronted with lots of taboos and things left unsaid.”

Mosques and women’s associations are soliciting El Bouga to talk about sexuality. So are a growing number of reporters.

“Nadia is always ahead of the curve,” says Beur FM journalist Philippe Robichon, who invited El Bouga to co-host the weekly show just over a year ago. “She challenges me all the time, pushing me to take on subjects I think are completely improbable.

“Sometimes I worry how listeners will respond,” he adds, “but with Nadia it’s completely natural. She calls things like they are, but she always uses professional terms. That’s why it works.”

El Bouga says she learned about tolerance and the free exchange of ideas from her Moroccan parents, who immigrated to France in the 1970s in search of jobs. Talks with her father, over cups of strong, sweet Moroccan tea, became an after-school ritual.

“He told me how he met my mother; it was a marriage of love, not an arranged marriage,” she says. “He told me about my ancestors, about philosophy. He asked my opinion about world events. I never had a sexual education at home, technically speaking; it was an emotional and spiritual education.”

Like many French teens, El Bouga got her sexual education from school, friends and magazines. Years later, working as a midwife in a northeastern French hospital, she discovered more troubling dimensions of sexuality, confronting problems that were not in her textbooks.

So she went back to university, to specialize in sexology. In 2014, El Bouga opened a private practice in Garges-lès-Gonesse, north of Paris.

Most of her patients are fellow Muslims, who tracked her down by “the Arab telephone,” or word-of-mouth, El Bouga says with a laugh.

“They think I’ll be able to offer them a religious interpretation of their problems,” she adds. “I tell them we share the same religion, but everything depends on how they live their religion and their traditions.”

She turns down men who want to make appointments for their wives: “The women have to take responsibility,” she says. And while most of her clients are indeed women, a surprising number of men turn up at her office.

“People think a Muslim man would have a hard time talking about sexuality to a female therapist,” she says, “but in fact, many prefer a woman, because they don’t feel they’ll be judged on their lack of masculinity or impotence.”

No topic is off-limits, she says, including homosexuality, considered a sin among practicing Muslims.

“I tell them I’m not there to judge them, to tell them what is authorized (under Islam) or not,” El Bouga says. “The idea is to relieve their suffering. It’s up to the patient to decide whether to make his or her coming out.”

She uses Islamic texts sparingly, where it’s “useful,” she says — to counter, for example, assumptions that female genital mutilation is authorized under Islam.

El Bouga’s own relationship with Islam evolved while she was growing up, in a family that was not terribly religious. “They did Ramadan and daily prayers,” she says, “but that was all.”

In her late teens, she began reading the works of 11th-century Sunni theologian and philosopher Al-Ghazali.  At 22, she adopted the veil.

“My father was opposed at the beginning,” she says. “He didn’t understand and he was worried I’d have problems with my studies.”

The real problems came a decade later, while she was specializing in sexology at Paris XIII University, outside the capital. She was the only veiled woman in her class, and one professor categorically refused to teach her.

“She said it was either her or me,” El Bouga says. “She was only saying aloud what others were thinking.”

While France bars girls from wearing headscarves in public schools, the ban does not carry over to universities.

Some Muslims are affronted by her frank take on sexuality, although so far, El Bouga says, she’s had no direct criticism from Muslim leaders.

“I’ve had negative reactions on my website and Facebook page, but not many,” she adds. “Some men think sexology is some form of prostitution, and suggest I must be depraved.”

Others believe she is bridging divides in a country where the veil has become a political lightning rod.

“I’m trying to change mentalities among North African French, but also prejudices that remain among my French colleagues,” El Bouga says, recalling the questions that dogged her in university.

“Colleagues would ask me if there’s something they missed, and I would say, ‘You missed nothing,’” she adds. “You can be a sexologist and a practicing Muslim. It’s not contradictory.” 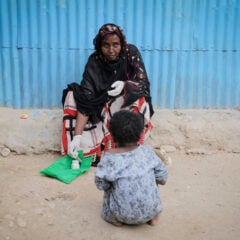 News
In Somaliland, COVID brings ‘cutters’ door to door for girls
Follow us on Facebook!
Submit your photos to RNS