(RNS) I’m a great fan of David Dark. If you’ve never read “The Sacredness of Questioning Everything” or his other books, you’re missing out.

A bit about Dark: He’s a professor at Belmont University in Nashville. He’s got three kids, he’s married to a songwriter, and he reads about as voraciously as anybody I know. He and I were born on the same day. I count myself lucky to have him as a coeval.

Now he’s got a brand-new book out with InterVarsity Press, “Life’s Too Short to Pretend You’re Not Religious.”

If you’re wondering what the heck this all has to do with Mormonism, well, read on. I hear regularly from readers who are in the trenches of the Mormon culture wars — from young adults who’ve had enough of the church’s conservative politics and are throwing out the baby with the bathwater in their frustration, and from the parents (and bishops) who want to know how to entice them to stay.

But this phenomenon is hardly unique to Mormonism, and David’s broader perspective on the role of religion and its ongoing vitality — even in what appears to be a secularizing world – reminds us that religion, in the end, is “who and what we’re bound to.”

A: Mostly out of frustration over the way the word “religion” appears in the news cycle. I believe religion is a catastrophically unexamined word in our time. I was also motivated by sadness over the way folks regard so many of the rich communal resources — the poetry, the ethical heft — of all of the culture that falls under the umbrella of religion as somehow not relevant or to the side of their lives. This strikes me as a widespread, systemic cultural loss.

I’m also bothered whenever anyone uses the word “religious” as an adjective that applies to others but not themselves. This strikes me as a dodge and an evasion of our own bodies, our own context, and all the ways we deploy our energies in a given day.

Q: I hear a great deal from people who are sick to death of religion — of Mormonism in particular — and feeling judged. How would you respond?

A: I certainly understand and I have myself experienced the kind of religion that is a nightmare from which I hope to awaken and somehow recover. But to insist that that is the whole of religion, rather than noting that what I experienced was bad or dysfunctional religion, is to refuse the more nuanced and complex picture of my own life.

Q: What kind of nightmare? A: In my own lonely reading of the Bible, and in my own trust in what particular people told me the Bible says, I was given some very bad ideas about what human beings are for and what nature is for and what God wants from people.

I was given the impression that the earth, to borrow a phrase from Robert Capon, was a disposable ladder to heaven. And that my enjoyment of food, the beauty of bodies, and my love of Star Wars, for instance, were all lesser things, lesser affections, that would all be burned away. And God, in this sense, was so spiritual that God in no way dwelt among the things of the earth.

Q: What would be an example?

A: In my tradition growing up, there was a lurking suspicion that if you missed Communion, what we called the Lord’s Supper, even one Sunday following your baptism, this might constitute a cosmic dealbreaker. I was baptized at 16. So when I was 17 I was working in a movie theater on a Sunday, and I felt a little guilty about that, but I wasn’t in an emotional crisis until I realized that it was a quarter to midnight and I was up against a deadline: I had not taken Communion.

So I asked someone to mind the concession stand as the folks who had been the 9:00 film were starting to come out, and I ran as fast as I could to a nearby grocery that was still open. I ran up and down the aisles looking for crackers and grape juice, purchased these items with the appearance of calm, and then stumbled into the parking lot and tried to assume the right frame of mind as I prayed and ate my crackers and drank my grape juice.

Largely by way of the very tradition to which I was trying to be faithful, I view that young person with good humor and compassion. And today, at 46, I hope that if I live to be 80, I will have similar pity on my 46-year-old self, who is doubtless possessed by strange ideas about the world and God from which I’m yet to be saved and disabused.

Q: What would you say to a burned-out 28-year-old who was raised in a conservative religion and now has no use for it?

A: Don’t blame Jesus or the Jewish prophets or the whole of any sacred tradition for the bad and limited reading of that tradition which hurt you. And note that in that busy little book club of people who read the Bible, there are those who advocate and champion the very politics — a politics of righteousness — that you perhaps found absent in your upbringing. 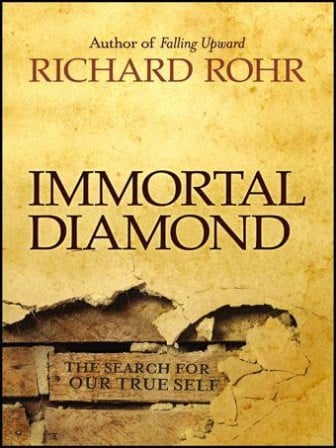 One of David Dark’s reading recommendations: anything by Richard Rohr, but especially this one.

Q: Who should they read?

A: Two words: Richard. Rohr. Rohr plumbs more than one sacred tradition, and shows us, without abandoning the specificity of those traditions, that they are gifts of global, personal, political insight and intuition. There’s one called “Immortal Diamond.”

And Jeanette Winterson’s “Why Be Happy When You Could Be Normal?” Winterson chronicles her own suffering, her own experience and physical and psychological abuse under a woefully dysfunctional and also imaginative reading of the Bible while also noting that as someone who was raised on the Bible, when you’re raised on the Bible, you don’t back down for anyone.

If I read her correctly, Winterson’s own survival, her own strength, her own thriving, comes from her deep soul grappling with Shakespeare, the Bible and any book she could get her hands on. And while she would not wish on anyone her own religious background, she has learned to consider people violently possessed by bad ideas with deep compassion and empathy.

It’s not being marketed as a “spiritual memoir” because it’s secular, but it’s just as good as it gets.

Are Mormons in their 20s and 30s leaving the LDS Church?

Flunking Sainthood
We owe it to the vulnerable to get vaccinated
Follow us on Facebook!
Submit your photos to RNS