PORTLAND, Ore. (RNS) In an effort to stave off a schism in one of the nation’s largest Protestant denominations, United Methodist Church leaders are recommending a deferral of decisions on whether to accept LGBT clergy and allow same-sex marriage.

Bishop Bruce Ough, president of its Council of Bishops, said the church is considering convening a special session of its General Conference in 2018 or 2019 to discuss LGBT issues, which have roiled the worldwide denomination for years.

He made the announcement Wednesday (May 18), more than midway through this year’s quadrennial meeting. Bishop Bruce R. Ough reads a statement about sexuality and the church from the denomination’s Council of Bishops on May 18, 2016, at the 2016 United Methodist General Conference in Portland, Ore. Photo by Paul Jeffrey, courtesy of UMNS

“We recommend the General Conference defer all votes regarding human sexuality and refer this entire subject to a special commission named by the Council of Bishops,” he said.

The recommendation came as the General Conference was set to discuss legislation regarding human sexuality later Wednesday, amid growing tension and demonstrations over the church’s positions on the inclusion of its LGBT members.

The Rev. Katie Z. Dawson of Iowa said she was torn between the people insisting “it’s time” for inclusion, and the many in her subcommittee on Faith and Order who want to hold off.

“It’s life and death, and yet we’re not ready, and I’m just caught in that tension,” she said.

More than 160 demonstrators had greeted delegates with a silent protest lining the sidewalk outside the Oregon Convention Center. Some held signs saying “It’s Time” and “Why exclude us?” and “Self-avowed practicing queer clergy”; others, wooden crosses draped in stoles representing LGBT people in ministry.

On Tuesday, the sound of demonstrators singing the hymn “Blest Be the Tie That Binds,” their hands tied together with the colorful stoles LGBT supporters have worn throughout the conference, nearly drowned out a motion by the Rev. Mark Holland asking bishops for direction on how to move forward on the issue of human sexuality. 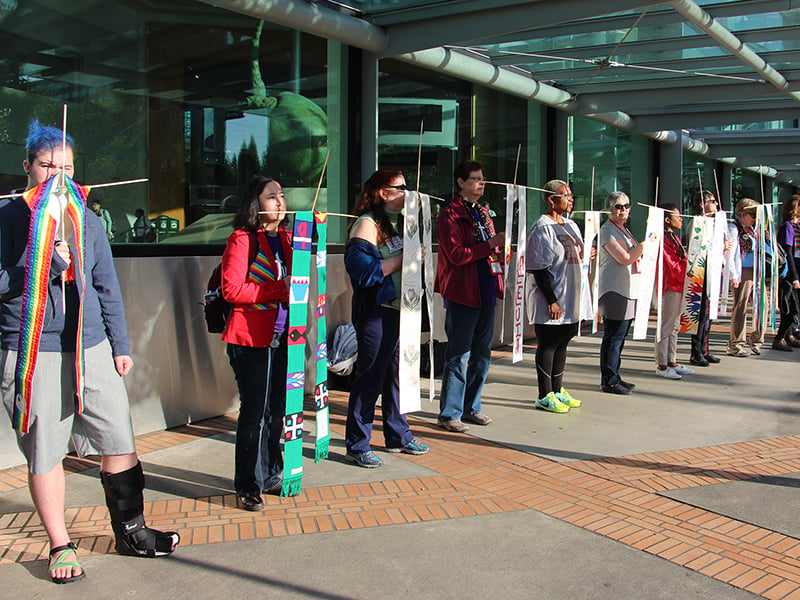 More than 160 demonstrators greeted delegates with a silent protest for LGBT inclusion in the United Methodist Church as they arrived on May 18, 2016, at the Oregon Convention Center for the United Methodist General Conference. Some held crosses draped in stoles from the Shower of Stoles project, each representing the life of an LGBT person in ministry. RNS photo by Emily McFarlan Miller

Ough had addressed delegates earlier in the day, demurring on rumors bishops would call for a special session of the General Conference in two years to consider a reorganization or breakup of the denomination over the issue.

The church has some 12 million members worldwide, including more than 7 million in the U.S., and is experiencing its greatest growth in countries, particularly in Africa, that are theologically conservative on LGBT issues.

“I think now more than ever we need the leader of our spiritual and temporal leaders to move into holy conferencing and model for this body how a divided body moves forward for the good,” Holland said.

The Rev. Jerry Kulah of Liberia opposed the motion, saying, “I would like for us to follow the rules and not compromise the integrity of the General Conference.”

The motion asking for the bishops’ direction had passed 428-364. Many of the bishops were notably absent from the last plenary session of the day, and Ough noted the resulting statement was not unanimously endorsed by the Council of Bishops and is not binding.