(RNS) Some religious conservatives are circling the culture war wagons and calling on prayer warriors to petition heaven for relief from federal overreach in response to the government’s directive concerning bathroom accommodations for transgender students. 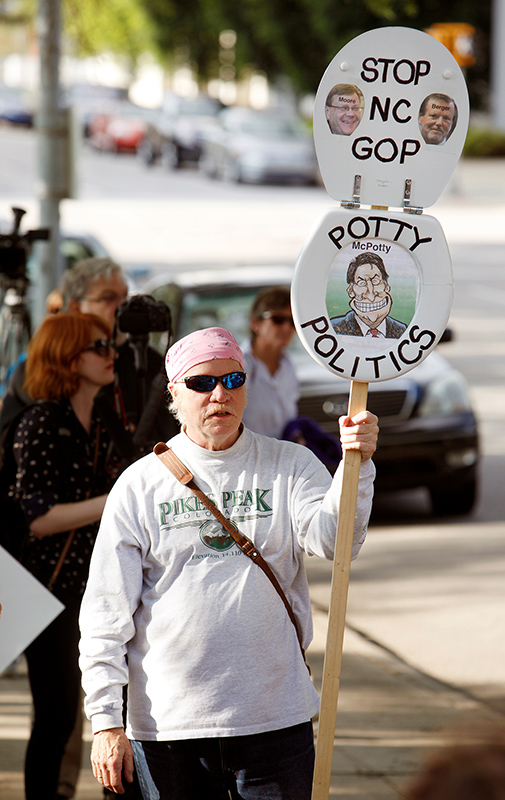 A protester takes part in a demonstration outside the state Legislature in Raleigh, N.C., on May 16, 2016. He carries a toilet seat mocking Republican politicians who approved the state’s so-called bathroom law. Photo courtesy of REUTERS/Jonathan Drake *Editors: This photo may only be republished with RNS-HARTGROVE-OPED, originally transmitted on May 18, 2016.

Russell Moore, who has worked to distance himself from the racist inheritance of our shared Southern Baptist heritage, is one. He did not hesitate to join James Dobson, Franklin Graham and others in crying foul:

“The state here wishes to use its coercive power not simply to stop mistreatment of people,” Moore declared, “but to rescript the most basic human intuitions about humanity as male and female.”

If this sounds like more of the same from the old religious right, it is. Brother Moore has sworn off the divide-and-conquer tactic of race-baiting only to bite the Southern Strategy’s most recent ploy.

I do not write to condemn my brother, but to share what I’ve learned by submitting to black leadership in my home state of North Carolina. There is a better way forward. Unlearning our past isn’t easy, but it’s essential if we are to love our neighbors as we love ourselves.

As Moore and company have framed the “bathroom issue,” Gov. Pat McCrory’s defiance of the U.S. Justice Department over the bathroom law is nothing like George Wallace’s segregationist resistance half a century ago.

Back then, black people were “mistreated” when they were barred from white-only public restrooms. Today, the federal government and the liberal media are trying to “rescript” anthropology by insisting that transgender people are mistreated if they are banned from the restrooms they have been using without incident.

It would be easy to buy this line of reasoning. As a straight white man, I’ve only benefited from structural racism. As a Baptist preacher, I’ve not gotten to know many transgender people. (Wisely, it seems, they’ve stayed away from most of our churches.) I have no personal insight that would cause me to question Moore’s reasoning. But I learned 20 years ago that I was born a racist, and as part of my repentance, I came under the spiritual tutelage of the Rev. William Barber II.

Barber, who now leads North Carolina’s NAACP, has been clear since House Bill 2 passed in March that this discriminatory legislation is not really about bathrooms. It’s about politicians using fear to hold on to power.

Evidence for his point is in the bill itself. Proponents of the law have downplayed the fact that it also denies local governments the power to raise the minimum wage in their communities and takes away every citizen’s right to sue in state court for employment discrimination of any kind. Even on paper, HB2 is a blatant grab for power.

But Barber has also been clear that it’s a cynical attempt at dirty politics ahead of the 2016 election. Four years ago, McCrory and his administration came to power by leveraging the vote of so-called social conservatives through a proposed constitutional amendment that put heterosexual marriage on the ballot. The Rev. Billy Graham was persuaded from his sickbed to endorse the ban on gay marriage, and Christians and others who believed their “family values” were under attack came out to vote for Republicans.

McCrory and the Republican majority in our Statehouse, like so many in state governments throughout the South and Midwest, used their political power to attack public education, decry so-called entitlement programs, deny Medicaid expansion and suppress voting rights.

Absent any record to run on, many in Southern state governments believe the only way they can win re-election is to focus attention on an enemy. Transgender people, it seems, are the scapegoat of 2016.

No, transgender discrimination is not racial discrimination. But for the purpose of power politics, this is a distinction without a difference. In the 19th century, after African-Americans had won the franchise, the key political question was how ruling elites could mitigate their political power. It did not matter that stories of “Negro rule” leading black men to rape white women were not true. They were an effective way to scare the white majority into voting for Southern Democrats and letting the KKK wage its intimidation campaign without resistance.

Likewise, after the Voting Rights Act was passed, Republican operatives developed the Southern Strategy to play on the fears of white Southern Democrats to keep them from voting with African-Americans.

Then, as now, it wasn’t really about bathrooms. The “white only” signs could come down, but white men crossed the Rubicon and joined the party of Lincoln. They held on to power by demonizing urban violence, welfare queens and the “loose morals” of the counterculture that had supported civil rights.

The single most important political reality in America today is the emergence of white people as one among many minorities. Once again, we as a people face the basic question of our democratic experiment: Do we really believe in a government by, of and for all people?

Many who’ve sworn to uphold our Constitution are frightened by the prospect. They are doing the only thing they know to do: They are appealing to the fears of the religious community in a desperate attempt to hold on to power. We would do well to tell them what every angel in Scripture says upon descending from God’s heaven to the messy realm of human politics: “Fear not.”

(Jonathan Wilson-Hartgrove lives in Durham, N.C., where he founded the Rutba House, a house of hospitality. He is the author, with the Rev. William J. Barber II, of “The Third Reconstruction.”)