PORTLAND, Ore. (RNS) The Rev. Jerry Kulah has nothing but gratitude for American Methodists.

In 1833, they sent their first missionary to his country, Liberia, which was founded for freed American slaves. Melville B. Cox died four months after he arrived in Africa, but the missionary’s legacy lives on in the United Methodist Church’s fastest-growing region, and in his words to his own church back in North Carolina: “Let a thousand fall before Africa be given up.”

“However,” said Kulah, who is dean of the Gbarnga School of Theology in the capital, Monrovia, “the church has taken on strangely a new direction. People from the country that brought the Gospel to us are now preaching a different Gospel.”

The United Methodist Church — which on Friday (May 20) was wrapping up its quadrennial General Conference — is struggling to maintain the increasingly tenuous bonds that hold together this global denomination of more than 12 million members.

And among the forces tearing at those bonds during 11 days of meetings at the Oregon Convention Center in Portland, Ore., were arguments over the ordination of LGBT United Methodists and whether to allow clergy to perform same-sex marriages — which are now legal in America and accepted by a growing share of its citizens.

“It’s mind-boggling, and it baffles the Christian leader from Africa — I speak for all of Africa — it baffles the mind of the Christian leader from Africa, who ascribes to the whole Bible as his or her primary authority for faith and practice, to see and to hear that cultural Christianity can take the place of the Bible. United Methodists in America and other parts of the world are far going away from Scripture and giving in to cultural Christianity,” Kulah said.

Despite this sense of outrage, the African delegations largely maintained a calm, restrained presence amid the vocal demonstrations and arguments over procedure at the conference. But many stood up and sang during the recess in the middle of the most contentious day, as delegates considered whether to defer decisions on LGBT inclusion to a specially created commission. Their singing, asking God for help, brought a joyous moment in the middle of strife.

“I think the Americans have something to learn from us,” said Betty Katiyo, a delegate from the West Zimbabwe Conference.

She reflected the belief among many delegates from growing African conferences that their churches retain something of the spirit of Methodism’s founder John Wesley that they can share with the rest of the denomination.

The United Methodist Church in Africa has grown dramatically over the past 10 years — jumping 329 percent in the Africa Central Conference, 201 percent in Congo and 154 percent in West Africa — as membership has dipped in the United States and Europe.

Even with an 11 percent decline in membership, the U.S. branch still is the largest, boasting more than 7 million members. But Africa is not far behind with nearly 4.9 million – including the single largest delegation at the General Conference: 48 delegates from the North Katanga Conference in Congo.

And this year, after a change in the way delegates are allocated, Africa has a noticeably larger share of delegates: 260 out of 864 delegates, compared with 252 out of 956 delegates four years ago.

“This time around … you actually see the worldwide nature of the church in terms of delegates,” said Katiyo, attending her fourth General Conference.

And the Rev. Mande Muyombo, executive director of the General Board of Global Ministries’ Global Mission Connections and delegate from North Katanga, said: “It is also fair to say that Africa — in the past general conferences, African delegates were not as prepared as they’re becoming now. I think African delegates are more empowered, they’re more prepared, they’re more acquainted with Robert’s Rules of Order.” 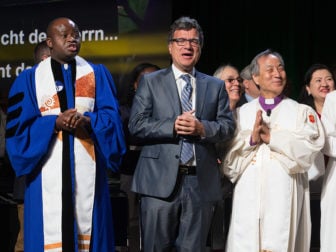 Still, delegates from African countries expressed concerns that their members were underrepresented in the denomination and that the legislation discussed throughout its General Conference was too focused on issues that only pertain to America.

Some warned that a move on ordaining LGBT clergy or allowing clergy to perform same-sex marriages would split the church. Issues regarding the full inclusion of the denomination’s LGBT members have surfaced at every conference since 1972 and came to a head earlier in the week when delegates accepted bishops’ recommendations to defer any decisions to a commission and possible special session of the General Conference.

Aside from theological disagreement, Katiyo pointed out that homosexuality is not culturally accepted and is even illegal in some African countries. If the United Methodist Church affirmed the inclusion of its LGBT members, she said, it would be banned in her country of Zimbabwe.

African churches haven’t placed the same priority on the issue as the U.S. has, Mande said, though he pointed out that Africa is a huge continent, and one African country may not think the same as another.

“I also believe that African voices are diverse and the African notion of ubuntu (‘you are because I am’) is inclusive,” Mande said.

Examples of conference legislation that was too focused on the U.S., Katiyo said, included a measure advocating health care for all in the U.S. and a proposal to allocate $20 million to a new committee on U.S. church growth. The latter was later ruled unconstitutional by the Judicial Council.

When it comes to growth, she said, the American church could learn from Africa, despite the different dynamics in the country.

For one thing, the delegate said, her church of 1,500 emphasizes the Wesleyan idea of “class meetings,” small groups that gather every other week in members’ homes to pray and act as family. The church is a “nucleus” of the community, she said, hosting events throughout the week, and the congregation sets the day aside for worship after Sunday school “rather than a one-and-a-half-hour thing every week.”

The church in North Katanga also offers a holistic, Wesleyan approach to evangelism, according to Muyombo: building schools, hospitals, wells and farming projects around churches and making them relevant to their context.

And the denomination’s churches are sending missionaries “from everywhere to everywhere,” said Thomas Kemper, general secretary for Global Ministries.

But, Kemper said: “We need to find a relevant way for the Western culture as they seem to find a way for African or Filipino or whatever culture. It’s not that easy.”

That’s not to say churches in Africa are without challenges, Muyombo said.

The priorities instead for African churches are on such things as planting churches, ending conflicts and eradicating poverty, he said.

And while there’s no doubt the United Methodist Church in Africa is growing, it is not growing as fast as some other denominations, Kemper said. The structure of the churches in Africa also still is dependent on financial support from U.S. churches, he said.

Kulah agreed the African church needs to work toward becoming more self-sufficient because, as the bishops appoint a commission to discuss LGBT inclusion, he said, “what I see the church going to if we cannot reach a compromise — the end result would be schism, unfortunately.'”

Earlier in the week, delegates had approved a comprehensive plan for Africa that would add five bishops after the 2020 General Conference in Minneapolis, narrowly voting down a push to immediately add two bishops in Nigeria and in Zimbabwe.

“I think the word for me is ‘interdependent,’” Kemper said. “We continue to depend on each other, but we also have the ability to walk in our own shoes and our own way of being the church and not depending on financial support from one part of the church even to keep the structure.”

The General Conference is scheduled for the first time outside the U.S. in 2024 in Manila, Philippines, followed by 2028 in Harare, Zimbabwe.

Meantime, Katiyo said, “I wish either they come or they ask us to come … be missionaries to America. … I’m sure if that happens there will be change.”