Ole Sapit, 52, who headed Kericho Diocese in western Kenya, will replace outgoing Archbishop Eliud Wabukala and also serve as bishop of All Saints Cathedral, the national seat of the Anglican Church.

Ole Sapit said a priority would be playing a role in restoring stability in his multiethnic country with its recent history of election violence and intertribal conflict, as well as terrorist attacks by the Somali al-Shabab militant group.

“The church has spoken and this is the voice of God,” he said. “The first task is to unite ourselves, so that we can unite the country.”

Ole Sapit comes from the Maasai, a seminomadic people who worship their own deity though a number have adopted Christianity.

The archbishop-elect is expected to follow in the footsteps of Wabukala, a conservative and leading advocate for spiritual and doctrinal integrity in the worldwide Anglican Communion. 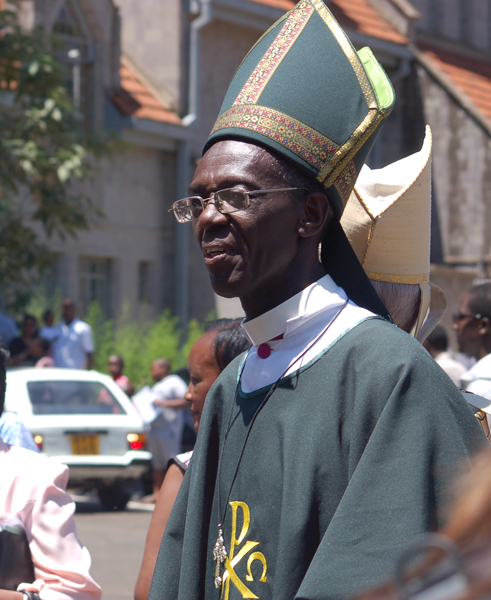 Archbishop Eliud Wabukala, the primate of Kenya who is the chairman of GAFCON. Religion News Service by Fredrick Nzwili

Wabukala chaired the Global Anglican Future Conference, a 2008 gathering in Jerusalem of conservative Anglican leaders who supported the creation of a breakaway Anglican church in the U.S. because of the Episcopal Church’s stance on homosexuality.

Throughout his tenure, Wabukala has been strongly opposed to same-sex unions and the ordination of gays as clerics. Although Ole Sapit avoided the subject, he said the church will continue to preach the gospel under the authority of the Scriptures.

Ole Sapit has also been involved in efforts at sustainable development and conflict resolution in Kenya.

“I think he can unite the people of Kenya,” said Bishop Joseph Kagunda of Mount Kenya West, noting that Ole Sapit brokered a truce during the 2007-2008 wave of post-election violence.

He will be installed on July 3, a week after Wabukala’s official retirement on June 26.