(RNS) The steps of the Lincoln Memorial have seen civil rights demonstrations for decades, notably the 1963 March on Washington, in which African-Americans demanded civil and economic rights, but also in the 1990s as LGBT groups demanded an end to discrimination.

On Saturday (June 4), another group will gather at those same steps. Atheists, agnostics, humanists and other so-called religious nones are converging for the Reason Rally, which according to its website aims to be “the biggest gathering of nonreligious people in history.”

The Lincoln Memorial was festooned with banners on Aug. 28, 2013, for the “Let Freedom Ring” event marking the 50th anniversary of the March on Washington. RNS photo by Adelle M. Banks

The rally’s main goal is to show that nonbelievers have the numbers, the clout and the organizational skills to be a voting bloc worth courting in the November election.

“We have this community that has the power to move mountains and we just need that critical moment where we can focus the conversation on what our community believes in and can do,” said Kelly Damerow, an atheist activist and the event’s president. “That’s what I see the Reason Rally as doing.”

But the hurdles are formidable. Atheists, humanists and other nonbelievers are generally not joiners. And this election year poses an unusual challenge for secularists — there is no major party candidate who has assumed a religious mantle.

So, how to rally the unfaithful when there is no overtly Christian, Catholic or Mormon “bad guy” to oppose?

“In the past we have sort of been able to play on easy mode,” said Lyz Liddell, head of the Reason Rally’s coalition of sponsors, which includes American Atheists, Secular Coalition for America, Openly Secular and the Freethought Equality Fund Political Action Committee, among others. “We’ve been able to say, ‘Look out, here comes Ted Cruz,  the religious right boogeyman.’ It is going to be a test of whether we can exist not solely in opposition to organized religion.” 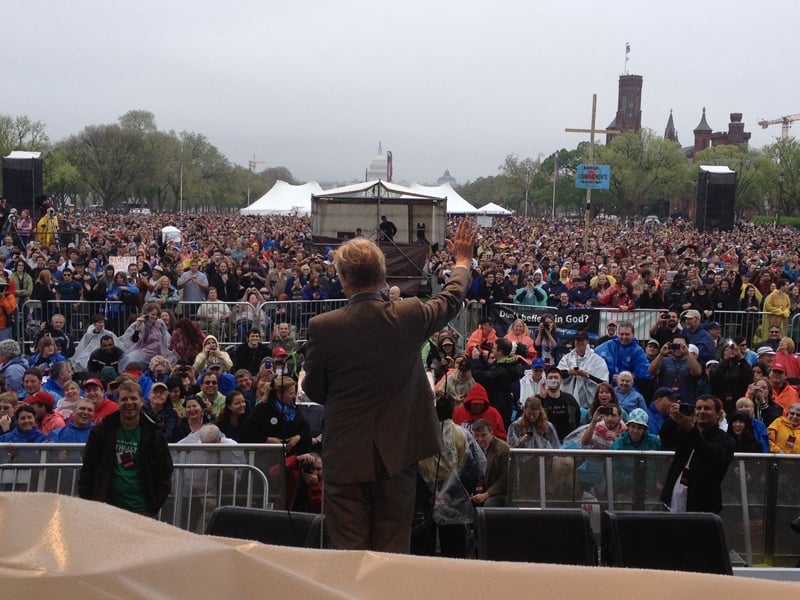 Richard Dawkins, center, waves to the crowd during the 2012 Reason Rally. Photo courtesy of David Silverman

The Reason Rally first came to Washington in June 2012, bringing some 20,000 people to the National Mall to hear atheist superstars such as Richard Dawkins, Bill Maher and Adam Savage.

Ten years earlier, a “Godless Americans March on Washington” drew a few thousand people  — most of them white, male and middle-aged. By contrast, the 2012 gathering attracted many young people and people of color. Organizers of this year’s rally hope to do even better.

Diversity is critical, atheist activists say, both to the health of so-called movement atheism and to crafting a secular voting bloc, or “atheist vote.”

The speaker lineup at this year’s Reason Rally reflects that. In addition to some who routinely pop up on the atheist circuit — science guy Bill Nye, comedian Julia Sweeney, magician Penn Jillette — there are some newer faces, many of them faces of color — comedian Margaret Cho, members of the Wu Tang Clan, comedian Leighann Lord and Rice University professor Anthony Pinn.

“With the Reason Rally bringing together people from across the spectrums of age, color, sexual orientation and ethnicities, I hope it sinks in that we’re not just Richard Dawkins clones and we don’t fit the tiny box many people want to put us in,” said Hemant Mehta, a popular atheist blogger and author of several books on atheism. “That’s not just for politicians and the public, by the way. I think we need to convince other atheists, too, that we’re a larger group than they imagine.”

Beyond church and state

If the first Reason Rally and Godless Americans March focused heavily on church-state issues — which are dear to American Atheists, the Freedom From Religion Foundation and the Stiefel Freethought Foundation, all sponsors of the event — this year’s tent is wider.

Lydell said the key to forming a nonreligious voting bloc is highlighting how these issues align with “secular values,” not just “atheist values.” Expanding beyond church-state issues is critical if movement atheism is to reach young people, who, polls show, are less concerned with eradicating religion.

“The core of what we believe in is reason,” she said. “So it doesn’t matter if you are a feminist first or an environmentalist first because we do have common ground, and that is reason.”

Secular Coalition will promote that common ground in several pre-rally events, including “advocacy days” on Thursday and Friday that will offer Reason Rally attendees training from professional lobbyists on how to organize and speak to legislators and then take them into Washington offices to meet and talk to legislators about their issues.

Devin Kuchynka, 24, thinks it will be. An aspiring politician, he will travel to the Reason Rally from Akron, Ohio, and participate in its two advocacy days.

When Kuchynka votes in November, his atheism will be one of the strongest influences on his choice, he said.

“The atheist vote, I think it is strong because you can have conservative atheists, you can have all these different issues everyone cares about but pretty much it seems to have an effect on people’s opinions when they deconvert,” he said. “So I think that while you are going to have a lot of variety, I definitely think it is a driving force in people’s minds when they vote.”

Diva Eytcheson, 50, is less sure. As with Kuchynka, this will be her first Reason Rally. Her atheism is important in the voting booth, she said, but other identities she claims — abortion rights advocate, feminist — are equally and sometimes more important, she said.

“I vote more on social causes and hindering the pork in politics than I do on atheism alone,” said Eytcheson, who is traveling from Denver to attend the Reason Rally. “Every issue has its complexities and there is no such thing as black and white.”

John C. Green, a professor of political science at the University of Akron, said such diversity can be the nascent atheist voting bloc’s biggest strength and greatest weakness.

He drew an analogy between them and the Catholic voting bloc.

“Catholics get on the same page for a few issues, but they are all over the place after that,” he said.

“I am sure the effort to organize a secular voting bloc will take a step forward this year, but I am not sure how big it will be.”

A step forward is further complicated by the fact that there is no superreligious candidate at the top of the ticket to oppose.

Trump has said he is a Presbyterian but has shown little scriptural literacy, and Hillary Clinton, a United Methodist, keeps her faith more private. Bernie Sanders seems to be a more secular than religious Jew.

But David Silverman, president of American Atheists and the main organizer behind 2012’s Reason Rally, sees the lack of a religious candidate as an opportunity.

Now, he said, “is our time to show politicians don’t have to rely on evangelicals, you can get more votes when you rely on the atheists,” he said. “And when you talk to the atheist, you can say, ‘This is when we are supposed to rise up, strike and take our place, while the enemy is weak.'”

The symbolism of the steps of the Lincoln Memorial is not lost on anyone involved with the Reason Rally. Atheist activists have been very open about crediting their recent successes to the LGBT rights movement, which they have intentionally copied. And LGBT activists, in turn, have credited the civil rights movement of the 1960s with showing them how to organize.

“We are standing on the shoulders of giants,” said Damerow.

Lydell, who like most nones is too young to remember the March on Washington, said staging the event on the steps is a chance to pay a debt. The discrimination faced by nonbelievers, she said, is not the same as that faced by the African-American or LGBT communities, but it is still discrimination.

“As long as we continue to get letters from high school students kicked out of their houses because they don’t share their parents’ religion, or from parents denied the opportunity to see their children because they don’t believe in God, we have to fight,” she said. “If the steps stand for something, it is that dream of inclusivity and equality, and that is what we want — to be seen and recognized and viewed as equals.”