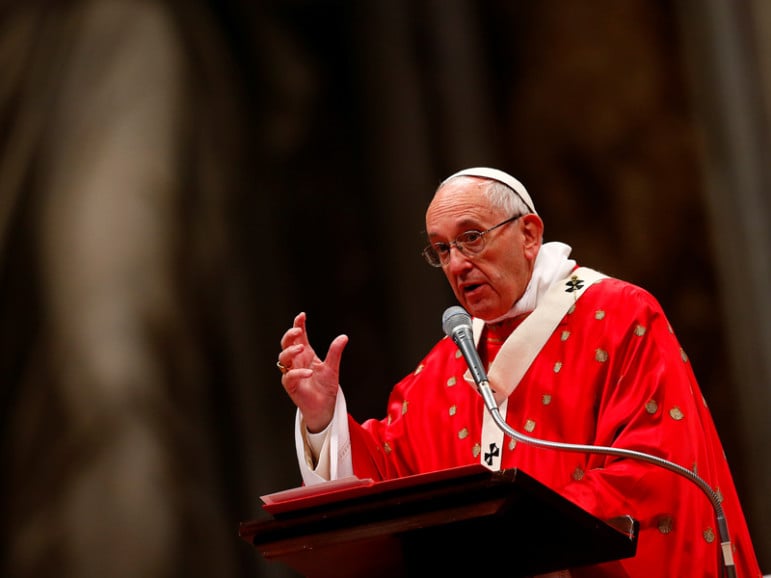 Pope Francis talks during a mass of Pentecost in Saint Peter’s Basilica at the Vatican on May 15, 2016. Photo courtesy of REUTERS/Tony Gentile *Editors: This photo may only be republished with RNS-POPE-ISIS, originally transmitted on May 17, 2016.

VATICAN CITY (Reuters) Bishops believed to be “negligent” when dealing with cases of sexual abuse by clergy will be investigated and could be removed from office under a new church law signed by Pope Francis.

Francis has pledged zero tolerance for anyone in the church who abuses children and once likened such abuse to a “satanic mass.” In 2014 he established a Vatican commission intended to set best practices to root out abuse in parishes.

With this latest decree, which was formally published on Saturday (June 4), he puts into action what he promised last year when he approved a Vatican tribunal to judge bishops accused of covering up or failing to prevent abuse of minors.

Victims’ groups have repeatedly demanded that the Catholic Church do more to make bishops accountable for abuse in their dioceses, even if they were not directly responsible for it.

David Clohessy, director of the Survivors Network of those Abused by Priests, remained skeptical about the church’s response.

“Instead of just sacking bad bishops, or turning over abuse records to law enforcement, the Vatican is setting up yet another untested, internal church ‘process’ to purportedly deal with bishops who ignore or conceal child sex crimes,” Clohessy said in a statement.

“A ‘process’ is helpful only if it’s used often enough to deter wrongdoing. We doubt this one will be.”

The Catholic Church has been rocked over the past 15 years by scandals over priests who sexually abused children and were transferred from parish to parish instead of being turned over to authorities and being defrocked.

In some developed countries, particularly in the United States, the Church has paid tens of millions of dollars in settlements.

While a bishop can already lose his job under the existing canonical code for any “grave reasons,” the pope said he wanted to specify with the decree that such reasons included instances where bishops fail to tackle abuse cases adequately.

Bishops “must be particularly diligent in protecting those who are the weakest among the people entrusted to them,” Francis said in the decree.

He said a bishop can be removed from office if he has “through negligence, executed or omitted acts that caused serious harm to others,” be it physical, moral, spiritual or financial.

The decree requires the Vatican to launch an investigation if “serious evidence” of negligence is found. The bishop will be given the opportunity to defend himself. Ultimately, the Vatican can issue a decree to remove him or ask him to resign within 15 days.

Any removal decision has to be approved by the pope, who will be assisted by a group of legal advisers.