MADRID (RNS) Hieronymus Bosch may have died 500 years ago, but he’s inspired episodes of “The Simpsons,” rock ’n’ roll lyrics, children’s book characters, movies from “The Exorcist” to David Fincher’s “Seven” — even Dr. Martens boot designs. Last year when Leonardo DiCaprio visited Pope Francis, the actor brought along a book about Bosch as a gift for the pontiff.

How does an artist who has been dead for half a millennium pull off such a feat?

This year, the 500th anniversary of Bosch’s death provides some answers through two major exhibitions. The first was in the spring at the Noordbrabants Museum in his hometown of ‘s-Hertogenbosch (Den Bosch) in the Netherlands. The show shattered records for the museum, with well over 400,000 visitors during its three-month run, in a city of only 140,000. On May 31, “Bosch: The 5th Centenary Exhibition” opened in Madrid’s Museo del Prado, where it is bound to draw even more visitors through the high-tourism summer. 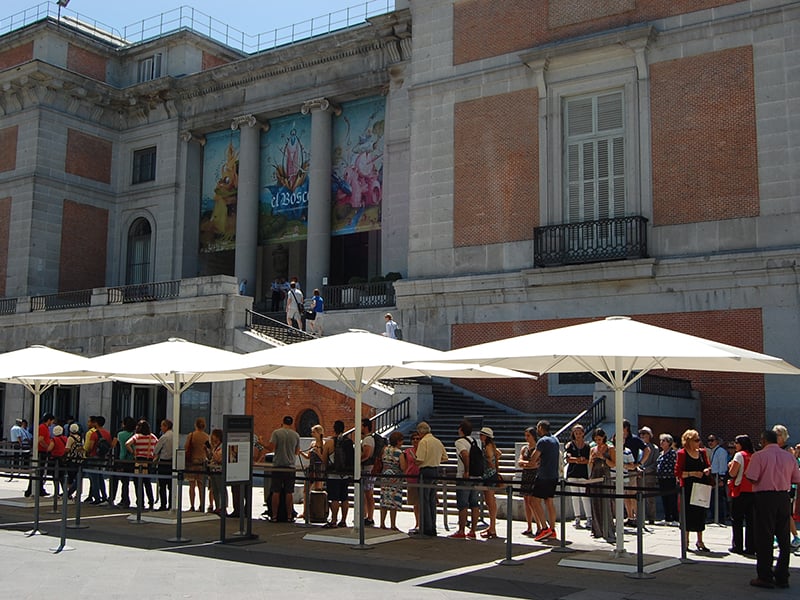 People wait in line for tickets to the exhibition “Bosch: The 5th Centenary Exhibition” at the Museo Nacional del Prado in Madrid. Photo by Wanda Rodriguez

With a majority of Bosch’s surviving works all on display at the same time in El Prado, visitors can begin to piece together the reasons for his ongoing popularity. Small drawings are placed alongside several large-scale triptychs, while X-rays of paintings reveal the painter’s process and works by his contemporaries supply some context.

In the end, it’s clear, Bosch painted in radical new ways for his day, and his revolutionary style remains enticing, baffling and sometimes revolting to modern viewers. Bosch gave us many of our modern visions of hell.

The devil in the details

Based on the amount of time visitors spend peering into the nooks and crannies of Bosch’s hells, there’s little doubt the nightmarish scenes are what lure most spectators: human bodies broken open, half-human/half-creature devils scurrying about, scenes of torture, disfigurement and dismemberment. Much of it isn’t for the squeamish, even in today’s horror-bathed media culture.

Let’s be clear: “The Simpsons” and “The Exorcist” didn’t borrow Bosch’s scenes of the idyllic Paradise or images of Jesus, but images of demons, flying fish, bodily torment, a cryptic tree-man and a great bird-devil who consumes humans and then defecates them into a gaping hole in the ground.

Paintings such as “The Garden of Earthly Delights” triptych (permanently installed in the Prado) and the  “Temptation of St. Anthony” triptych (on loan from the National Museum of Ancient Art in Lisbon) are large, colorful visions of life on earth, with its sins and temptations, and a potentially tormented afterlife. One could stand for hours and sort through the figures that litter the landscapes, trying to make sense of them, as audiences and art historians have been doing for years.

Imagine a page of “Where’s Waldo?” but with darker colors and beasts scattered around a surreal landscape of dead trees, burning cities and ruined castles.

And also: There’s no Waldo. Part of Bosch’s appeal is that there’s no simple “key” to unlock the secrets that would let us know what all of these strange beasts and buildings mean.

“The only thing we can safely say,” notes Reindert Falkenburg in the exhibition catalog, is that works such as “The Garden of Earthly Delights” appeal to people’s “interpretative impulse.” We see something we don’t understand and immediately set to interpret it in a way that makes sense to us.

Through the centuries, people have put forward multiple proposals to solve Bosch’s mysteries: He was a drug addict, an astrologist, an alchemist, a member of one or other esoteric sects. Dan Brown could write a novel on each of his triptychs.

Diane Apostolos-Cappadona, professor of religious art and cultural history at Georgetown University, notes how Bosch’s images seem to be “easy to read,” or so the viewer is initially led to believe. But then the viewer “is intrigued by the mastery of his brushstrokes in creating intricate details.”

Devoted, almost obsessive, attention to the hellish details makes it seem Bosch had an intimate knowledge of these other worlds, like he’d really been there himself and seen the misery and horror. The other great artist who offered as much knowledge about devilish worlds was the poet John Milton. His epic poem “Paradise Lost” (1667) is filled with so many rich and vibrant details about Satan that the poet William Blake accused Milton of being part of the devil’s party himself — the old it-takes-one-to-know-one insult.

Was Bosch part of the devil’s party? His biographical details, sparse as they are, suggest otherwise. His hometown, colloquially known as “Den Bosch,” from where the painter took his name, was a prosperous market town. He grew up within the Catholic Church, in a local sect called the Illustrious Brotherhood of Our Lady, at a time when early rumblings of religious reformation were happening across Northern Europe.

Bosch died the year before Martin Luther famously nailed his 95 theses to the Wittenberg door, protesting the excesses of the papacy and inaugurating one of the great splits in Christianity. These reforming movements, both inside and outside the Catholic Church, were propelled by the democratizing power of the printing press as much as theology. Both pushed away from hierarchy and toward individual, personal devotion. “Bosch provides an intimate experience between the viewer and the figures within his paintings,” suggests Apostolos-Cappadona. “He is able to draw the viewer into the painting so that the painted environment envelopes her and she comes to believe that the ‘coded message’ within the frame of the painting is being communicated directly to and solely for her.”

The landscapes may create epic narratives of heaven and hell, creation and afterlives, but viewers can still find their way into the story.

Bosch was an apocalyptic painter, if we understand apocalypse in its literal form as an “unveiling” or “revelation.” Apocalypse is not so much the total end of the whole world as much as a revealed account about what might be coming. Prophetic visionaries such as St. John supplied the ancient stories in which visions of coming worlds were depicted to warn others: This could happen to you if you don’t change your ways and get it right.

Triptychs such as “Visions of the Hereafter,” with its literal rendition of a light at the end of the tunnel, and “The Last Judgment,” with barely anyone seeming to survive the ordeal, begin to demonstrate why the Lutheran doctrine of grace might have been so attractive at the time.

When DiCaprio gave the pope the book, he turned to a page with a layout of “The Garden of Earthly Delights.” The actor interpreted Bosch’s work through environmental devastation, saying the left panel was how the Earth was supposed to be. Today we have arrived at the right panel, with its blackened sky. DiCaprio’s interpretation, as coherent as many of the others put forward, gets the apocalyptic dimensions right. He sees it as a warning. It may look like the end of the world, but it doesn’t have to be that way.

For Bosch, the behaviors that needed changing were the individual deadly sins such as lust, greed and gluttony. Today’s sins are global.

One viewpoint shared by most commentators is that Bosch does not provide a very flattering view of the “common man.” He was in many ways an elitist. People are depraved, fallen, and although redemption is possible through Jesus, Mary and the saints, there seems little hope for it. Bosch’s heavens are always empty and his hells are full.

If he’s anywhere sympathetic to humans, he’s got a soft spot for the hermits, the ones out on the edges of the wilderness, the ones who get visions and tell fantastic tales of other worlds. People perhaps like himself.

And he’s not for everyone. One visitor to the exhibition, a theology student from Mexico City, left unimpressed, and didn’t care for the overwhelmingly negative view of humanity. “Too much dualism; it’s either good or bad,” she said. “Too much of a view that sex is evil. The body is evil. It’s just not a good view of Christianity.”

So did Bosch’s plan backfire? He seems to have meant to scare people, to warn viewers of what might happen if they don’t stop their greedy, gluttonous, lustful ways. And, sure, we don’t want to be impaled and roasted over a fire by a blue-skinned goblin, but we sure do like to look at others in those situations. Not just the hundreds of thousands looking at Bosch this year, but also the multimillion-dollar economy of haunted houses, horror films and the all too real images of war.

Horror has become part of our moral landscape. As Susan Sontag put it, “Wars are now also living room sights and sounds.” The worlds that were so fantastically other in Bosch’s age have become intertwined with images of our everyday lives. Perhaps we go to the museum to remember a time when the worlds could be kept separate.