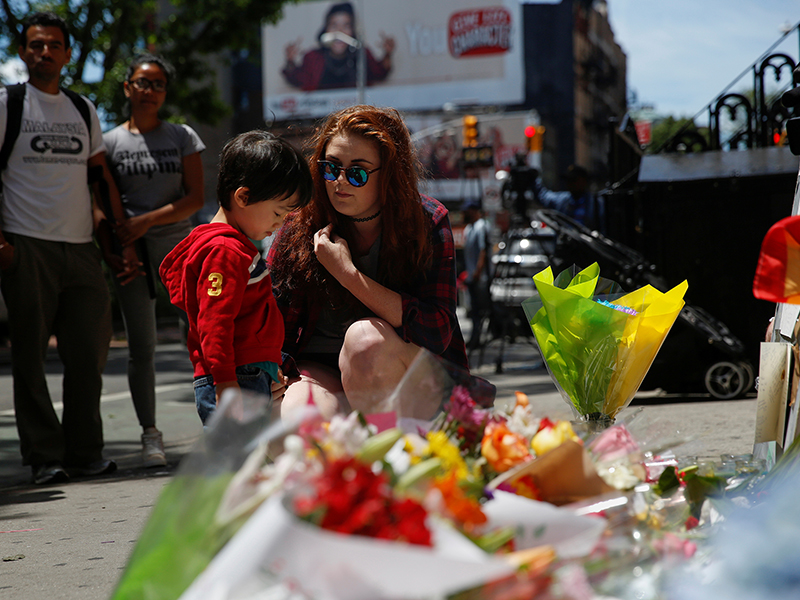 Shelby Heye, a nanny for Nico, 2, speaks with him at a memorial outside The Stonewall Inn remembering the victims of the Orlando massacre in New York, on June 13, 2016. Photo courtesy of REUTERS/Shannon Stapleton *Editors: This photo may only be republished with RNS-SOCOLOVSKY-OPED, originally transmitted on June 13, 2016.
June 13, 2016
Jerome Socolovsky

(RNS) Growing up in the seventies, I never questioned my parents’ love for their adopted homeland.

And yet as immigrants from Argentina, there were things they did not love: rock and roll music, and teenagers having sex.

I know as well as anyone that living between two cultures is fraught, even when the social mores are not as drastically divergent as they were for Omar Mateen, the suspect in the massacre that left 50 dead at a nightclub in Orlando, Florida.

In high school and college, I fought with my mother over her expectations that I would abstain from sex, and marry a virgin, and ended up adapting to the sexual norms around me.

And my first job out of college was as a waiter at a trendy Manhattan restaurant, the Quilted Giraffe, where I was the only heterosexual on staff. It made me see gays not just as people, but as great friends. A man holds a banner as he takes part in a vigil in memory of the victims of the gay nightclub mass shooting in Orlando, in the Soho district of London, on June 13, 2016. Photo courtesy of REUTERS/Dylan Martinez *Editors: This photo may only be republished with RNS-SOCOLOVSKY-OPED, originally transmitted on June 13, 2016.

But what leads the son of immigrants from another far-flung conservative nation, Afghanistan, to reportedly abuse his ex-wife and be repulsed by homosexuality apparently to the point of arming himself with assault rifle and walking into a gay disco?

The display of same-sex affection that Mateen witnessed early Sunday morning at the Pulse nightclub – before he allegedly began pulling the trigger -- would have been scandalous to say the least in his parents’ homeland.

Mateen’s father, Seddique, said his son was horrified recently by the sight of two openly gay men kissing in Miami.

But according to the father, the son overstepped a line because “Only God can punish homosexuality.”

Homophobic views are hardly the preserve of Muslim societies. Acceptance of gays as full equals – with the right to marry – is still fresh in America, and there are still many among us with religiously motivated objections. 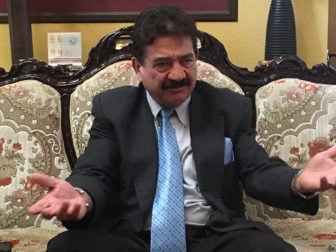 Seddique Mateen, the father of Omar Mateen, who attacked a gay night club in Orlando before being shot dead by police, speaks with reporters at his home in Port Saint Lucie, Florida, on June 13, 2016. Photo courtesy of REUTERS/Bernie Woodall *Editors: This photo may only be republished with RNS-SOCOLOVSKY-OPED, originally transmitted on June 13, 2016.

And lest we think that only radicalized Muslims are capable of righteous violence, last November a man convinced that he was acting as a good Christian walked into a Planned Parenthood clinic and killed three people.

But being an immigrant or the child of one adds a level of cultural dissonance that can be unsettling.

And the current exodus of refugees from the Middle East is bringing many young men from conservative countries, many of them Muslims, whose views of gender and sexuality are markedly different from our own.

Europeans are still in shock over reports that as many as 1,000 women were sexually assaulted by men of North African and Arab descent last New Year’s Eve outside the central train station in Cologne, Germany.

The success that ISIS has had at recruiting young followers in the West is another example of young people sometimes romanticizing the societies that many of their parents left behind, and many fled.

I am not saying that anyone caught between two cultures will become a terrorist. On the contrary, our country is full of second- and third-generation immigrants – including Muslims – who found their own paths between generational cultures. One need only look at New York, Silicon Valley, and other diverse and dynamic metropolises and you’ll find many who fulfilled the American dream.

Ultimately my parents’ own thinking on sexuality evolved to the point where they didn't even blink when I started living with the woman who is now my wife. And I have no doubt they would have accepted me even if I had turned out to be gay.

Having parents born in another country led me to learn foreign languages and made me the journalist I am today. And it even gave me an appreciation for the some of their favorite tango crooners.

Related Posts
By Paul Robinson
We can’t cancel ‘white Jesus,’ but we can keep telling our church’s story
By Yonat Shimron
Religious conservatives look to the next Supreme Court rulings on religious liberty
By Mark Silk
Measuring the religious significance of the Supreme Court's LGBT decision
By Thomas Reese
Crowded into camps, refugees are sitting ducks for COVID-19
By Beth Murphy
Women in Muslim countries prepare for ‘least, most’ Ramadan