(RNS) The Southern Baptist Convention, born in 1845 in a split over its support for slavery, has passed a resolution calling for Christians to quit using the Confederate flag.

“We call our brothers and sisters in Christ to discontinue the display of the Confederate battle flag as a sign of solidarity of the whole Body of Christ, including our African-American brothers and sisters,” reads the resolution adopted Tuesday (June 14) at the convention’s annual meeting in St. Louis.

Former Southern Baptist President James Merritt, who said he was the great-great-grandson of two Confederate Army members, helped draft that language, which included striking a paragraph that linked the flag to Southern heritage: “We recognize that the Confederate battle flag serves for some not as a symbol of hatred, bigotry, and racism, but as a memorial to their loved ones who died in the Civil War, and an emblem to honor their loved ones’ valor.” 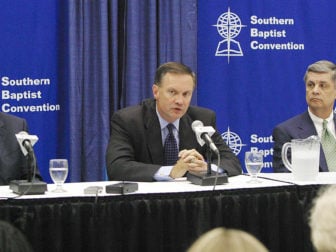 The Baptists considered the resolution almost a year after nine people were gunned down at Emanuel African Methodist Episcopal Church in Charleston, S.C., by an alleged killer who posed for photos with the rebel flag. Pastor Dwight McKissic of Arlington, Texas, proposed the original language of the resolution in part to honor those victims.

After the shootings, South Carolina removed the flag from its Capitol and Oklahoma Baptist University recently stopped displaying the Confederate flag in a window of its campus chapel. 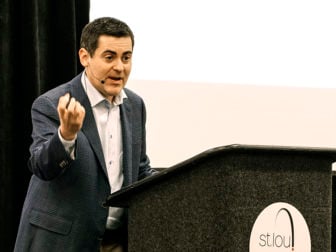 Russell Moore, president of the Ethics and Religious Liberty Commission, gives a TED-style talk as a part of the Hispanic Baptist Pastors Alliance meeting in St. Louis. Photo by John Stroup, courtesy of Baptist Press

“The Southern Baptist Convention made history today and made history in the right way,” said Moore, president of the SBC’s Ethics and Religious Liberty Commission. “This denomination was founded by people who wrongly defended the sin of human slavery. Today, the nation’s largest Protestant denomination voted to repudiate the Confederate battle flag and it’s time and well past time.”

But the passage of the resolution was a surprise even to some supporters.

“It was the most wonderful surprise, a complete denunciation of the flag because of what it represents and because of the Southern symbol that it is to African-American brothers and sisters in Christ,” said Alan Cross, a Southern Baptist minister from Alabama and author of “When Heaven and Earth Collide: Racism, Southern Evangelicals, and the Better Way of Jesus.” 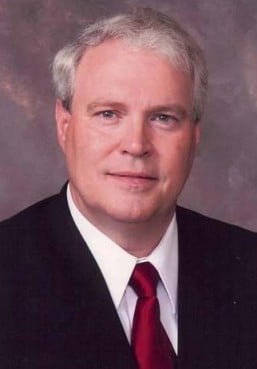 Roger S. Oldham, spokesman for the denomination’s Executive Committee, said the changes made to the resolution after a committee proposed it indicated that the messengers, or delegates, gathered in St. Louis wanted “to take one bold step rather than a series of smaller steps.”

Some of the Southern Baptists at the meeting were upset with the resolution, and Paul Pressler, a retired judge from Texas and an architect of the conservative resurgence in the denomination more than 30 years ago, complained that he was not allowed to speak. Officials said time ran out before he could.

Jason Lupo, pastor of a Tallulah, La., church, said he wasn’t speaking against the resolution but he thought it should be removed from consideration.

“This is a political issue, not a kingdom issue,” he said. “And so I think the resolution needs to be removed completely and doesn’t even need to be dealt with.”

Another, who urged rejection of the resolution, wondered if it could lead to support for other moves of “political correctness” such as rejecting the U.S. flag that flew over slave ships or Southern Baptist heroes who were “avid supporters of the Confederacy.”

Resolutions Committee Chairman Stephen Rummage said Southern Baptist heroes “did so many things that are commendable” and are not covered by the resolution.

“We are talking about one particular symbol that is used by some and is perceived by many as a symbol of racism and it causes great harm,” he said.

The 2016 resolution language is a sharp contrast from the denomination’s support of the Confederacy that was cited in an 1863 resolution, in the midst of the Civil War: “(W)e have no thought of ever yielding, but will render a hearty support to the Confederate Government in all constitutional measures to secure our independence.”

Merritt said Tuesday’s resolution was not about political correctness but more about a proper Christian witness.

“This flag is a stumbling block to many African-American souls to our witness,” he said. “And I rise to say that all the Confederate flags in the world are not worth one soul of any race.”

Signs of the Times
Does the pope need an editor?
Follow us on Facebook!
Submit your photos to RNS