A dozen policemen stood by but did not intervene as the ultra-Orthodox men tried to drown out the service on Thursday (June 16), first with songs, then with whistles. Some cursed the 200 Reform and Conservative worshippers, insisting they are not Jews, while others threw water bottles.

The non-Orthodox prayer service took place despite the opposition of Rabbi Shmuel Rabinowitz, the ultra-Orthodox rabbi who oversees the Western Wall. On Thursday, the Ministry of Religious Services informed Rabinowitz that he has no jurisdiction to prevent egalitarian prayers in the public plaza.

Reform and Conservative Jews, whose institutions and rabbis receive virtually no funding from the Israeli government, organized the prayers in the plaza – located directly behind the men’s prayer section of the Western Wall – to protest Israeli government actions they say marginalize them and prevent men and women from worshipping side by side.

Non-Orthodox have long prayed nearby at Robinson’s Arch, another section of the Western Wall, run by the Conservative movement. The main Western Wall site is run like an ultra-Orthodox synagogue, which separates men from women.

But on Tuesday, Rabbi Shlomo Amar, one of the country’s two chief rabbis, commandeered Robinson’s Arch to hold an Orthodox prayer service. Contrary to the custom of the site, Amar erected a mechitza, or separation barrier, between male and female worshippers.

The protest service that followed comes at a time when the Reform and Conservative movements as well as the feminist prayer group Women of the Wall are demanding the Israeli government implement a Jan. 31 Cabinet decision to turn Robinson’s Arch into Israel’s first official egalitarian prayer space, where both men and women and people of all Jewish traditions can pray.

The agreement to fund and enlarge the prayer space followed nearly three years of negotiations between the Israeli government and American and Israeli representatives of the Reform and Conservative movements, the Jewish Federations of North America and Women of the Wall.

In March, under pressure from ultra-Orthodox lawmakers in his coalition government, Prime Minister Benjamin Netanyahu froze the plan and asked all parties to compromise.

Rabbi Gilad Kariv, president of the Reform movement in Israel, said Thursday’s service was designed to pressure the government, not provoke ultra-Orthodox Jews.

He called the inaction of the police during the protest service “an outrage.”

“I assume the police received a directive from the Rabbi of the Wall or the police high command not to interfere,” he said.

Kariv said the parties negotiating with the government agreed not to to take a public stand while talks were ongoing. That no longer applies.

“The government approved the agreement, the prime minister agreed to it, but five months have passed,” he said. “Every day we are receiving signals the government has no intention of implementing the agreement and is instead taking aggressive steps against the non-Orthodox.”

Among those steps is a bill in Israel’s parliament, or Knesset, that would overturn a recent High Court decision to permit Reform and Orthodox converts to Judaism to immerse themselves in public mikvahs (ritual baths) during their conversions. 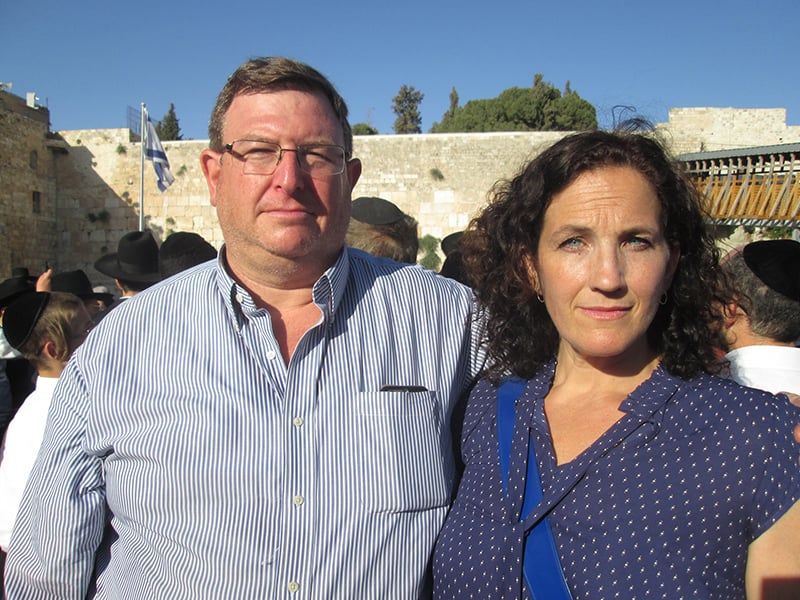 Rabbi Loren Sykes, with his wife, Rebecca Sykes, said ultra-Orthodox men who tried to disrupt the non-Orthodox prayer service removed his yarmulke and cursed him. RNS photo by Michele Chabin

Rabbi Loren Sykes, an American Conservative rabbi who immigrated to Israel three years ago, said he was spat upon and cursed during the prayer service.

“Unfortunately there are Jews who can’t tolerate Jews who hold different opinions. Someone took off my kippah (yarmulke). Someone else said I should have been killed in the Holocaust,” Sykes said.

Standing several feet from the near-riot, David Mordechai Magid, an ultra-Orthodox Jew, insisted that “men and women should not be praying together” as the Reform and Conservative worshippers were doing. The Orthodox men had a right to drown out the worshippers, he added, but said violence isn’t the way.

Rabbi Andrew Sacks, a Conservative rabbi and pluralism activist, said non-Orthodox Jews both in Israel and the U.S. have been very patient, but they are at their breaking point.

The Robinson’s Arch agreement “has been all talk and no action by the office of the prime minister,” he said. “So we shall take action. We shall pray in the Kotel (or Western Wall) plaza, men and women together, in a peaceful manner, until the government lives up to the agreements it has made with us.”