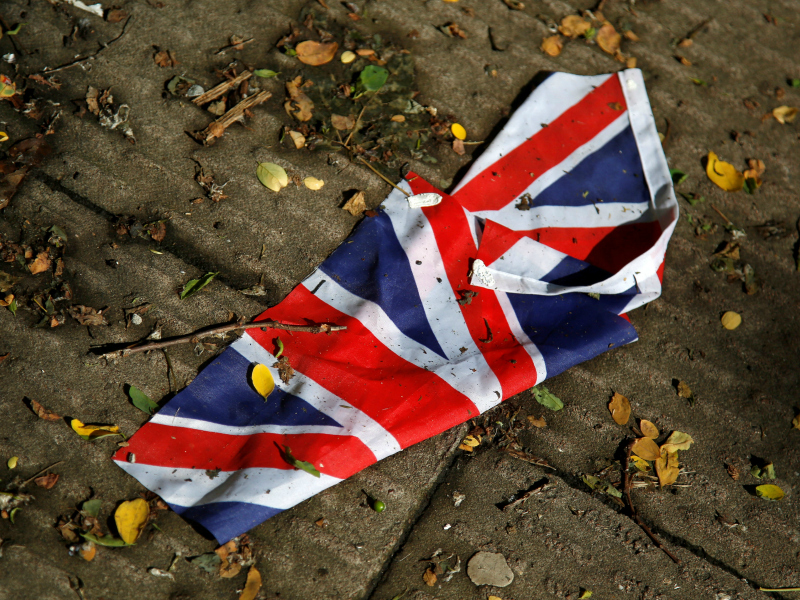 A British flag that was washed away by heavy rains lies on the street in London on June 24, 2016, after Britain voted to leave the European Union in the Brexit referendum. Photo courtesy of REUTERS/Reinhard Krause
June 24, 2016
Cathy Lynn Grossman 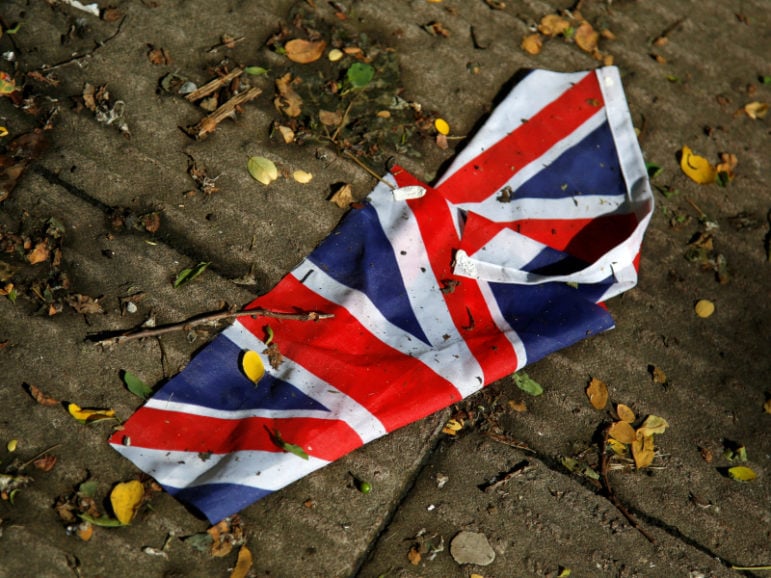 A British flag which was washed away by heavy rains lies on the street in London June 24, 2016 after Britain voted to leave the European Union in the Brexit referendum. Photo courtesy of REUTERS/Reinhard Krause.

(RNS) Britain's vote to leave the European Union -- sending economic  shockwaves across the globe, driving out the prime minister and crashing the British pound -- has faith leaders facing a new challenge:

How to reconcile this act of national door-slamming on the EU with a religious message of welcoming the stranger and resolving conflicts through dialogue.

Early Friday (June 24), facing news of the victorious vote to leave the EU, Pope Francis and Church of England leaders tied their acknowledgement of "the will of the people" to cautions that care for the vulnerable, wherever they live, must not be forgotten.

Francis told media aboard his papal flight to Armenia that the "leave" vote "requires a great responsibility on the part of all of us to guarantee the good of the people of the United Kingdom as well as the peaceful coexistence of the entire European continent."

"This is what I expect," the pontiff continued, according to The National Catholic Reporter.

Francis in the past had criticized the European Union but still considers it a vital organ for international cooperation, one that should be bolstered not undermined.

Cardinal Vincent Nichols, the archbishop of Westminster and the UK's leading Roman Catholic prelate, called for "respect and civility" as the nation set out in a  "demanding" direction, according to a report from Catholic News Agency.

Just a week before the vote, Jo Cox, a member of Parliament and voice for remaining in the EU, was murdered, allegedly by a man screaming "Britain First!" -- the name and rallying cry of a far-right Brexit-backing group.

“We pray that in this process the most vulnerable will be supported and protected, especially those who are easy targets for unscrupulous employers and human traffickers,” said Nichols.

“We pray that our nations will build on our finest traditions of generosity, of welcome for the stranger and shelter for the needy.”

His comments acknowledged the bitterness of the Brexit battle, which underscored strong anti-immigrant sentiment in England that reminded some in the United States of the rhetoric of the U.S. presidential campaign. Lutheran pastor in Denver, Nadia Bolz-Weber tweeted her regrets.

To my UK friends: If the anti-immigrant & fear mongering BS on this side of the pond in any way influenced #Brexit I'm so sorry.

Church of England leaders, who largely backed the defeated "Remain" campaign, faced a sharp divide among the faithful from the pews to Parliament.

A joint statement of the Archbishops of Canterbury and York said it was time to “re-imagine both what it means to be the United Kingdom in an interdependent world and what values and virtues should shape and guide our relationships with others,” according to The Telegraph.

“Many of those living among us and alongside us as neighbors, friends and work colleagues come from overseas and some will feel a deep sense of insecurity.

“We must respond by offering reassurance, by cherishing our wonderfully diverse society, and by affirming the unique contribution of each and every one.”

A prominent Catholic theologian who analyzed the bitter campaign said the vote laid out the deep fissures facing not only Britain but all of Europe.

"Each person has thought only of their own interests, egotistical. The ruling class has been like this and also common citizens," the Rev. Timothy Radcliffe, a Dominican priest and theologian, told Italian media.

"The terrible murder of the wonderful MP Jo Cox has brought to light the gap between the establishment and the common people, impoverished and deprived of possibility, whom surrender to the extremism of the right, and respond to difficult situations in which they find themselves with blind violence," Radcliffe said.

But there were also religious voices that rejoiced in Brexit.

The Economist noted that in Northern Ireland, some devoutly evangelical Protestants envision the EU as an instrument of the Antichrist.

They saw the move to leave as a fulfillment of religious prophecy in Revelation 18:4, when evil Babylon falls and a voice from heaven says, "Come out of her, my people, that ye be not partakers of her sins, and that ye receive not of her plagues."

The Economist didn't overlook that some were also attracted to "the prospect of potentially  lucrative trade deals with the world's rising powers. Some readers wondered what purpose such economic projects could serve if the end times are so close."