(RNS) At its quadrennial meeting last month, the United Methodist Church decided not to take up contentious LGBT issues. But that’s not stopping its regional conferences from making decisions on their own.

The Rev. Karen Oliveto, the Rev. Frank Wulf and the Rev. David Meredith have been nominated for election at the meetings of the denomination’s Western and North Central jurisdictions July 13-16, according to the Reconciling Ministries Network.

It’s not the first time an openly gay candidate has been nominated — Wulf has been nominated before, according to Reconciling Ministries Executive Director Matt Berryman — but there’s “no question” there is momentum this time after last month’s United Methodist Church General Conference in Portland, Ore.

“I feel like there’s a kind of a groundswell of movement,” Berryman said.

“Many, many annual conferences are refusing to comply with the Book of Discipline, openly ordaining LGBT people, passing resolutions that affirm the image of God in transgender people and really building on the pivot that was implemented at General Conference.”

According to the denomination’s Book of Discipline, “The practice of homosexuality is incompatible with Christian teaching.”

Meredith is one of 17 nominees for bishop in North Central, which will elect four bishops at its upcoming conference. Six people have been nominated in Western, which will elect one, according to M. Barclay, director of communications for Reconciling Ministries. Altogether, 54 candidates are vying for 15 spots, Barclay said.

The election follows the decision by the 2016 General Conference to pass on all proposals related to human sexuality. Instead, the denomination will create a commission to discuss the conflict over sexuality that could lead to a special session of the conference in 2018 or 2019.

The church has been in no rush to put together that commission, according to reports from the United Methodist News Service.

And the 56 regional U.S. conferences, which make up the five jurisdictions, have been left to interpret what to do in the meantime. Those conferences meet yearly. 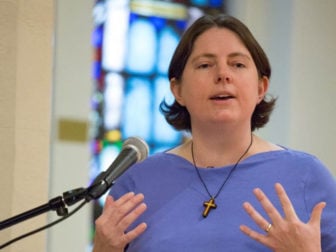 Clergy members of the Baltimore-Washington Annual Conference, meeting June 1, 2016, in an executive session, did not approve Tara “T.C.” Morrow for commissioning as a deacon in the United Methodist Church. Photo by Steven D. Martin

In early June, clergy in the Baltimore-Washington Conference voted against Tara “T.C.” Morrow, a lesbian who had been recommended for the position of deacon.

And the South Georgia Conference passed a motion asking its bishop to “not receive … clergy that have publicly stated their intent to disregard the current language of the ‘Book of Discipline'” regarding sexuality.

But other conferences have taken steps toward inclusion, and Berryman said, “It would be hard to imagine how anybody could avoid drawing the conclusion that the ball is rolling quite rapidly now.”

The New York Annual Conference already has ordained or commissioned four people who came out as LGBT in an open letter published in the days leading up to the General Conference. 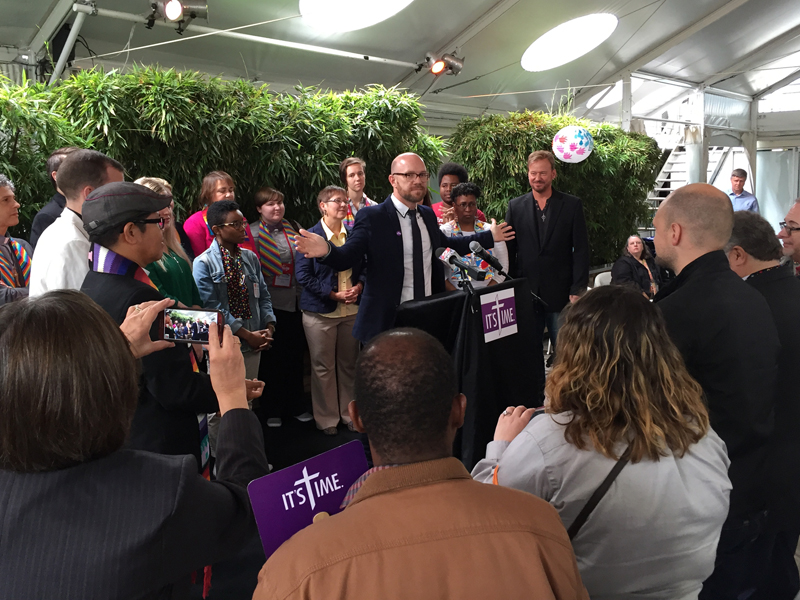 A press conference hosted by the Reconciling Ministries Network announcing more than 1,500 Methodist clergy have signed an open letter supporting their LGBTQ colleagues at the Jupiter Hotel in Portland, Ore., during the United Methodist Church General Conference on May 16, 2016. RNS photo by Emily McFarlan Miller

At its yearly meeting, the New England Conference overwhelmingly approved a resolution saying it “will not conform or comply” with the sexuality provisions of the Book of  Discipline.

And the clergy session of the Oregon-Idaho Conference issued a statement supporting “the gifts and graces” of LGBT people in ordained ministry.