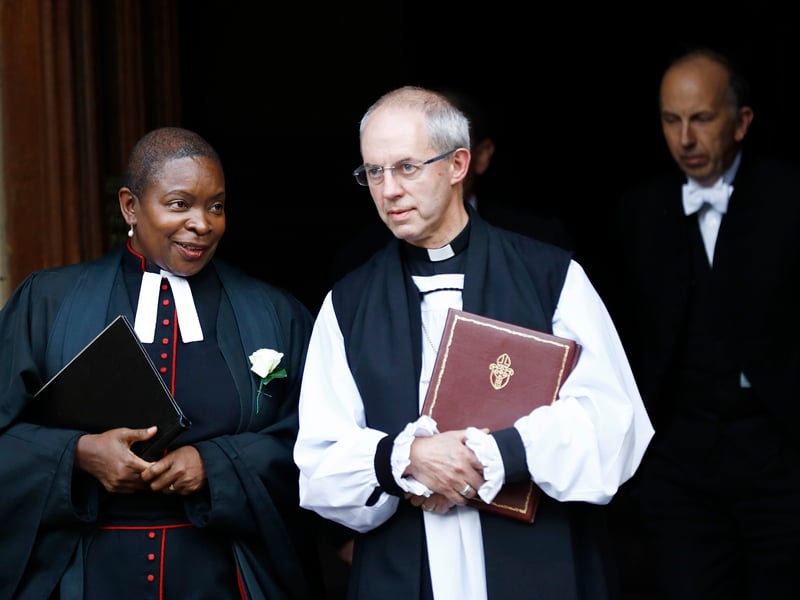 Archbishop of Canterbury Justin Welby chats with a fellow member of the clergy as they walk from Parliament to St. Margaret’s Church for a service of remembrance on June 20, 2016 for British lawmaker Jo Cox, who was shot and stabbed to death June 16 in London. Photo courtesy REUTERS/Stefan Warmth
July 1, 2016
Yonat Shimron

(RNS) The archbishops of Canterbury and Westminster are among British faith leaders calling on citizens to challenge prejudice, following a sharp rise in xenophobic attacks after the country’s referendum to leave the European Union.

Describing the uncertainty and fears that have followed the Brexit vote, religious leaders said people should not become mistrustful of “the other”:

“For all that lies outside of our personal control, every person has the power to conquer their own instinct to apportion blame to others for perceived injustice.

“Today we call upon every citizen of our great country to recognize personal accountability for their every action, rather than avoiding that responsibility by looking for scapegoats, and to challenge racial and communal prejudice wherever it is found and thus ensure that we are, more than ever, a country united,” said the letter published in The Times newspaper on Friday (July 1).

During the week that followed the June 23 vote to leave the European Union, 331 hate crime incidents were reported, compared to 63 in an average week, the National Police Chiefs' Council said on Thursday (June 30).

August 10, 2020
Related Posts
By Amy Butler
How to celebrate Christmas: Change the world
By Catherine Pepinster
Chief rabbi's attack on anti-Semitism keys reckoning over faith in UK election
By Claire Giangravé
In private meeting, Pope Francis opens up about his faith after his election
By fredrick nzwili
Alarmed African churches demand end to persistent xenophobic attacks in S. Africa
By Nikolia Apostolou
Virtual rituals give expat Greeks a chance to live out their faith from abroad