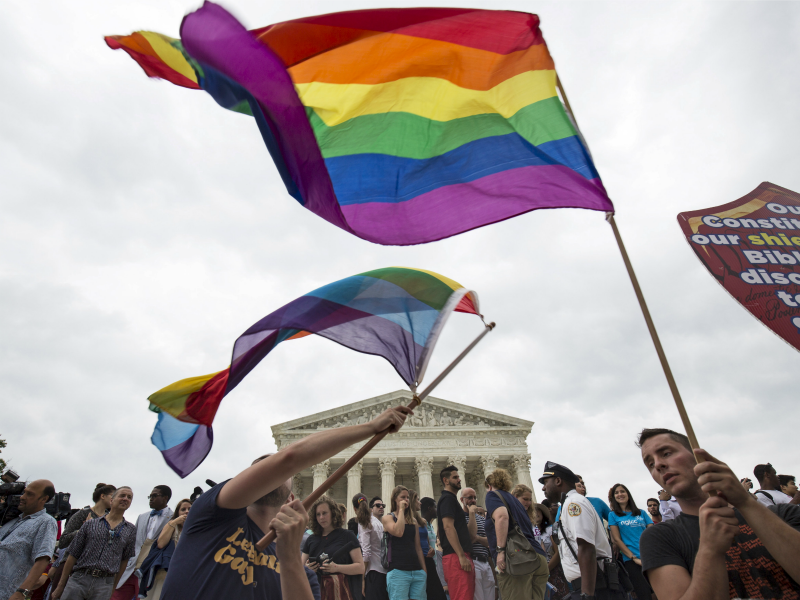 Supporters of gay marriage wave the rainbow flag after the U.S. Supreme Court ruled on June 26, 2015, that the U.S. Constitution provides same-sex couples the right to marry. The court ruled 5-4 that the Constitution's guarantees of due process and equal protection under the law mean that states cannot ban same-sex marriages. Photo courtesy of Reuters/Joshua Roberts
July 1, 2016
Yonat Shimron

JACKSON, Miss. — A federal judge blocked a Mississippi law that would have allowed clerks and businesses to cite religious objections to same-sex marriages before it was scheduled to go into effect, ruling it unconstitutional.

In his 60-page ruling, Reeves wrote that HB1523 “violates both the guarantee of religious neutrality and the promise of equal protection of the laws” and was therefore unconstitutional.

Reeves wrote that the title, text and history of the law show it is "the state's attempt to put LGBT citizens back in their place" in response to last summer's Supreme Court ruling that legalized gay marriage nationwide.

The order came days after Reeves disabled part of the bill Monday, when he issued an injunction barring Mississippi from denying same-sex marriage licenses.

Mississippi Gov. Phil Bryant signed the bill into law in April. In addition to allowing clerks to recuse themselves, the law incorporated three beliefs that businesses could cite to refuse service based on religious objections to clients. They are that marriage should only be between one man and one woman; that sexual intercourse should only happen in such a marriage; and that one's gender is assigned at birth and cannot be changed.

"The state has put its thumb on the scale to favor some religious beliefs over others," Reeves wrote.

Attorneys for the state are expected to appeal the decision. The ruling was in response to two lawsuits filed weeks ago by gay and straight plaintiffs.

More than 100 bills were filed in more than 20 state legislatures across the nation in response to the Supreme Court gay marriage ruling, UCLA law professor Douglas NeJaime testified before Reeves last week.