WILLIAMSTOWN, Ky. (RNS) Ken Ham sees a parallel between the time of Noah in the biblical book of Genesis and today’s growing secularization of American culture.

So perhaps it makes sense that Ham’s Christian apologetics ministry, Answers in Genesis, has built an ark 510 feet long, 85 feet wide and 51 feet high, based on the cubit measurements God gave Noah in the biblical flood account.

But while only eight people in Noah’s family climbed aboard the biblical ark, when the rain began to fall, on Tuesday (July 5) as if on cue, more than 8,000 people got a first look inside the full-scale replica at the Ark Encounter. A young visitor observes an exhibit titled “Fairy Tale Ark” aboard the full-scale Noah’s Ark replica at the Ark Encounter during a preview of the park on July 5, 2016, in Williamstown, Ky. The exhibit displays toys and books recounting the biblical flood account as a children’s story alongside the words, circled by a snake representing Satan, “If I can convince you that the flood was not real, then I can convince you that heaven and hell are not real.” RNS photo by Emily McFarlan Miller

The ark and 800-acre theme park officially opens to the public Thursday in northern Kentucky, 45 minutes from Answers in Genesis’ Creation Museum.

Ham called the Ark Encounter’s opening “a historic event in Christendom” at the ribbon-cutting and preview Tuesday and predicted it would become “one of the greatest Christian outreaches of this era of history.”

The park’s centerpiece features three decks of exhibits explaining Answers in Genesis’ views of the biblical flood account and life-size figures depicting what life on the ark might have been like for Noah and his family — an extravaganza Ham described as “beyond Hollywood.”

The park also features a two-story restaurant, aerial zipline cables and the Ararat Ridge Zoo with goats, ponies, emus and more animals. The next phase of park construction likely will include a walled city “that takes you back to Noah’s day” with shops, restaurants and street performers that visitors will walk through as they approach the ark, said Michael Zovath, chief action officer for Answers in Genesis and project director for the Ark Encounter.

But the Ark Encounter is “not just for entertainment,” said Ham, president and CEO of Answers in Genesis. 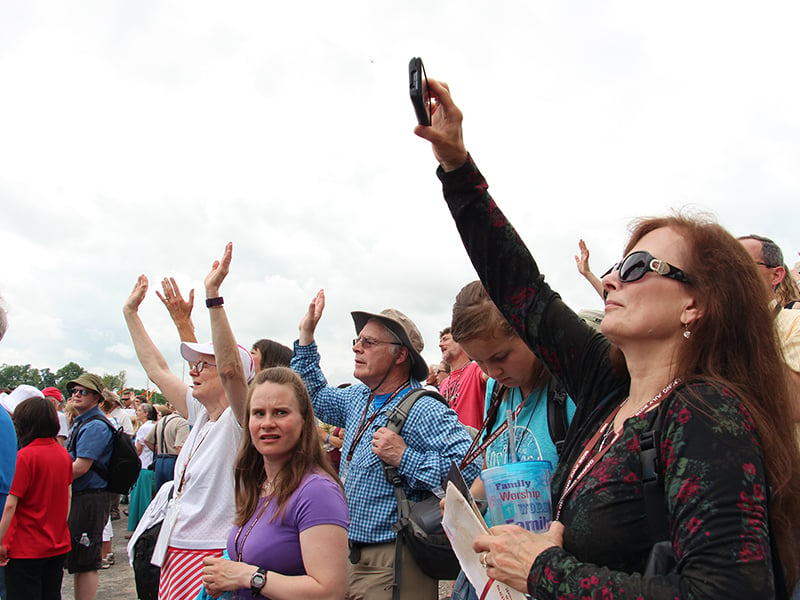 Supporters worship and take photos during a ribbon-cutting event at the Ark Encounter on July 5, 2016, in Williamstown, Ky. RNS photo by Emily McFarlan Miller

It’s to “proclaim God’s word and the gospel,” he said. It’s meant to show — in keeping with Answers in Genesis’ ministry, focused on issues such as creation, evolution, science and the age of the Earth — that the biblical flood account is historic and the Bible is true in regard to history and science.

“When people say, ‘What are you really doing here? What statement are you making?,’ well, you know, in a world that we see becoming very secularized before our eyes, it’s really time for Christians to do something of this size, of this quality, that competes with the Disneys and the Universals to get a message to the world,” he said.

That’s a mission and an interpretation of Scripture that the park’s first visitors celebrated at the preview event Tuesday, but it’s also a retelling critics call inaccurate at best and potentially harmful at worst.

“We share with the people at the Ark Encounter a belief in the Bible, but Answers in Genesis and Ken Ham do not speak for all Christians,” said Deborah Haarsma, president of BioLogos, a Christian ministry promoting an evolutionary understanding of creation. 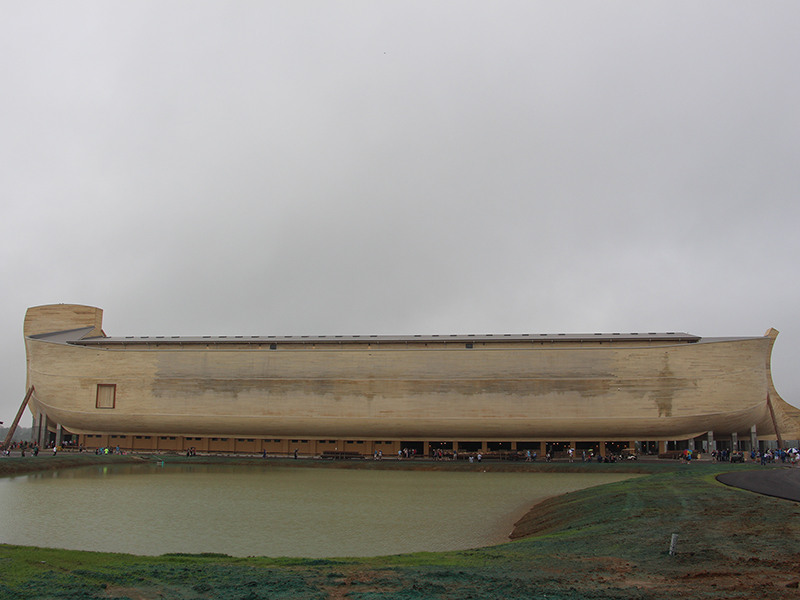 The full-scale Noah’s Ark replica at the Ark Encounter during a preview of the park on July 5, 2016, in Williamstown, Ky. At 510 feet long, 85 feet wide and 51 feet high, based on the measurements in cubits found in the first few chapters of Genesis, the ark is the largest timber-frame structure in the world, according to the Ark Encounter. RNS photo by Emily McFarlan Miller

The park’s opening day — 7/7 — was chosen because Genesis 7:7 reads, “And Noah and his sons and his wife and his sons’ wives entered the ark to escape the waters of the flood.”

Employees have been working six days a week since April to finish by that date, Zovath said. There still is lighting and animal sculptures (eventually, the ark will hold 200) to finish, and the animal sounds and music that boom through the wooden structure have not yet been finalized, according to Patrick Marsh, vice president of attractions for the Ark Encounter.

That timeline isn’t the only challenge the park has faced: In 2014, the theme park was awarded, then denied Kentucky tax incentives, worth an estimated $18 million over 10 years, because Answers in Genesis requires its employees to sign a statement of belief. In January, it won a lawsuit to have those incentives restored.

The first phase of construction on the park cost $100 million (total costs will reach more than $150 million), funded through bonds and $33 million in private donations, according to Ham. Critics have balked at its use of taxpayer funds, but the Answers in Genesis president is adamant none were used for construction; rather, he said, those incentives will come as rebates on sales tax generated by the park now that it’s opened.

During a press conference ringed by cheering supporters, Ham said he believed the park was being singled out because of prejudice against Christians.

Tri-State Freethinkers, an area group advocating the separation of church and state, plans to picket the park’s opening for its “anti-science” mission and “discriminatory hiring practices,” as well as what the group calls the immorality of the biblical flood account, according to its website. 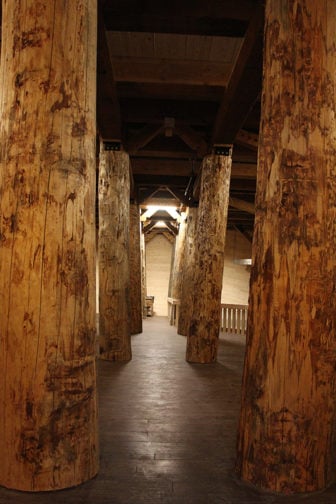 Inside the full-scale Noah’s Ark replica at the Ark Encounter during a preview of the park on July 5, 2016, in Williamstown, Ky. The building is the largest free-standing timber frame structure in the world, according to the Ark Encounter. RNS photo by Emily McFarlan Miller

And not all share the ministry’s beliefs — sometimes referred to as “young Earth creationism” — that the Earth is about 6,000 years old, that humans once lived alongside dinosaurs and that the six-day creation and flood accounts found in the first 10 chapters of Genesis are literally, historically true.

That reading of Genesis is important because, Ham said, “When you take away the foundation of the absolute authority of the word of God, then anything goes. … In other words, who draws the line?”

A 2015 study by the Pew Research Center found that 65 percent of Americans believe humans have evolved over time. That number jumps to 98 percent among members of the American Association for the Advancement of Science, it said.

Those scientists say that the Earth is over 4 billion years old, that there never was a flood covering the whole Earth and that the variety of species today could not have descended from the animals on the ark. (Ham maintains that up to 1,400 “kinds” of animals were brought aboard the ark, with changes within those kinds over time leading to the diversity of animals we see today.)

On the ark’s third deck, a sign in an exhibit about the ice age points out that creationists and evolutionists look at the same evidence and draw different conclusions. The sign explains the difference between “the evolutionary worldview” and “the biblical worldview.”

But there’s more than one “biblical” worldview, say Susan L. Trollinger and William Vance Trollinger Jr., professors at the University of Dayton and co-authors of the book “Righting America at the Creation Museum.” Life-size figures of Noah’s son Japheth and his wife “Rayneh,” who is not named in the Bible, show what life may have been like on Noah’s Ark in the living quarters of the full-scale replica at the Ark Encounter, during a preview of the park on July 5, 2016, in Williamstown, Ky. RNS photo by Emily McFarlan Miller

“Young Earth creationism holds sway in fundamentalism and in a good part of evangelicalism,” said William Vance Trollinger Jr. But it was popularized among Christians in 1961 with the publication of “The Genesis Flood” by the late Henry Morris and by John Whitcomb, who attended Tuesday’s ribbon-cutting.

Haarsma said she worries Answers in Genesis builds an atmosphere in which Christians feel they have to choose between Bible and science, between belief in God and the natural world. While Ham points to anecdotes of people turning to faith after confronting the evidence from Answers in Genesis, Haarsma said BioLogos has stories of people turning away after confronting evidence to the contrary.

“We see the natural world as God’s creation, so we can celebrate the Big Bang and evolution as discoveries about how God created this world,” she said. 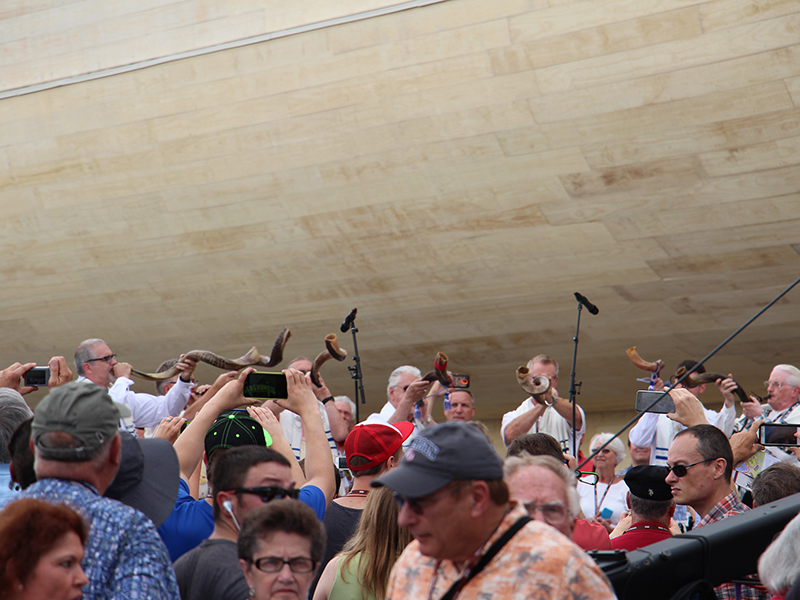 Supporters watch on the big screen as several men blow shofars at the foot of the full-scale replica of Noah’s Ark during a ribbon-cutting event at the Ark Encounter on July 5, 2016, in Williamstown, Ky. RNS photo by Emily McFarlan Miller

But those at Tuesday’s ribbon-cutting and park preview — accompanied by hymns, shofar blasts and a marching band — were either members of the media or supporters who had donated toward the construction of the Ark Encounter.

America’s Research Group estimated the park could attract up to 2.2 million visitors in its first year, perhaps doubling attendance at its sister attraction, the Creation Museum. ARG’s research also indicates more than 40 percent of those visitors may not even be Christians.

“Even if they don’t share our biblical view,” Ham said, “they can’t help but be impressed by the structure, the craftsmanship, the attention to detail in the world-class exhibits inside. And — who knows? — maybe they’ll be challenged to even talk about the Bible as we do.” 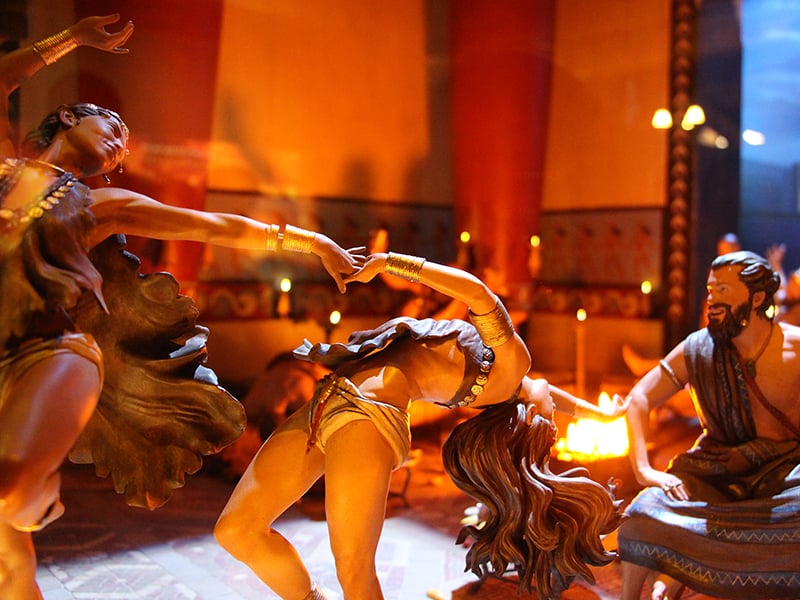 A diorama in the exhibit on the “Pre-Flood World” aboard the full-scale replica at the Ark Encounter imagines the “descent into darkness” of society in Noah’s time that led God to judge the world with a flood in the biblical flood account during a preview of the park on July 5, 2016, in Williamstown, Ky. RNS photo by Emily McFarlan Miller

The animal sculptures were a hit with Michigan couple Holger and Lindsey Spiewak’s seven children. They especially liked the dinosaurs, they said.

The Spiewak family has been following the ark’s construction for the past seven years, Lindsey Spiewak said, but “to see it come to life and be real life is amazing.”

“We came up on the hill where the ark was sitting,” she said. “It just took my breath away, and I had tears in my eyes because, wow, this was real. It’s a piece of history. I just think it’s so cool.” Ark Encounter donors Steven and Veronica Gutierrez and their daughter, Apphia, traveled from California to attend a preview of the park on July 5, 2016, in Williamstown, Ky. RNS photo by Emily McFarlan Miller

Steven Gutierrez, who came to the park from California with his wife, Veronica, and their young daughter, Apphia, said he first had discovered Answers in Genesis’ ministry a few months after becoming a Christian. Gutierrez, who had lots of questions, found its resources helpful, and he said he hoped the exhibits aboard the ark also would help others.

“If there are people who are skeptical and confused,” he said, “a lot of their questions could be answered just by walking through the exhibits.” 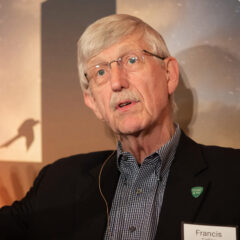 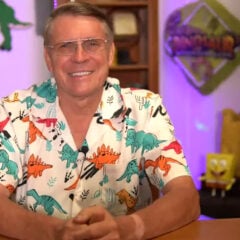