PHILADELPHIA (RNS) Standing outside the historic Mother Bethel African Methodist Episcopal Church, Yvonne Studevan was full of pride as she saw her great-great-great-great-grandfather being honored with a new, 6-foot bronze statue.

“We’re a denomination that a man had a vision for that was so strong because he had the right vision of serving God: love God, serve God, love God’s people,” the Athens, Ga., woman said of Richard Allen, who started the nation’s first independent black denomination. Detail from The Bishops of the A.M.E. Church, 1876, Lithograph. Courtesy of the Library Company of Philadelphia, gift of Roger Stoddard in honor of Edwin Wolf II

Just as their religious ancestors did exactly two centuries ago, members of the AME Church made a pilgrimage to Philadelphia on Wednesday (July 6) for the opening of the denomination’s General Conference.

They gathered not only to remember their history, but to continue to forge a path toward racial justice.

Allen started Bethel AME Church in 1791 after watching white officials of St. George’s Methodist Episcopal Church pull up his friend, clergyman Absalom Jones, who was praying on his knees. Bishop Gregory Ingram, host bishop of the bicentennial celebration of the African Methodist Episcopal Church, spoke at the the bicentennial banquet hosted by the First Episcopal District of the AME Church on July 5, 2016, the eve of the denomination’s 50th quadrennial General Conference in Philadelphia. RNS photo by Adelle M. Banks

“We’ve been talking about Black Lives Matter since the AME Church started, not just now,” said the Rev. Gregory Ingram, host bishop for the quadrennial General Conference and leader of the AME Church’s First Episcopal District, in an interview.

At a bicentennial banquet Tuesday that kicked off the conference, the Rev. Mark Tyler, the pastor of Bethel AME, told 3,000 attendees they have much to celebrate.

“We gather tonight to give God praise — praise for keeping, protecting and expanding the freedom church birthed in a blacksmith shop, having come out of segregated pews but now standing on five continents,” he said at the Pennsylvania Convention Center.

As the festivities for the General Conference began with AMEs decked in tuxes and sequined gowns, speakers recalled their humbler beginnings, when delegates arrived on horseback from Delaware, New York and Maryland. 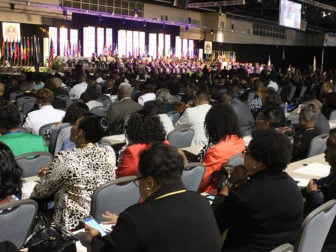 “We had to fight all the way to high court,” she said of the battle that was resolved by the Pennsylvania Supreme Court. “The Methodist Episcopal Church resisted an independent black denomination.”

An exhibit at the Pennsylvania Academy of the Fine Arts showcased other successful efforts to counter discrimination and segregation over the years, including a photo of bishops praying in front of the Supreme Court for a favorable ruling in the 1954  Brown v. Board of Education case that ended legal segregation in U.S. schools.

But the joy and pride that the AMEs spoke of as they reunited was tempered with a reminder that the denomination’s work for racial justice continues.

“We stand tonight, looking back at an extraordinary history, but we also remember that we had some pain along the way, even in our recent history,” said the Rev. Leslie Tyler, another leader at Bethel AME, before listing the names of nine members of Mother Emanuel AME in Charleston, S.C., gunned down by an alleged racist during a Bible study just over a year ago. Plaque honoring the nine worshippers killed during a Bible study in June 2015 at Mother Emanuel African Methodist Episcopal Church in Charleston, S.C. It is included in the courtyard of a bronze statue of Richard Allen, founder of the AME Church, in Philadelphia, that was unveiled in July 2016. RNS photo by Adelle M. Banks

A section of the courtyard surrounding the Allen statue includes plaques paying tribute to the nine victims: “May the untimely deaths of these three men and six women be an eternal reminder of the power of love and forgiveness, and that God’s grace is sufficient, no matter what.”

RELATED STORY: A year after the Charleston church shooting, what has changed?

Bishop Reginald Jackson, chair of the church’s Social Action Commission, said the expressions of forgiveness by some of the victims’ relatives lifted the nation but the tragedy highlighted the need to do more to address racism.

“Racism to this day still remains a major problem in the United States,” he said. “It’s one the country wants to live in denial about, but the reality is that liberty and justice for all is still not a reality.”

Even as the AMEs focused on their 200-year history, one bishop suggested its members go back even further. 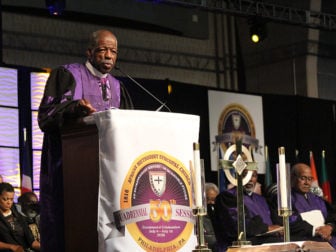 Bishop Theodore Larry Kirkland, in the quadrennial sermon, urged more teaching about the Bible from the denomination’s pulpits to increase biblical literacy and reduce “lethargic pulpits” and “a lack of spiritual growth in our pews.”

The 2.5 million-member denomination has grown from 16 delegates at its first meeting to 1,506 today. Translation booths — for Spanish, French and Portuguese — were positioned in the back of the convention hall, reflecting the international membership that includes churches in Africa, the Caribbean, Europe and Asia.

As the meeting began, attendees made their way to Mother Bethel, where they could see both the new statue and the old tomb of Allen, who died in 1831. The tomb of Richard Allen, founder of the African Methodist Episcopal Church, is located in the Richard Allen Museum of Mother Bethel AME Church in Philadelphia. RNS photo by Adelle M. Banks

“It just dignifies us as a race, as a people because some people today — Donald Trump — Did I say his name? … sometimes they still devalue black people,” the 72-year-old woman said. “Some of the issues that Richard Allen faced, we’re still facing today.” The retired school administrator hoped the fresh look at the denomination’s history may help pass the story along to the younger generation of AMEs. Within minutes of her expressing that hope, a tour guide recounted to a group of teenagers how the walkout from one church led to the creation of their denomination.

“It just makes me realize how far we’ve come and how far we could go,” said Daja Williams, 17, a member of an AME church in Nashville, Tenn., who stopped at the statue and took in the tour. “And just made me appreciate our ancestors and how much they’ve done for us.”