(RNS) Richard Allen, the first bishop of the African Methodist Episcopal Church, will be honored with a U.S. postage stamp commemorating his leadership of the historically black denomination founded 200 years ago.

The U.S. Postal Service called the preacher and activist “an inspiring figure whose life and work resonate profoundly in American history.”

The new stamp will be featured in a ceremony Tuesday (Feb. 2) at Mother Bethel African Methodist Episcopal Church in Philadelphia. It becomes the 39th stamp in the Black Heritage series after more than 40,000 people petitioned the postal service for its creation.

The art for the stamp is a detail of Allen’s portrait from an 1876 print, “Bishops of the A.M.E. Church,” from the collection of the Library Company of Philadelphia.

Here are five facts about Allen:

1. He founded the AME Church after worship of blacks was restricted.

“The unwillingness of the Methodists to accept the independent leadership of black preachers like Allen and the institution of segregated seating led Allen and Jones to found independent black churches,” said American religious historian Albert J. Raboteau. 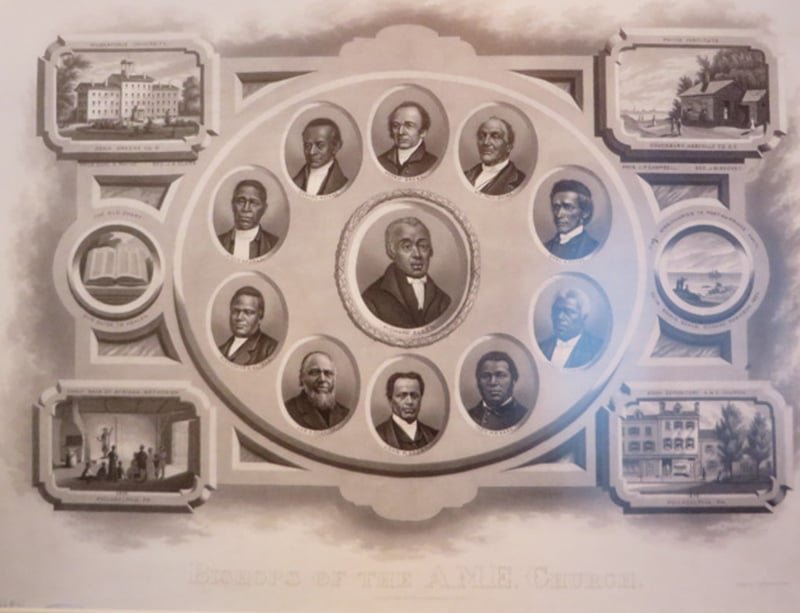 This image of the early bishops of the African Methodist Episcopal Church was featured at an exhibit at the Library of Congress that closed on Jan. 2, 2016. Richard Allen, the first bishop, is in the center of the image. Religion News Service photo by Adelle M. Banks

2. He aided in the conversion of his slavemaster.

Once converted himself, Allen played a role in the conversion of Stokeley Sturgis, a Delaware man who owned him.

After Sturgis was converted, and Allen had paid for his freedom, the former slave gave his former slavemaster “a gift of eighteen bushels of salt … in consideration ‘of the uncommon kind Treatment of his Master during his servitude.’”

Jarena Lee, a member of Bethel AME Church, was allowed to preach eight years after she first requested it. Allen helped make her work as a traveling preacher possible. Dickerson wrote: “When Lee traveled as an evangelist, Allen and his second wife, Sarah Allen, took care of Lee’s son.”

4. He was a successful businessman.

Allen worked throughout his ministry so he did not need to depend on his congregation for support.

“Though born in bondage, Allen prospered enough (as owner of blacksmithing, shoemaking and chimney-sweeping businesses) to buy several income properties,” wrote Raboteau in “A Fire in the Bones: Reflections on African-American Religious History.”

Before he started the AME Church, Allen was instrumental in founding the Free African Society, which helped newly freed blacks develop leadership skills. He also founded an organization that promoted the education of black schoolchildren.

“The birth of strong black institutions is a part of his legacy,” said the Rev. Robert M. Franklin, a leadership and black church expert at Emory University. “This is long before any of the black college movement emerges.”