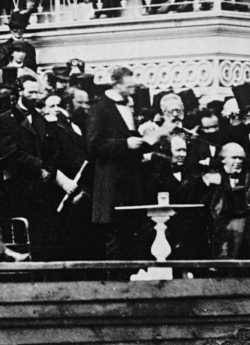 A week and a half after delivering his second inaugural address, Abraham Lincoln replied to a complimentary note from the leader of the Republican Party in New York by acknowledging that, even though he expected it “to wear as well as — perhaps better than — anything I have produced,” it was “not immediately popular.”

Men are not flattered by being shown that there has been a difference of purpose between the Almighty and them. To deny it, however, in this case, is to deny that there is a God governing the world. It is a truth which I thought needed to be told; and as whatever of humiliation there is in it, falls most directly on myself, I thought others might afford for me to tell it.

With victory in the Civil War all but assured, Lincoln had not claimed, a la the “Battle Hymn of the Republic,” that God was with the Union. Rather, in some of the most powerful lines in American history, he declared:

If we shall suppose that American slavery is one of those offenses which, in the providence of God, must needs come, but which, having continued through His appointed time, He now wills to remove, and that He gives to both North and South this terrible war as the woe due to those by whom the offense came, shall we discern therein any departure from those divine attributes which the believers in a living God always ascribe to Him? Fondly do we hope, fervently do we pray, that this mighty scourge of war may speedily pass away. Yet, if God wills that it continue until all the wealth piled by the bondsman’s two hundred and fifty years of unrequited toil shall be sunk, and until every drop of blood drawn with the lash shall be paid by another drawn with the sword, as was said three thousand years ago, so still it must be said “the judgments of the Lord are true and righteous altogether.”

Addressing the memorial service for the five murdered policemen in Dallas yesterday, Barack Obama made it his business to acknowledge the distress, and the shortcomings, of both law enforcement and the African American community it has too often abused. But where Lincoln had focused, via Psalm 19, on God’s judgment, Obama, amidst the latest tragedies in the history of American race relations, quoted a New Testament passage on God’s mercy, from Paul’s Letter to the Romans: “We also glory in our sufferings, because we know that suffering produces perseverance; perseverance, character; and character, hope.”

For Paul, it was God’s grace through Christ’s sacrifice for sinful humanity that made hope possible. Obama, speaking of less ultimate things, claimed to see it in the American people. “We are not as divided as we seem,” he insisted.

I know we’ll make it because of what I’ve experienced in my own life, what I’ve seen of this country and its people — their goodness and decency — as President of the United States. And I know it because of what we’ve seen here in Dallas — how all of you, out of great suffering, have shown us the meaning of perseverance and character, and hope.

If Obama did not rise to Lincoln’s eloquence, his balanced, inclusive message met the needs of the moment. Negative reaction was limited. As befits our more secular age, the theological notes were more muted. But they sounded clearly enough. Just as God’s judgments are true and righteous, Paul also had it right. Suffering can lead to hope.