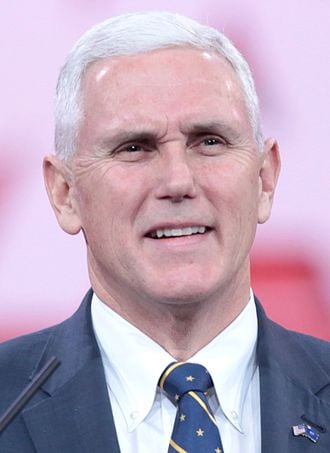 Here we go again. In 2000, George Bush declined to say he was a Methodist. In 2008, Sarah Palin refused to acknowledge her pentecostalism. By all accounts, Mike Pence is at least as committed an evangelical as they are, and like them, he’s hiding his affiliation under a bushel.

As traced by Indiana free-lancer Craig Fehrman. Pence’s religious trajectory began with an Irish Catholic boyhood and proceeded to an evangelical religious experience in college that led him to call himself “an evangelical Catholic.” By the mid-1990s, the Catholic side had receded and he joined Grace Evangelical Church in Indianapolis, a mega-church affiliated with the Evangelical Free Church of America (a small Baptist denomination with roots in the Scandinavian free church movement).

Serving six terms in Congress beginning in 2001, Pence was the compleat evangelical warrior. He kept his Bible handy to consult on matters of public policy and became a paladin of the pro-life cause. Nothing, he claimed, was more important than his faith.

But after being elected governor of Indiana in 2012, he suddenly became reticent. He told Fehrman his family was “looking for a church.” It’s not known whether they ever found one.

Fehrman attributes the reticence to political calculation: “as his political ambitions grew his public religiosity needed to shrink.” But that’s not a problem in contemporary evangelicalism. It’s enough to call yourself, as Pence did when accepting Donald Trump’s offer to be his running mate, “a Christian, a conservative, and a Republican — in that order.”

Two hundred years ago, some American Protestants began calling themselves  “Christians” in hopes of doing away with denominationalism and restoring the early church. (One of the, well, denominations they established, the Disciples of Christ, now has its headquarters in Indianapolis.) The non-denominational nomenclature that many evangelical churches adopt these days (East Cupcake First Baptist Church > The Community Church of East Cupcake) amounts to a revival of this impulse. Pence does not lack for co-religionists who just want to be called Christians.

When Dwight Eisenhower had himself baptized into the Presbyterian Church after assuming the presidency in 1953, Americans considered it a good thing for politicians to have a clear denominational identity. Today, not so much.