VATICAN CITY (RNS) The Vatican’s finance minister, Cardinal George Pell, has strenuously rejected the latest claims that he sexually abused children many years ago as a priest.

Pell — an Australian who is third in the Vatican hierarchy, after Pope Francis and Secretary of State Pietro Parolin — is the most senior figure in the Catholic Church to be accused of sexually abusing minors.

“The allegations are untrue. I deny them absolutely,” 75-year-old Pell told journalists in Rome on Thursday (July 28).

This week, a TV report by the Australian Broadcasting Corp. said police in the state of Victoria were investigating claims that Pell had touched boys inappropriately and, in a separate incident, appeared naked in front of three boys at a surfing club locker room in the late 1980s.

“Untested allegations should be put through the proper procedures,” Pell said. “I’m quite prepared to cooperate. … I won’t cooperate with trial by the media. I think it’s unjust and inappropriate.”

After an internal church investigation, Pell, the former archbishop of Sydney, was cleared of an allegation that he had abused a 12-year-old boy at a camp in the 1960s.

The Vatican declined to comment on the latest claims by the Australian national broadcaster. 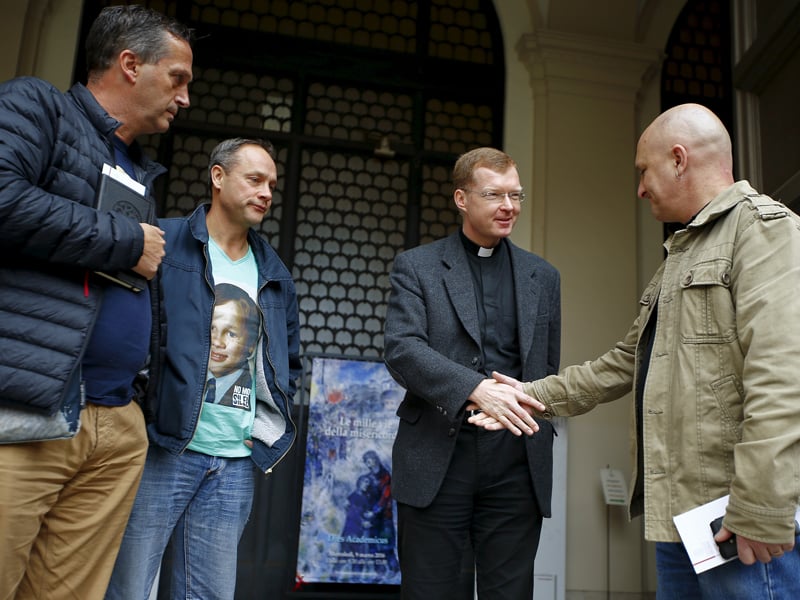 The Rev. Hans Zollner, second from right, greets Andrew Collins, right; David Riddle, left; and Peter Blenkiron, second from left, who said they were child sex abuse victims, at the end of a meeting at the Pontifical Gregorian University in Rome on March 3, 2016. Cardinal George Pell has said he should have done more to stop the sexual abuse of children in the Catholic Church, acknowledging that he was told of at least one priest “misbehaving” with boys at an Australian school. Photo courtesy of REUTERS/Tony Gentile

The abuse survivors group SNAP urged anyone “with suspicions or knowledge” of any alleged wrongdoing by Pell to speak to secular authorities, not church figures.

“After a lengthy investigation, police have deemed eight accusers’ accounts are credible enough that they’re giving the evidence to prosecutors,” said David Clohessy, SNAP president, in a statement. “That speaks volumes.”

Anthony Fisher, the archbishop of Sydney, told reporters the claims did not correspond with the Pell he knew.

“He has a record of leadership in the fight against child sexual abuse, and was the first bishop in the world to implement a process under which such claims would be investigated by an independent commissioner,” Fisher said.

Pell has wielded significant power since he was appointed prefect of the secretariat for the economy by Pope Francis in 2014.

Pell has long been accused of shielding predatory priests in Australia. Earlier this year he gave lengthy evidence by video link to an Australian inquiry into clerical sexual abuse from Rome after doctors said he was not well enough to testify in Sydney.

At the end of his hearing, Vatican spokesman the Rev. Federico Lombardi praised Pell for his “dignified and coherent” testimony.