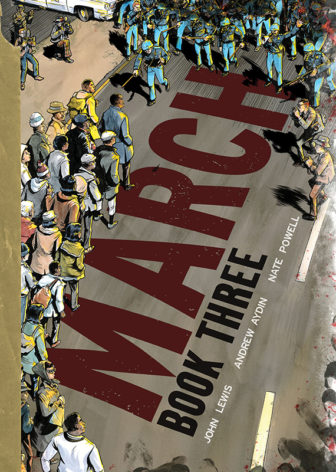 Q: Representative Lewis, in an earlier book of this series we read that you were asked by church leaders to tone down your speech at the 1963 March on Washington. How does “March: Book Three” deal with issues of faith?

Q: The book series often talks about how prayers and hymns were used ahead of and during the civil rights marches. What difference did they make for you personally?

Lewis: The prayers, the songs, the hymns fortified me, made me stronger, gave me the power and the ability, the capacity to keep moving, to pick ’em up and put ’em down. If it hadn’t been for my belief in God Almighty, the civil rights movement and my own participation would have been like a bird without wings. 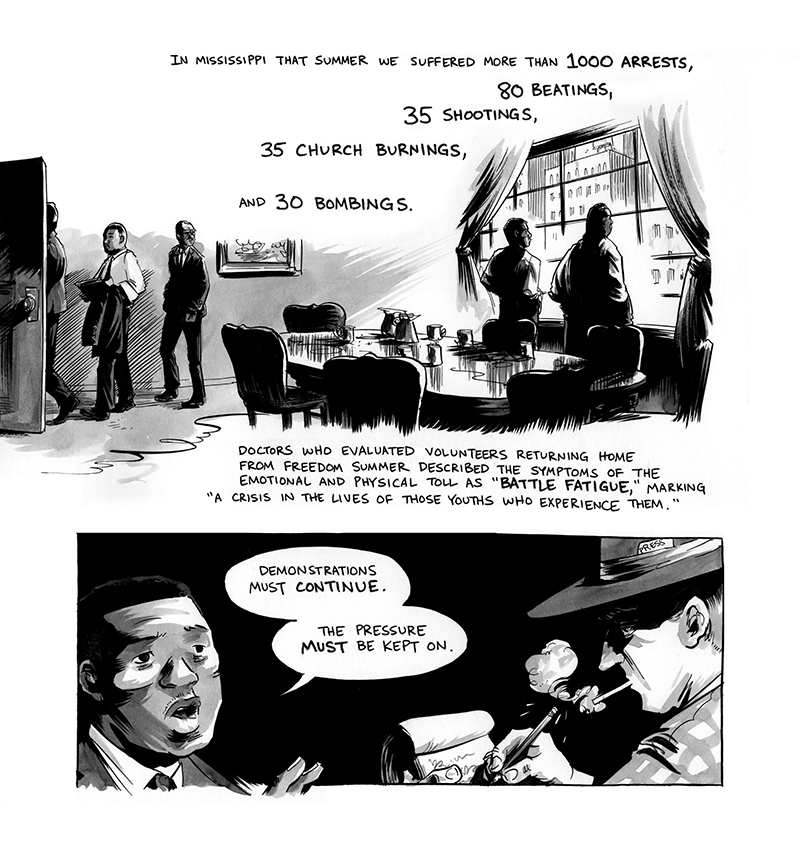 Aydin: “March” in general and “March: Book Three” specifically showed what an important role the church played in giving the movement a home from which to organize. Setting out from Brown Chapel (African Methodist Episcopal Church) in Selma or the bombing of the 16th Street Baptist Church and the fallout from entering the house of the Lord with violence, I think in many ways set up an important contrast between the dignity of the marchers and the organizers and the violence and chaos and disorder brought by those who were attacking them.

Q: How did a comic book published in 1957 by the nonviolence group Fellowship of Reconciliation about the Rev. Martin Luther King Jr. help lead to the creation of this series?

Aydin: Congressman Lewis first told me about that comic book when I was working on his campaign and he told me what an important role it played during the civil rights movement. I just started asking the congressman, “This first comic book was called ‘Martin Luther King and the Montgomery Story’ and it told the story of the Montgomery bus boycott. So with that having been done in comic form, why couldn’t we do the rest of the movement in comic book form?” Martin Luther King had edited that comic book himself. And we used it as proof of the concept that “March” could work.

Q: Artist Nate Powell, the back cover of “Book Two” depicts a view of the 16th Street Baptist Church in Birmingham, Ala. Can you describe it and why you chose that particular image?

Powell: This is one of these occasional moments during the process of creating “March” where it’s the kind of stuff you can’t even make up or write into a narrative. The back cover image is also essentially the last page of the book. It’s a close-up of a blown-out stained glass window from 16th Street Baptist and when the church was bombed in September of ’63 virtually all the windows were blown out and on the one side only the center window remained. But only the face of Jesus is blown out in that particular stained glass window. I’ve gotten flak; we’ve also gotten a lot of praise. It’s a shocking, harrowing, amazing image.

Q: Representative Lewis, how do you compare religious involvement in voting efforts today to the work you started more than 50 years ago?

Lewis: More than 50 years ago the religious communities, the churches, the synagogues responded to the pain, to the hurt, to the cry for people, primarily in the American South, where people could not register to vote simply because of the color of their skin.

And today the church has a role to play, a great role to play. The vote is precious. It’s almost sacred. It is the most powerful nonviolent instrument or tool we have in a democratic society. I’ve heard other religious leaders say that the church must be a headlight and not a taillight.
There are systemic attempts today to take us back to the days before Selma, and the church must — when I say the church I mean the temples, the mosques, the religious community — must lead people. The religious community must get what I call in good trouble, necessary trouble.

Q: Representative Lewis, you were a seminary student when you got involved in the civil rights movement. Do you ever regret not sticking with the ministry, at least in the traditional sense?

A: No, I do not regret, not at all. I think my pulpit today is a much larger pulpit. If I had stayed in a traditional church, I would have been limited to four walls and probably in some place in Alabama or in Nashville, Tenn. I preach every day. Every day, I’m preaching a sermon, telling people to get off their butts and do something.