(RNS) The Olympic Games are a secular endeavor, but religion is everywhere, if you know where to look. For example, athletes who are religious may say a little extra prayer to St. Sebastian, the patron saint of athletes and of the host city of Rio de Janeiro. Who was St. Sebastian and how did he come to be the symbol of both? Let us ‘Splain …

Q: Who was the real St. Sebastian?

A: It’s tough to pin down the historical Sebastian because he lived in the third century. We know he was from the area around Milan, Italy, and was an early Christian. He is buried somewhere along the Appian Way, the great stone-paved Roman road that can still be traveled, most likely near or in the spot now occupied by the Basilica of St. Sebastian.

His story, first recorded by St. Ambrose, goes like this: Sebastian was deeply upset by Emperor Diocletian’s persecution of Christians, so he joined the Roman army to help them from within. He hid his Christianity and became a member of the elite Praetorian Guard.

When Sebastian’s Christianity was discovered, Diocletian took a special interest in his punishment. He ordered Sebastian bound to a stake in a field, where a phalanx of archers shot him full of arrows. Ambrose described him as looking like a sea urchin, and dozens of artists have depicted the saint like a pincushion.

Fun Fact: Because lots of artists have depicted St. Sebastian as a shirtless beefcake, he is popular as a gay icon.

But Irene of Rome, the widow of another Christian martyr, crept into the field at night to recover Sebastian’s body, and she found him alive. She took him home and nursed him back to health. 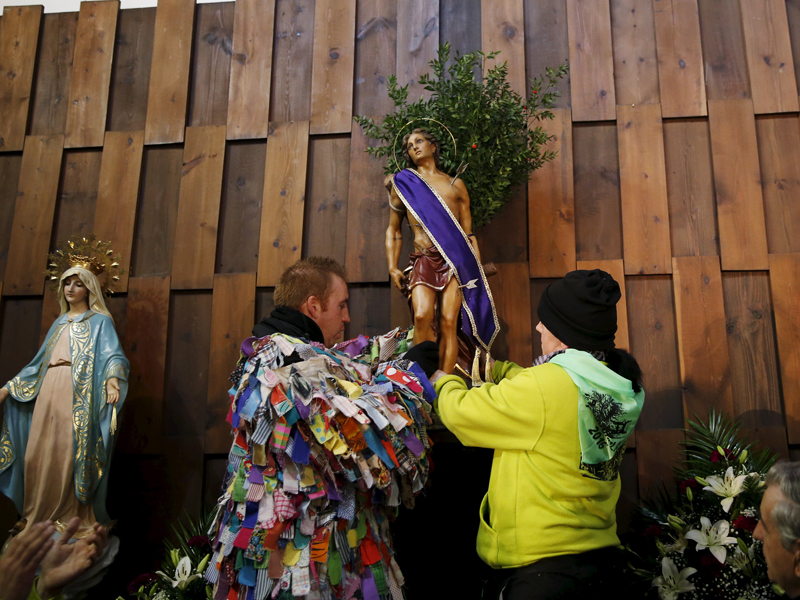 Jarramplas Armando Vicente Vicente, 30, and his sister Laura place a statue of St. Sebastian at the altar during the Jarramplas traditional festival in Piornal, southwestern Spain, on Jan. 20, 2016. Photo courtesy of REUTERS/Susana Vera

Q: And they lived happily ever after, right?

A: Wrong. The recovered Sebastian waited for Diocletian in the streets of Rome and upbraided him for his cruelty to Christians. The emperor was not amused and ordered his guards to beat Sebastian with clubs and dump his body in a public sewer, where he died.

Q: If Sebastian was beaten and overcome, why is he the patron saint of athletes?

A: Because of his great physical strength and endurance in overcoming the attacks on his body to personally confront a more powerful opponent in the emperor. Yes, he went down, but he went down giving it all for his faith. Ray McKenna, president of Catholic Athletes for Christ, says Sebastian reminds us of an important element of both sport and Christianity — suffering.

“Athletes can relate to St. Sebastian,” McKenna said. “They say, ‘If he can endure that, I can go the extra mile.'”

Today, some athletes wear St. Sebastian medals, carry St. Sebastian rosaries or prayer cards and recite one or more of several prayers dedicated to the saint. Here’s one:

“St. Sebastian, patron saint of athletes and sports, help me to do the best that I can, aim high and always give it my best effort, and if I should fail, give me the strength to try harder. Amen.”

Q: How did Sebastian become the patron saint of Rio de Janeiro? Was that something the city adopted after it was awarded the 2016 Olympic Games?

A: Catholics believe saints act as their advocates with God. So it is very common for Catholic organizations, groups and individuals to adopt a patron saint. Cities — especially those founded by the Catholic monarchies of Spain and Portugal in Latin America — are no exception. Rio was founded by the Portuguese in 1565 and named for St. Sebastian, the patron saint of their monarch, Dom Sebastiao. The city’s full name is Sao Sebastiao do Rio de Janeiro (Portuguese for “St. Sebastian of the January River”), and today the saint’s name and image can be found all over the city of 6.5 million. His name and image grace Catedral Metropolitana de São Sebastião, the city’s main cathedral, the seat of the Roman Catholic Church in the Brazilian state of Rio de Janeiro, and is embedded in the city’s coat of arms in the form of three arrows.

Q: And the big statue with the outstretched arms that stands above the harbor, that’s St. Sebastian, right?

A: Nope. That’s Christ the Redeemer and it was built in 1931 atop Mount Corcovado. At its base sits a little chapel dedicated to the patron saint of all Brazil, Our Lady of Aparecida.

Religion Hub
Not everyone cheered the ancient Olympic games, but the sacred games brought together rival societies
Follow us on Facebook!
Submit your photos to RNS