(RNS) When Team USA members David Boudia and Steele Johnson emerged simultaneously crying and smiling from their final dive Monday (Aug. 8) at the Rio Olympics, the silver medal in men’s synchronized platform diving was theirs.

But the glory, both men said minutes later, belonged to someone else.

“We both know our identity is in Christ,” Boudia, 26, told NBC. Johnson, 20, added, “Going into this event knowing that my identity is rooted in Christ and not the result of this competition just gave me peace. And it let me enjoy the contest. God’s given us a cool opportunity, and I’m glad I could come away with an Olympic silver medal.”

In terms of religion, the 554 athletes of Team USA are a cross-section of the nation they represent, with Catholic, Jewish, Protestant, Buddhist and Muslim members, among others. It also has members who — like 23 percent of Americans — are unaffiliated with any religion and who, perhaps like 7 percent of Americans, say they do not believe in God or are agnostic.

But Boudia’s and Johnson’s remarks raise a question: Does religious faith give an athlete any sort of edge?

It depends on whom you ask — and how you ask. Athletes commonly speak of the support faith gives them; tennis player Serena Williams, golfer Bubba Watson, quarterback Tim Tebow, pitcher Curt Schilling, retired NFL coach Tony Dungy and the late Muhammad Ali are only the best-known among them.

But athletes define that support in different ways. For some, it is the feeling of not being alone on the field of competition. For others, it is a sense that the outcome — whatever it is — is for the best. And once in a while, someone says God “wants” them to win.

“If there is an advantage these guys would tell you it gives them, it is in dealing with the ups and downs of training and injury, of winning and losing,” said Chad Bonham, an Oklahoma-based writer who interviewed scores of Christian athletes for his book “Glory of the Games: Biblical Insights From the World’s Greatest Athletes.”

“Winning can be a drug, an upper, and losing is a downer, so it helps give them an edge in dealing with the glory they receive from winning and the awful feeling of losing. There is a certain balance in those people in that they understand what they are doing and what is happening to them.” 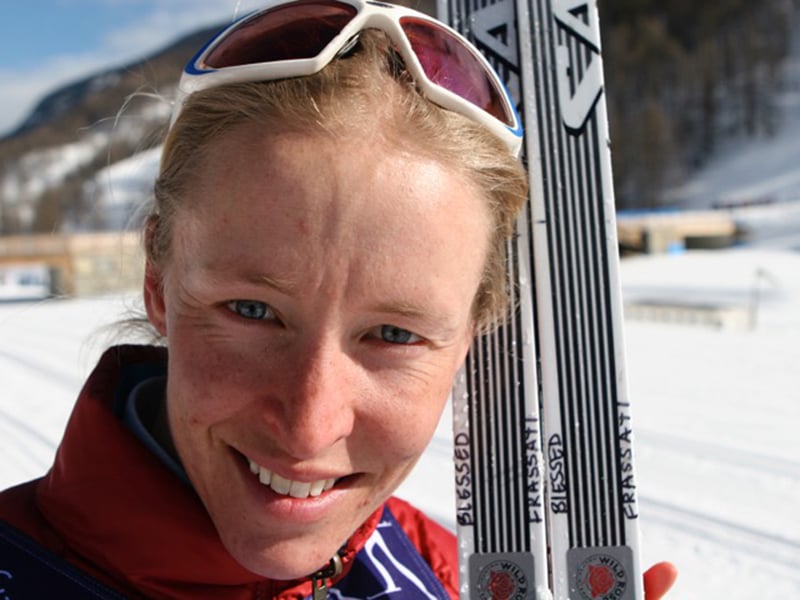 Dussault painted “Blessed Frassati” across her skis, a tribute to an early 20th-century Italian Catholic skier dedicated to the poor and the sick who is on track for sainthood and whom she adopted as her patron saint. Photo courtesy of Rebecca Dussault

When cross-country skier Rebecca Dussault hit the Olympics course for Team USA in Torino, Italy, in the 2006 Winter Games, she literally wore her Catholic faith on her skis.

Dussault wrote “Blessed Frassati” across her skis, a tribute to Pier Giorgio Frassati, an early 20th-century Italian Catholic skier dedicated to the poor and sick she adopted as her patron saint.

“He was an ordinary guy,” Dussault, now a trainer, said from her Colorado home. “He was all about everything I was trying to do and he was 24 when he died and I was 24 at the time. I thought, this is a godsend — to have this extraordinary person in my life.”

Dussault also brought her mother, husband and son to Torino. Her Catholic family, she said, formed a kind of “traveling church” amid the intensity of Olympic competition.

“For me, that was very healing,” Dussault said. “The Olympics were a very physical experience but for me it also had that spiritual side, a whole other layer. It was why I was there. It was a mission.”

But as for giving her a competitive edge, Dussault says no. She jokes that if she had won a medal, it would have been a miracle due to Frassati.

Still, her faith lent her a perspective that pushed her through the grueling 30 kilometers — about 19 miles — of her event.

“Faith helps you cope with suffering and pain,” she said. “It pulls you into a sacrificial place, it pulls you out of sloth so you can suffer well and find meaning in places where a purely secular athlete may not probe those depths.” 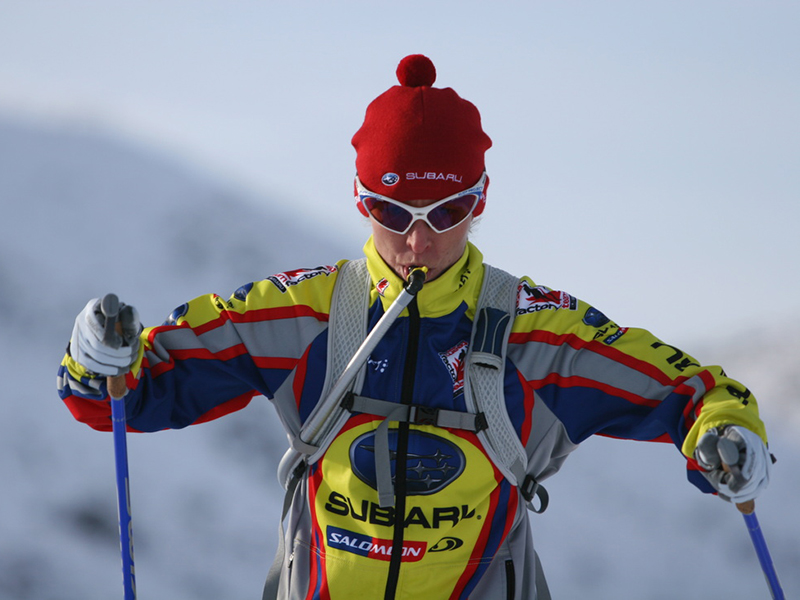 Rebecca Dussault says her faith gave her a perspective that helped her through the grueling portions of her event. Photo courtesy of Rebecca Dussault

Ray McKenna, the founder of Catholics for Christ, said Catholicism rejects a “rabbit’s foot theology” — the “pray to win” ideology evident at many professional sporting events — and approves a more holistic theology that blends spirit, mind and body.

“Sports and God are related to each other in that the proper understanding of both improves your ability both as a believer and as an athlete,” he said. “You are fully actualized if you have the body, the mind and the soul all working together. Athletes know that.”

Some studies suggest athletes tend to be more religious than nonathletes, but other studies show just the opposite.

A 2004 study showed several reasons some athletes are religious. First, athletes may be attracted to a religion’s link between humility and direction — it’s hard to pursue athleticism at an elite level without a commitment to a goal or purpose.

Religion, the study’s authors write, “provides a cognitive framework” that athletes can use to understand the “why am I doing this?” part of elite competition.

“Faith is not a substitute for hard work, perseverance or talent,” said Joel Fish, director of Philadelphia’s Center for Sport Psychology, who has worked with athletes at the Olympic and professional level. “But when those bases are covered, I believe faith, for certain athletes, can be a source of comfort, of motivation, of consistency.”

Fish saw this firsthand with a Jewish track athlete who recited softly to himself before each meet, “God, give me the courage to do the best I can do.”

“It was like a mantra for him,” Fish said, noting the athlete said it twice while toeing the starting line. “I think it served as a mental anchor that helped him focus on the task at hand and stay grounded.”

But Fish notes religion is not a prescription for athletes — say two Hail Mary‘s or recite the Shema Yisrael before a meet and God will reward you.

“It has to be something that is genuine and sincere,” he said. “It has to be part of the person for them to be able to develop it as a sort of mental anchor.” 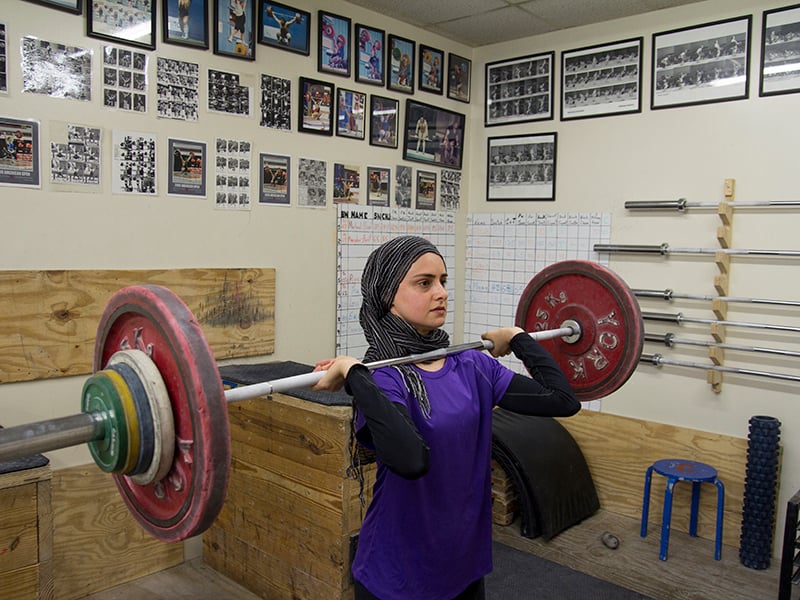 Kulsoom Abdullah, a Pakistani-American competitive weightlifter, was initially drawn to sport by a hadith — a saying attributed to the Prophet Muhammad, the founder of Islam.

“It says the strong believer is better than the weak believer,” she said in a phone interview from Atlanta, where she is a data scientist. “That was the piece for me. I wanted to be strong and independent.”

But in 2011, Abdullah almost didn’t get to compete in the U.S. National Weightlifting Tournament because of her hijab, long sleeves and leggings. The rules required bare elbows, knees and head, which she believes is counter to Islam’s sense of modesty for women.

USA Weightlifting changed its rule and Abdullah became the first woman to compete in weightlifting in a hijab in international competition.

“Religion helped me with mental benefits” as she pursued weightlifting, she said. “I was trying to be as better a person as I could be.”

This week, she watched as Ibtihaj Muhammad became the first U.S. Olympian to compete in hijab, in this case fencing. (Muhammad was eliminated in individuals but will compete with Team USA on Saturday.)

Today, Abdullah competes less for her personal spiritual journey and more for the journey of others.

“I knew I wasn’t going to get a medal; that was never the goal,” she said. “But the stronger I am, the more I can help myself and help others. That is a nice feeling to be able to do that.” 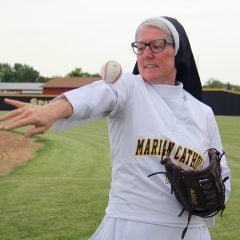 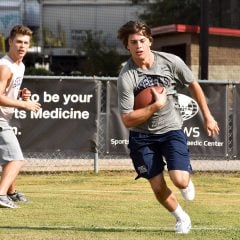