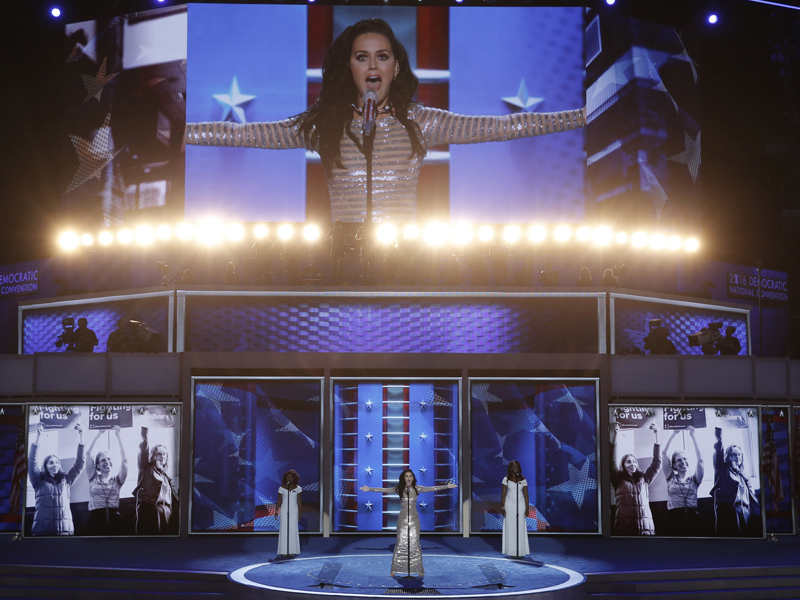 Singer Katy Perry performs on the final night of the Democratic National Convention in Philadelphia on July 28, 2016. Photo courtesy REUTERS/Jim Young. EDITORS: This photo may only be used with RNS-HUDGINS-OPED published on Aug. 12, 2016
August 12, 2016
guest

(RNS) Early in 2014, scholar Diana Butler Bass reminded us of the phenomenon of American civil religion. Like other institutional forms of religious expression, she argued, it was being replaced with spirituality ... an American civil spirituality.

Since that moment, I’ve been trying to answer a related question. What are the hymns, psalms, and spiritual songs of this civil spirituality?

This year’s general election is providing a rich soundscape for discovering just what they might be.

Various media outlets have covered the now well-known kerfuffle around the Republican National Convention’s music. The Los Angeles Times has even provided a Spotify playlist. Did the house band really play “You Can’t Always Get What You Want” at the close of the GOP presidential acceptance speech? A curious choice, to be certain.

The most famous aspect of the event’s music, however, is the number of musical artists who asked the GOP to stop playing their music. The artists do not wish to be associated with the candidate, Donald Trump. Third Eye Blind even went so far as to accept an invitation to perform at the convention and then criticize the candidate from the stage.

If we turn to the candidates' campaign music we learn a great deal. Hillary Clinton has a playlist on Spotify. "Fight Song" and "Happy" frame a positive can-do attitude from the candidate. Trump, on the other hand, leans toward Broadway anthems like "Memory" from "Cats" or "The Music of the Night" from "Phantom of the Opera." Both candidates are trying to tell us something about themselves and their vision for America.

This general election has seen more strife around its soundscape (that aural parallel to the landscape) than any election I can remember. From the musical gaffes of the RNC to the pop performances of the DNC, there has been conversation about what a presidential campaign should sound like and who gets to decide.

Both campaigns are borrowing music from the American civil rights era, from Simon and Garfunkel to the Rolling Stones. The candidates hope that these are the sounds of a populist revolution that can reach everyone from the nonreligious to evangelicals.

So I wonder: Are we seeing the hymn writers express their own opinions on the content of what makes for American civil spirituality? The listener, of course, also has a great deal to say about what the song means or doesn't mean. It is a complex arrangement.

Apparently, a civil spirituality needs a soundtrack and we are being offered a rich one in this election cycle.

A presidential candidate reflects the spirituality of the nation he or she hopes to lead. So, what it sounds like matters.

What is at stake is the heart and soul of the United States. This is a general election unlike any other. And if Bass is correct, the soundscapes presented have become form and fiber of our civil spiritual soundscape.

These are now our hymns, psalms, and spiritual songs.

(Tripp Hudgins is a doctoral candidate in liturgy and ethnomusicology at Graduate Theological Union, Berkeley, Calif.)